An awkward feminist production focused on the objectification of women that attempts to ‘turn the coin’ on Oscar Wilde’s misogynistic play.
David Barmby 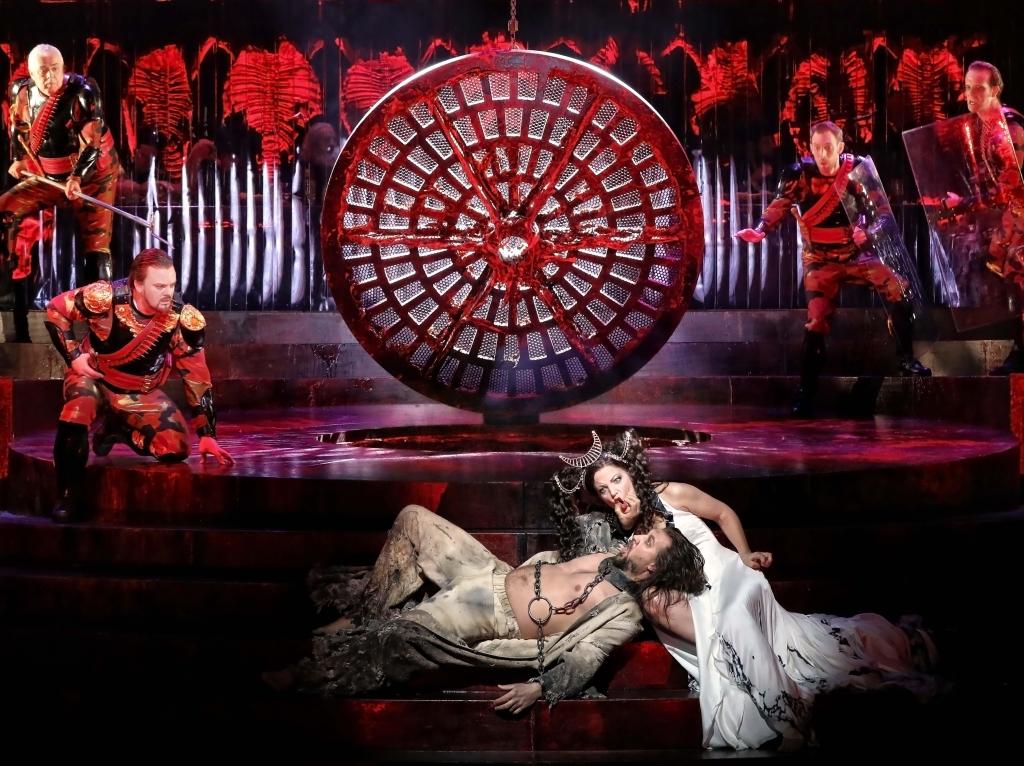 Richard Strauss’s opera Salome (1905) – based on Hedwig Lachmann’s German translation of Oscar Wilde’s French play by the same name – is based on the biblical account of the death of John the Baptist (Jokanaan in Hebrew) in the gospels of St Matthew and St Mark. The play and opera are a potent cocktail of religious piety, corruption, decadence, mockery, eroticism and brutality fashioned for the fin de siècle taste and still relevant to us all today.

Strauss’s one-act opera was a scandal with immense subsequent success. The work’s immediate notoriety led to it being banned from several major European cities, while productions in London and New York only encouraged its popularity wherever it was subsequently allowed to be staged. Mahler in Vienna shouted that the opera was the product of an unequivocal genius while even a touring Elgar in New York refused to acquiesce to public moralistic outrage. The work was Strauss’s third opera and first success in the genre.

In this Opera Australia production, Lise Lindstrom is superb in the strenuous role of Salome. She is on stage virtually from the beginning until end with the most taxing singing saved for the very end with an ‘aria’ of sorts, Es ist kein Laut zu vernehmen (There is no sound) lasting more than 16 minutes until the cathartic conclusion when she is murdered. The range of the role over two octaves was taken by Lindstrom in her stride reaching some of the lowest notes with a threatening growl. Only in the Den Kopf des Jokanaan (The head of Jokanaan) section where Salome must project strongly in her chest voice over the orchestra was there a sense of roughness and strain, not unsuited to the prevailing dramatic circumstances.

The implacable and uncompromising fanatic John the Baptist (Jokanaan) was magnificently portrayed by Russian bass-baritone Alexander Krasnov with only his highest notes occasionally showing strain and weakness on opening night. Filthy and dishevelled, his horror at Salome’s attempted seduction was powerfully convincing. Jacqueline Dark was a memorably grotesque Herodias, her opulent voice perfect for the role and her costume and millinery (Julie Lynch) quite extraordinary.  Her mocking of her husband offering Salome his precious white peacocks was hilarious. Andreas Conrad provided a powerfully neurotic, equivocal and lascivious Herod, though his voice was also underpowered on opening night within this acoustic.

Save for the expansive lyricism of his opening music Wie schön ist die Prinzessin Salome heute Nacht! (How beautiful is the Princess Salome tonight!) Paul O’Neill as Narraboth was mostly underpowered, though his dramaturgy as an infatuated servant of Salome was sincere and convincing. Sian Pendry’s rich mezzo expressed the forewarnings of the Page/Slave effectively while Virgilio Marino, Brad Cooper, Benjamin Rasheed, Tomas Dalton (replacing John Longmuir) and Andrew Moran had a splendid time in ensemble as frenzied theological agitators. David Parkin and Christopher Hillier as Nazarenes, Gennadi Dubinsky and Ryan Sharp as soldiers and Alexander Hargreaves were all powerfully conveyed.

The unsatisfactory, ‘contained’ acoustic of Joan Sutherland Theatre aside, what didn’t help was that Strauss’s luxurious orchestra of over 100, essential to the success of any production, is here reduced by Opera Australia by a full third. The deficit is largely found in the strings. To be specific: five first violins, eight second violins, five violas, two cellos and three double basses were absent as they simply could not fit into the pit. An expanded brass section with several extras to the permanent orchestra revealed some ‘rough and ready’ playing on opening night, particularly from horns and trombones. Fritzsch’s conducting was precise and effective, using ‘a light bow’ as Strauss recommended throughout and always drawing thrust from the orchestra when needed, as well as gentle Viennese lyricism throughout.

But it was Gale Edwards’s production, first seen in 2012, that had significant problems. The work is psychological theatre and in this area the production lacked all subtlety. There is no ironic chemistry between manipulative Salome towards the comparatively two dimensional Jokanaan. Sure enough he is represented at as a haggard, defeated and withering maniac but her hungrily erotic and unnecessary physical groping is too literal and robs the character of all gravitas. Despite her initial virginal innocence symbolised by the pale moon, Salome must be unhinged from the start. She does not really lust for John the Baptist. He’s dispensable. She must play and manipulate him. Salome is just spoilt, bored and is used to getting her own way. Narraboth’s suicide happens to the side as if for nothing when it should be a coup de théâtre with Salome instructed to step over the body.

The Dance of the Seven Veils here was interpreted as seven professional dancers and acrobats, one per veil and each demonstrating a different flavour of stereotypical objectification of women. We had a Benny Hill-like chamber maid with feather duster, a talented pole dancer, Marilyn Monroe with sunglasses in her famous pleated and blown white dress, an astonishing Madonna-cum-go-go-dancer-stripper, a circus acrobat on straps and most disturbing a girl in nighty with teddy bear performing above the centrally placed and capped cistern (or dungeon) where Jokanaan resides. It was not difficult to surmise that this illuminated hole in the ground that Salome straddles, legs apart facing Herod, serves as symbol for a giant vagina. The walls were hung with the carcasses of dead beasts, Sir Francis Bacon-like, illuminated in fluorescent colours; ‘fresh meat’ being the inference.

That said, there were other continuity and technical issues. Set at the time of Jesus, why were Herod’s guests a combination of Chassisic Jews (with 17th century head dress), Greek Orthodox Bishops, a Roman Catholic Bishop and a Buddhist or perhaps Hindu? Strauss had little truck with any religion. Was this an effort to distract from the fact that the entire cast of this opera, including John the Baptist, are Jewish? But why is Herod and Herodias’s feast at the opening placed up stage in full view of Jokanaan being released from the cistern when Herod has specifically instructed his soldiers to prevent this?  Why is Jokanaan’s dungeon lit from within when the libretto demands that it is dark, and why therefore does he hide his eyes from glare when he exits it into moonlight? Why is there no cup to be seen when Herod shouts that his cup is empty? I could go on.

This is a work that is difficult to get right but I feel Opera Australia’s production team could have done a lot better had they been less focussed on sensational effects.

Most concerning was that this work requires vast space, awe, air, resonance and gravitas, none of which was evident here in this cramped space and production. Salome’s Ich bin Salome, die Tochter der Herodias, Prinzessin von Judäa should be a glorious climax, not an afterthought.