An interesting and at times confronting exhibition that showcases Borland’s work over the last decade.
Mem Capp
[This is archived content and may not display in the originally intended format.] 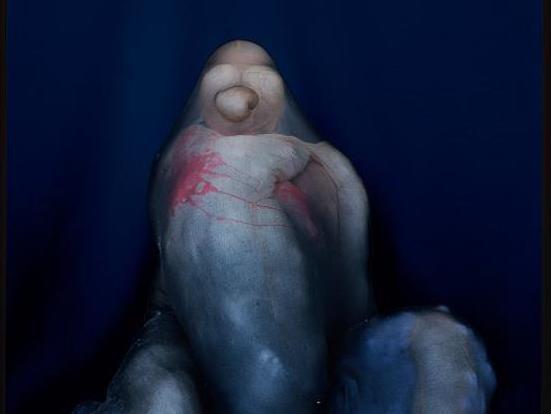 When the Swiss psychiatrist Hermann Rorshchach began splattering ink on paper in 1917 and asking his patients what they saw, he was trying to gain greater insight into how we process information and what happens at an unconscious level. The Australian born, L.A. based artist Polly Borland is also interested in exploring these unconscious processes. Polly Borland: Polyverse, currently showing at the NGV Federation Square, intuitively brings to the surface elements of her unconscious struggles and in so doing encourages the viewer to reflect on their own unexamined bias and ways of seeing . Drawn from five major series produced over the last ten years, the exhibition explores the working of the psyche through analogue photography and film; documenting the evolution of her work from earlier portrait, costume/prop based figurative photographs to her present more abstract sculptural pieces.

After studying at Prahran College, later to become part of Victoria College of the Arts, Borland came to prominence in the 1980s through portrait commissions and magazine work. After relocating to the U.K. in 1989 with her film-maker husband John Hillcoat, she continued magazine and portrait work: her photograph of Queen Elizabeth II, (2001), for the Golden Jubilee and her unsettling Babies Series, (2001), bringing her into public consciousness. Borland is also the recipient of the John Kobal photographic Portrait Award, (1994) and the Josephine Ulrick and Win Schubert Photography Award, (2017) and her work is represented in both national and international collections. In 2013 a documentary on the artist and her work, titled Polymorphous, directed by Alex Chomicz, was aired on ABC television.

Situated on the third level of the NGV, the exhibition can be accessed via lift or stairs. Large gallery spaces flow comfortably one to the next, allowing easy movement and viewing through each space; the work is supported by text and didactic panels.  Untitled III, (2004-5), a cibachrome photograph from her Bunny Series, depicts the English actor Gwendoline Christie in a contorted pose and dressed in a leotard bunny costume; making the image more child-like than sexualised, despite the upper part of her torso being exposed, it subverts the idea of the play boy bunny girl.

Untitled XXXII, (2010) from the Smudge series, a cibachrome photograph, also draws from childhood memories. In this work the musician Nick Cave has become unrecognisable in garish blue wig and smudged make up; gender is blurred. His face no longer an icon as frontman for a well known band but obscured and unsettling.

The use of confronting subject matter by artists such as Diane Arbus, Mike Kelley and Paul McCarthy and film makers like Pasolini and Fassbinder inspired the young Borland and their influence can be seen throughout her oeuvre. Works such as Gag, (2017), an inkjet print from the Monster series, confronts the viewer viscerally;  the feeling that one cannot quite get enough breath induces a sense of anxiety. But the image also touches on uncomfortable notions of the psycho/sexual with a transparent stocking pulled taught over the figure’s head and upper torso; a red painted oval obscuring the mouth, or a scream or a breath. This figure, gagged, has become voiceless, powerless/imprisoned, referencing in some way perhaps Borland’s own experience of dislocation after moving to L.A.

Tapestries of Borland’s work produced by prison inmates in the U.K. as part of a rehabilitation program are included in the exhibition and add an interesting textual quality to the show: both sides of the works visible allow the viewer to see the working beneath the surface, like the unconscious, revealing the personalities of their makers.

The images that form Borland’s latest series Morph (2018) however, produced specifically for this exhibition, are perhaps the most realised or successful visually: large formate, archival pigment prints, this body of work depicts grotesque, disembodied figures that are more abstract in form and painterly in quality, blurring boundaries between mediums of paint and film. Those on lenticular cardboard, presented in concertina fashion, heighten the sense of dysmorphia explored throughout the show and represent a move into the more sculptural.

An interesting and at times confronting exhibition that showcases Borland’s work over the last decade.