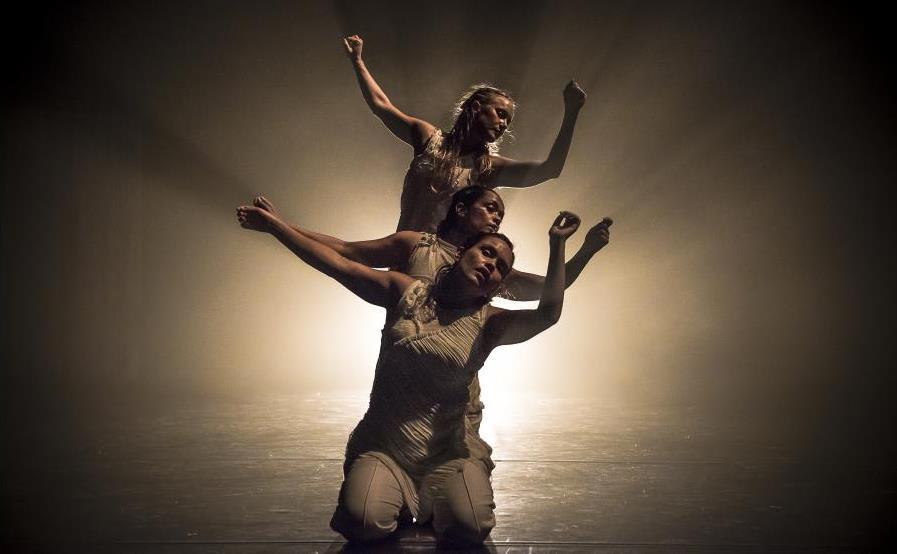 mi:wi brings on stage a powerful feminine energy that weaves together past, present, and future stories of human connection and disconnect from nature. Culture and nature have been in harmony, feeding off each other, but increasingly humans have an extractive attitude towards nature. If this trend continues, we set our own demise. Reconnecting to ancestral practices might enlighten the way forward.

The stories of mi:wi are recounted through dance theatre choreographed by Taree Sansbury, who also features onstage together with Katina Olsen and Keia Mcgrady. The choreography of Sansbury, a proud Kaurna, Narungga and Ngarrindjeri woman, is inspired by the stories of her grandmother, and in particular by her concerns that the drought which hit South Australia in the early 2000s could have jeopardised the continued existence of her culture. Climate change and drought threaten Ngarrindjeri culture by reducing the availability of the rushes used by Ngarrindjeri women to weave traditional baskets, an ancient practice through which women connect to Land and with each other.

Furthermore, the performance weaves together different stories with musical assistance. The music and sounds help the audience navigate the transitions. Dark, muffled sounds are the background of the opening scene where Mother Nature struggles against a tight rope tied around her waist. More melodic tunes accompany underwater dances. And broken cacophonies raise anxieties about a robotic future.

The three dancers are expressive, although not always in sync as expected. They bring on stage different energies and qualities, and they convey a beautiful sense of solidarity and female support network. This is particularly resonant in the part of the choreography where the three move in unison until each of them, one by one, drifts off in a restless dance and is pulled back in by the gentle touch of the others.

Cheryn Frost’s lighting design does an impressive job in inducing atmospheric changes and exalting the choreographic expressions of the dancers. It immerses them under water, illuminates their path forward, and recasts them into large and powerful figures as shadows onto the wall.

The performance is unmistakably didactic as underscored by the introduction of a video featuring Sansbury’s grandmother talking about Ngarrindjeri weaving. It conveys a message about the urgent need to reconnect with nature, which is expressed not through words, but through moving bodies, sounds, and lights that evoke strong emotions.

mi:wi is part of a double bill with CO_EX_EN which will show at QPAC next week.