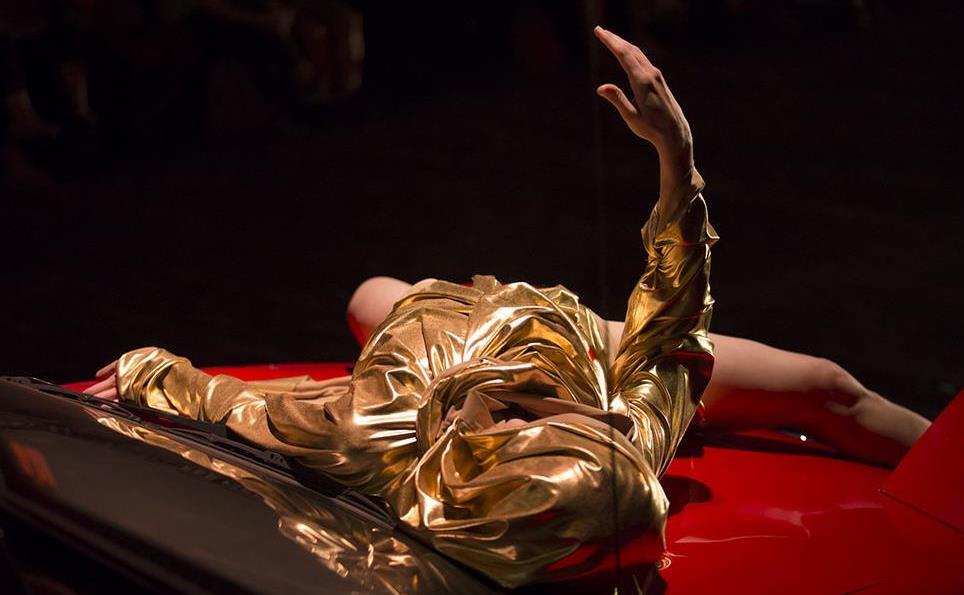 First realised in Melbourne in 2016 and again in Perth in 2018, Aphids’ Howl is a work of performance art in the form of a parade. Howl’s creators – Liz Dunn, Lara Thoms and Willoh S Weiland of longstanding, internationally renowned artist collective Aphids – state that, ‘Howl sets itself at the intersection between parade, protest and procession,’ and their intention is to show how society can be unsettled by art (Howl catalogue, AGSA, 2020). The title Howl is from an Allen Ginsberg poem of 1956, for which his publisher, Lawrence Ferlinghetti, was arrested for obscenity.

The Howl parade commenced inside the Art Gallery of SA with the audience lining a narrow runway roughly 25 metres long in the Elder Wing of Australian Art. A sequence of 15 short performances unfolded, each referencing a well-known and highly controversial artwork that has challenged artistic, cultural or political standards. The performers paraded to musical accompaniment, primarily WA Mozart’s Requiem in D Minor (1791) that created the solemn feel of a funeral march, as if subversive art has died.

Howl features several confronting works that raise the question of what constitutes pornography and how it relates to art, including a representation of Gustave Courbet’s 1866 painting l’Origine du Monde, which depicts a woman’s crotch. In this version, a woman in a gold cape designed to reveal her naked lower half strides confidently down the length of the runway and is then wheeled along it, an act that may be interpreted as a celebratory rejection of censorship or as exemplifying the objectification of the female body.

Andres Serrano’s Piss Christ (1987), which was the subject of attacks by Cardinal George Pell and others when shown at the NGV in 1994, was represented by a woman – rather than a man – wrapped in yellow cellophane. Charlie Chaplin’s film The Great Dictator (1940), which critiqued Adolf Hitler, fascism and antisemitism, was represented by a figure dressed as Chaplin in the role of Hitler. This was followed by a quote from Hitler’s 1937 speech condemning degenerate art, perhaps implying that today’s fascists might consider contemporary art, including the art in the AGSA, to be degenerate. Or possibly suggesting that those who don’t appreciate the art in the AGSA must be fascists.

Part way through the event, the audience was ushered to an enclosed laneway outside the Gallery for larger scale performances and handed copies of the Howl catalogue that elucidated the artworks, many of which might be unknown to today’s audiences. Here we saw Marcel Duchamp’s Fountain (1917) characterised by a giant urinal inside which three figures squirted water from their mouths to simulate a fountain.

The Adelaide version of Howl was updated to include some local art references – Berlinde de Bruyckere’s We Are All Flesh (2011-2012) and Adelaide artist Margaret Dodd’s film This woman is not a car (1982). Dodd’s landmark film was represented by a lovingly restored HR Holden being slowly driven behind a woman wearing a bra comprising two car headlights and squirting what looked like blood from two bottles. De Bruyckere’s We Are All Flesh, a sculpture comprising two horse hides stitched together and hanging from the AGSA ceiling, was represented by a pantomime horse walking behind a figure carrying meat-hooks. De Bruyckere’s work caused a public outcry when acquired by the AGSA as part of its 2012 rehang.

Jason Wing’s Australia was Stolen by Armed Robbery (2012) was exemplified by a masked figure in 18th Century garb riding a Segway. Imagery from the Escape from Woomera video-game (2003), by the Escape from Woomera Collective, was projected onto white sheets. Though Australia Council-funded, Escape from Woomera critiqued the government’s asylum-seeker policies. The event concluded with a reference to Paul Yore’s Everything is Fucked (2013) that prompted police intervention, an intervention that was subsequently criticised by the magistrate. Several performances were somewhat opaque and the Howl catalogue’s description of the original artworks and related controversy generally enabled a better appreciation of them than the performances alone could provide.

Aphids’ light-hearted commemoration of these artworks can appear to neutralise their significance rather than to reengage our interest in the issues they addressed, encourage subversion or elicit further critical reaction – no one was arrested, and it was a fun evening. But it’s good to be reminded of these legendary works. Aphids’ Howl reconsiders the potential of art to effect change and raises awareness of the political and legal obstacles artists face in creating subversive art.

Chris Reid is a freelance writer on art and music. He is Chair of the Academic Board at Adelaide Central School of Art and Program Manager for Flinders University Lunchtime Concerts.