A weighty, admirable yet bleak work for the end of days.
Lynne Lancaster 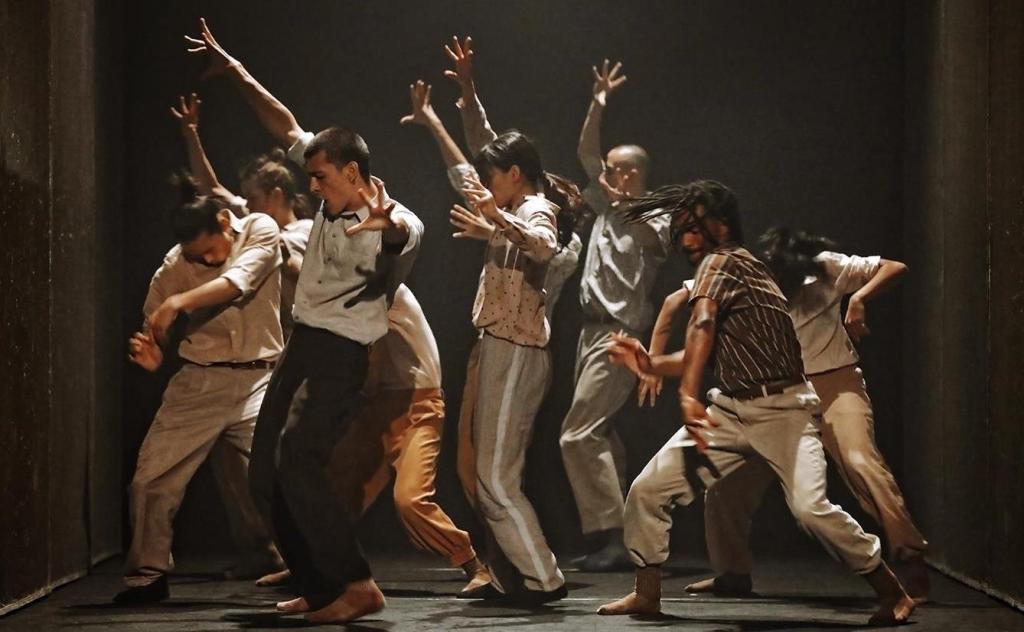 This is the Sydney premiere of Hofesh Shechter’s work. Interstate audiences might be familiar with his Sun or Political Mother.

It is bleak and apocalyptic, one of those works where, while you admire the individual elements of the production, it leaves you rather ambivalent.

The breathless, relentless energy of the cast is amazing. The atmosphere is intense throughout, full of fear and chaos and a preoccupation with Death.

Tom Scutt’s set design consists of very large movable panels that sometimes join or part to reveal another striking image. They continually shift and reform and can represent oppressive borders and the fracturing of relationships. It can be quite ominous and claustrophobic. The lighting by Tom Visser is superb and atmospheric.

Musically the show is multi-layered too – there is an electronic, at times throbbing and thumping soundtrack that Schechter devised. This is contrasted with the marvellous live string quintet of musicians who play, among other items, arrangements of Lehár and Tchaikovsky, which add even more undercurrents to moving scenes of the show.

A highlight is the ironically romantic scene that takes us to interval, full of the fragility of life, with a rain of bubbles to the Merry Widow Waltz that is at first joyous, but then the destruction continues (in some ways, quite Pina Bausch-like perhaps). The curtain falls on the first half with a dancer slumped in a chair and a sign that reads ‘Interval’. When we return the sign says ‘Karma’, as the quintet of musicians leads the audience in a sing-along.

The first half is quite reminiscent of continual war, but also the various street protests throughout the world, whereas the second half is perhaps a little lighter in mood and possibly more a celebration of the resilience of community spirit.

In terms of choreography, it is full of repetition and measured intricacy and includes knee spins, explosive jumps on the spot and references to Israeli folk dance and other ‘line’ dances , as well as ironic ballet bows. At times the movement is constricted and tumultuous, fists angrily waved in the air, yet at other times there are tiny, sensitive, intimate movements that seek to break free.

There is extensive ensemble work from the 10 casually dressed dancers as well as some sensational small solos and duets, and some writhing groups. But there’s also a sense of repetition and desolation as a dancer slumps and is dragged off stage. They change constantly between slithery floorwork and standing movement.

Grand Finale is a weighty meditation upon the possible end of the world, with the dancers as stranded survivors – an evocation of social unrest and struggles for freedom, with a sense of endurance, yet also despair and growing hysteria: a brief party for the end of time.