An institution for women set up by Charles Dickens in the 1840s was the inspiration of this production by She Said Theatre.
Liza Dezfouli
[This is archived content and may not display in the originally intended format.] 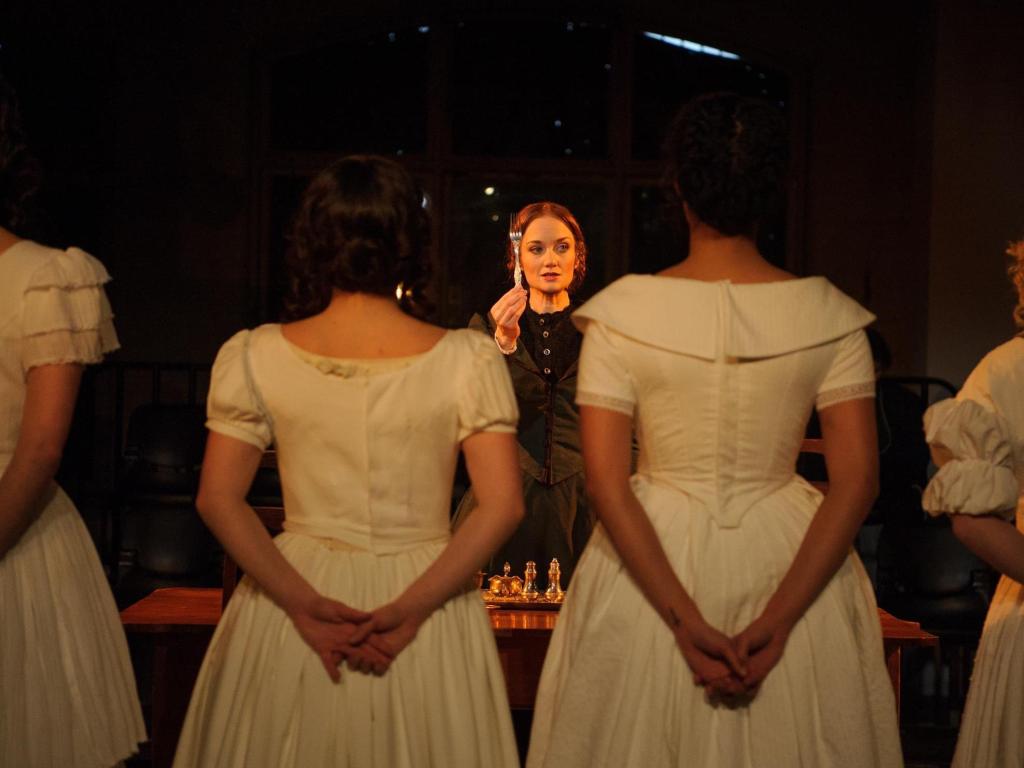 She Said Theatre takes the story of Urania Cottage, a home for ‘fallen’ women set up and managed by Charles Dickens in Victorian London, as the basis for Fallen. Urania Cottage was established as a reform home combined with refuge: an institution to help female unfortunates, destitute, disgraced or both, establish a new identity by giving them training in the social niceties. There were, however, conditions attached to being able to live at Urania and avail themselves of the chance to ‘begin life afresh’. The women must agree to being shipped out to the colonies, either to go into service or to make suitable matches. And they were to never speak of the past.

Fallen was written by Seanna van Helten and is directed here by Penny Harpham.

Five young women, Isabella, Rosina, Martha, Julia and Georgia (Artemis Ioannides, Jing-Xian Chan, Tahlee Ferreday, Gemma Bird Matheson and Veronica Thomas), are schooled in manners and appropriate behaviour by Matron (Zoe Boesen). Matron is scarcely older than her charges; we find little about her except that there was once a husband and he was ‘a good Christian man’. The young women, bored, confined, frustrated and with almost no intellectual or creative outlets, turn on each other, shift alliances, act out in snaps of violence and tiny betrayals. Their bonds are deep and emotional and Matron is as vulnerable to the power dynamics as the girls are, even when alliances are created by her. 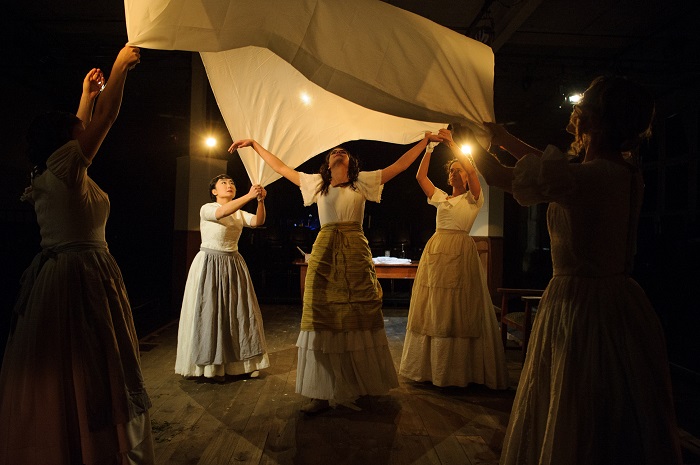 The theatre space at fortyfivedownstairs is set up in the round, the oblong stage dominated by table and chairs on floorboards, with removable boards lifting away to create garden beds. Set and costume design is by Chloe Greaves. The girls are all dressed in virginal white and Matron is in dark grey, her more complicated attire underlining her superior status. A dormitory setting is created by beds which fold out from cupboards at each corner of the stage. The simple set reinforces the smallness of this world. The young women are observed from all angles as their immaculately coiled and plaited hair styles begin to unravel. The atmosphere of repression is palpable.

Silenced stories will out, in some way, and so much of the tension created in this superb production is in the power of the unspoken.  We see the workings of the construction of the ideal feminine woman, so dependent on form and lies and silence. The narrative, informed by the characters’ untold interior lives, makes you think about the way we’re made as women today, of what we can and cannot say. You question notions of privacy, of dignity, of acceptabillity.

Matron’s psychological dominance is challenged by Ioannides’ non-conformist Isabella who insists on naming how painful it will be for them to separate, to head off into the unknown. She names machinations. We fear for them all. The performers are all terrific and their characters so distinct, but Zoe Boesen is so compelling as Matron that you can’t stop watching her. She dominates every scene she’s in with a formidable mixture of authority and concealed tenderness. There is so much rage, grief, unexpressed sexuality in the space and she’s trying to control it all. Boesen’s extraordinary in her portrayal of Matron’s own moments of internal frailty doing battle with a kind yet conflicted nature and her resolute hold over her charges. It’s not often you see such a fully-drawn character onstage. The scene where she demonstrates items of cutllery to the girls is unforgettable. What power.

Hats off to everyone involved in Fallen. It’s a fabulous work.