It’s easy to let the trajectory of the aural-optical assault wash over you, but blink and you’ll miss it all.
Leah Milanovic
[This is archived content and may not display in the originally intended format.] 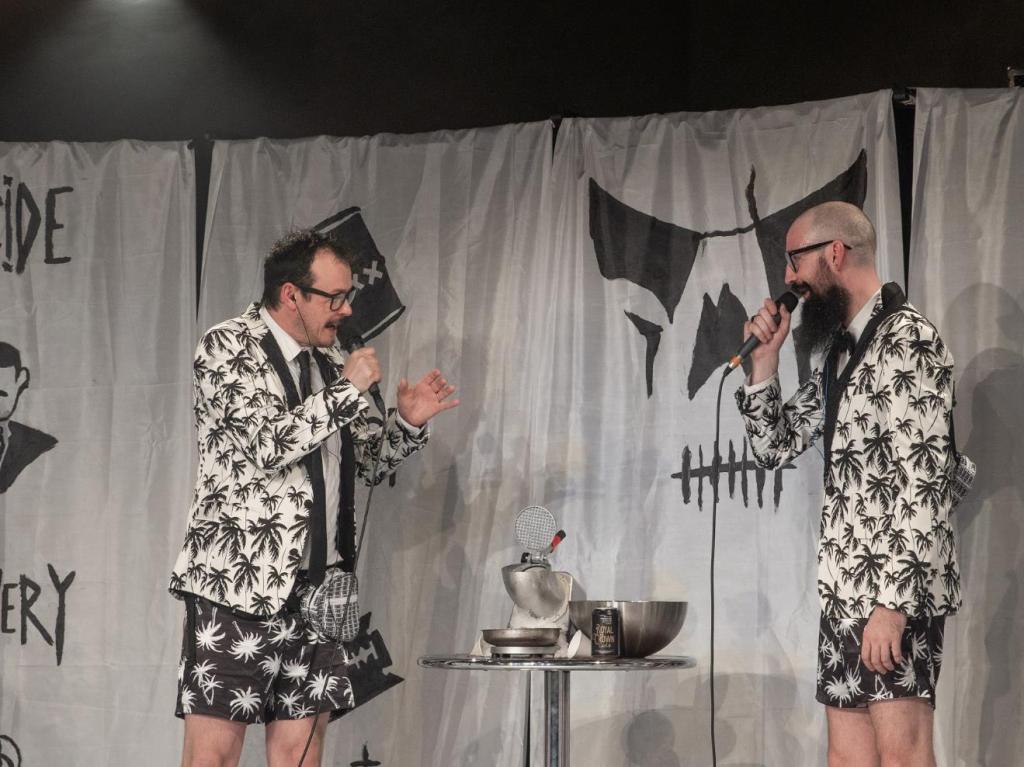 Doppelgangster’s Cold War is an aural-optical assault. Presented at Prague Fringe by international performance company Doppelgangster (Tom Payne and Tobias Manderson-Galvin), Cold War takes place on two planes that don’t necessarily link. On one plane you’re following what’s been said – a pieced together conversation not dissimilar to an evening on your apartment balcony when your socially aware neighbours are also out on the balcony above you, trying to make sense of the world. The other plane follows the visual – you’re distracted by Payne hopelessly flying a drone into the stage lights and Manderson-Galvin flitting somewhat erratically between the stage and the seating to share out a handful of snow cones.

Costuming appears to be a massive clue in understanding Doppelgangster’s Cold War. We begin with the actors in plastic coveralls with masked faces, but by the final scene they’ve done away with their masks and stripped off most of their layers. The shedding of layers suggests a world heating up while the removal of the masks shows an increasing level of confidence in the characters portrayed; as though the discussion of the last pairing holds the most authority.

Had the song breaks all been cut in half, there would have been more time to pace easy and pause through the script. Honestly the music breaks felt too long, but there was definitely something wicked about repetitive, catchy slogans being screamed at you (propaganda anyone?). Unfortunately, as much as I tried to remember these slogans, as soon as the next scene with its fast dialogue and conflicting actions arrived, I’d forget them. I spent one scene repeating ‘Titanic was an inside job’ in my head because I’d found it so ridiculous I wanted to burn it into my brain.

If you’re headed to Doppelgangster’s Cold War, go with sharp eyes and ears. It’s easy to sit back and let the trajectory of the assault wash over you, to feel the chaos reverberate through you, but blink even once and you’ll have missed it all. I’d go again in a heartbeat and most likely I’d have a completely different experience.

Leah Milanovic is a graduate of Deakin University having completed a Bachelor of Arts (Hons.) with a triple major in Creative Writing, Literature and Children’s Literature. She has participated in two cultural exchanges to Japan and South Korea as well as pursued her creative interests with a fellowship at New Pacific Studio, New Zealand. Leah is currently travelling Europe as a volunteer.