Sit back, open your heart, and go on an incredible journey.
Reuben Liversidge 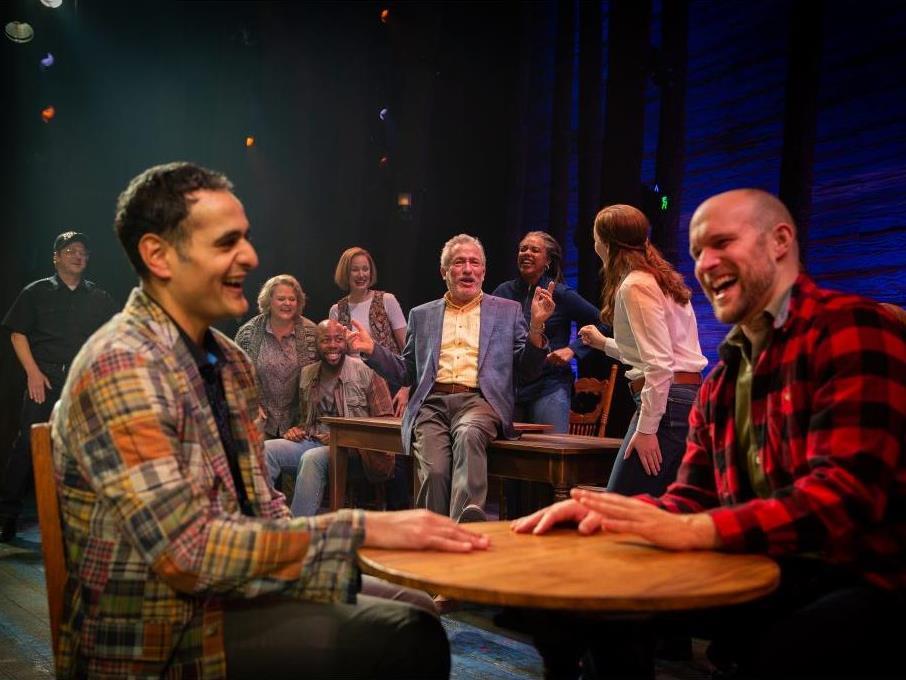 Nicholas Brown, Douglas Hansell and the original Australian company of Come From Away. Photo: Jeff Busby.

There’s a lot of bad news these days and it’s easy for one to become hopelessly disillusioned with the state of the world. The frigid Melbourne winter is enough to get you down too. Just in the nick of time, along comes the latest blockbuster musical import to open in our city, Come From Away. This heart-warming show will lift your spirits and restore your faith in humanity (at least for 100 minutes).

This extraordinary true story takes place moments after the 9/11 terrorist attacks of 2001, when 255 aircraft were diverted to 17 different airports across Canada after American airspace was closed by the US government. Dozens of these planes landed in the small town of Gander on the island of Newfoundland; the musical documents how this small community took in and cared for over 6,000 passengers from all over the world over a period of five days. This might sound like unlikely source material for a musical, but any trepidation is quickly allayed as soon as the opening number, ‘Welcome to the Rock’ explodes onto the stage of the Comedy Theatre.

For the next intermission-less hour and a half the audience is transported to Gander during this tumultuous time in history, where we meet the locals and ‘the plane people’, and watch as they attempt to take control of an impossible situation. Lasting friendships are forged, couples hook-up (and break-up), an overwhelming sense of love radiates from the stage, and everyone kisses a cod.

The original Australian company of Come From Away. Photo: Jeff Busby.

It’s easy to see why this little show has been such a massive international success, winning Olivier and Tony Awards and playing to packed houses on Broadway, across the USA and in London’s West End.

The direction by Christopher Ashley and musical staging by Kelly Devine is simple and superb. The 12 member ensemble play multiple roles and create the entire world of Come From Away using wooden chairs, quick costume changes, a centre stage revolve and not much else; one minute we are in the cabin of an airplane and in the blink of an eye we are hiking through the mountains.

The show never stops moving and the eclectic musical score follows suit by blending song into song and moment into moment. Married writing team Irene Sankoff and David Hein are responsible for the book, music and lyrics and each element is skillfully integrated into the story and staging. This fluid amalgamation of scenes and songs makes it difficult to single out particular moments. There are no standard ‘I want’ songs or ’11 o’clock’ numbers (although ‘Me and the Sky’ comes close) and there aren’t many opportunities for the audience to applaud throughout. But that’s just fine because Come From Away offers a unique musical experience; you just sit back, open your heart and go on an incredible journey.

The predominantly Australian cast are glorious. There’s a beautiful mix of ages and looks in the ensemble and they are all perfectly cast to represent their real-life counterparts. Experienced actors such as Richard Piper share the stage with emerging talent such as Sarah Morrison and there are no starring roles; everyone works together to tell this inspiring story. They absolutely nail the unique dialect (a challenging mishmash of Irish, Scottish, Welsh and American) and switch from character to character with astonishing dexterity. How revitalising it is to see a cast of local talent performing in a hit international musical.

Come From Away is smart, incredibly moving and refreshingly down-to-earth. It successfully avoids sinking into soppy sentimentality by exploring the despair, confusion and hopelessness felt by these displaced characters. The generosity and acceptance of the people of Gander is an inspiration to all of us and Come From Away is one of the most uplifting pieces of theatre you will ever see.