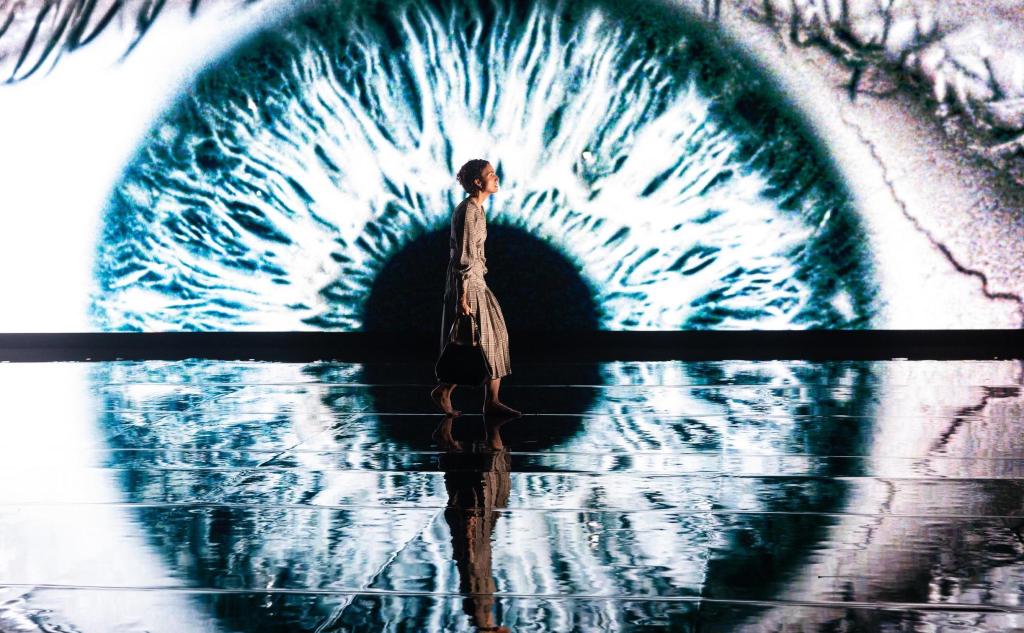 Over two days in March, before the theatre was closed due to the Covid-19 crisis, SCO was able to stage their production of Breaking Glass, syncronising it to the studio recording with over three weeks of intensive editing to meticulously marry sound and vision. The result, a world premiere event, broadcast free to the public on the Carriageworks Facebook page, proved to be an amazing digital achievement by all concerned with immensely high production and audio qualities.

These four mini-operas, each under 30 minutes in length, were two years in the making. A collaboration with Sydney Conservatorium as part of their Composing Women Program, and engaging two young female directors, Danielle Maas and Clemence Williams, Breaking Glass purports to address gender inequalities and tell women’s stories. While only two of the works appear to touch on what might be called ‘female issues’, nevertheless, it was refreshing to enjoy the work of both female composers and directors.

Georgia’ Scott’s Her Dark Marauder opened the proceedings with an atmospheric set of swirling sea-mists in which are positioned three rocks, where three protagonists ‒ representing facets of the one persona ‒ are seated, each clutching a typewriter. The artist is literally and metaphorically only just keeping her head above water. It is an arresting image that helps to portray the struggles of poet, Sylvia Plath, and her continuing battles with depression. The singers pour out their emotions about creativity versus sanity in some exquisite lyrical phrases, the music ricocheting into sections of a discordant musical score. Elements of spoken text, helping to elucidate the inner thoughts of the poet, became quite irritating and did not help advance the piece as a whole. Ultimately, little happens in the work dramatically and without resolution. Her Dark Marauder offers some excellent musical moments with a poetic language full of angst, though it lacks elements that can be descibed as opera.

Commute by Peggy Polias however was much more interesting holistically, both dramatically and musically. Taking a strong female story that combined the ubiquitous daily walk home from work along city streets, while introducing an element of menace and fear through the clever juxtapositioning of Greek mythology, Polias had meaty material to work with. The female heroine, exceptionally well played and sung by Jessica O’Donoghue, seems determined from the outset to run the gauntlet of shadowy, dark male figures pursuing her, with Ulysees’ nightmare characters, such as the Cyclops, Scylla and dog, Charybdis, also in pursuit.

The music is at once accessible, exciting and full of colour and movement. From the electronic street scape of rush hour traffic through jaunty jazzy rhythms and a threatening, dark percussive growl, to the final haunting song as Homer’s ‘rosy-fingered dawn’ appears, Polias shows a confident and powerful musical strength.  Visually this was stunning, impressively executed by director, Clemence Williams, and her creative team of set and costume, lighting and AV designers, Charles Davis, Alexander Berlage and David Bergman. A projected video backcloth lit up vivid kinetic images of the city, as our heroine made her way in slow motion across the stage, clutching her handbag against an unknown enemy. Huge projected hand and finger images seemed to enfold her, transforming into a huge and almost Orwellian-styled eye and iris, beautifully mirrored in the polished floor below to complete a watching circle. The nightmare eventually gives way to a white and pink sky for the new dawn and was a more than satisfying conclusion.

Josephine Macken’s The Tent, based on a Margaret Atwood story, unfortunately tried to explore too many ideas at once in a dystopian science-fiction future where mass extinction has destroyed the natural world. A concept that could work well cinematically, three scientists are trying to collate the last remnants of a dying world using some vast super-human computer. Visually, the production values were impressively high with a backdrop representing electronic images of a pixelated computer screen, changing shape and colour at an electrifying speed. Musically, the powerful percussive and electronic soundscape throbs and reverberates as the scientists’ work, with its own cohesiveness and pulsating rhythms that is certainly colourful. But the dreamlike, almost wordless vocal score and animal-like noises rendered this work more an installation than an opera, and it lacked dramatic intensity.

Bree Van Reyk’s The Invisible Bird, exploring the rediscovery of the Night Parrot, was exactly the work we needed at this moment in time. Williams, as director, cleverly dressed the Birds (singers Jane Sheldon, Jessica O’Donoghue and Mitchell Riley) in (penguin) evening dress, setting the piece in a Broadway musical genre that really worked alongside van Reyk’s witty score.  Musically set in palindromic form, the singers list the names of birds who have become extinct while emulating bird mannerisms and gestures to great effect, including some fun choreographic moments. A mixture of percussive bird cacophony, woodwind and piano jazz themes with some powerful lyricism in the parrot’s ‘extinction aria’, beautifully rendered by Jane Sheldon in her feathered-jacket, brought dramatically to life this wonderful score.

The small ensemble of conductor, Jack Symonds, on piano with just five musicians did an extraordinary job with four distinctly different styles of music, alongside the high production and design elements from the creative team and exemplary direction by Clemence Williams.