It’s the most wonderful time of the year!
Dr Diana Carroll 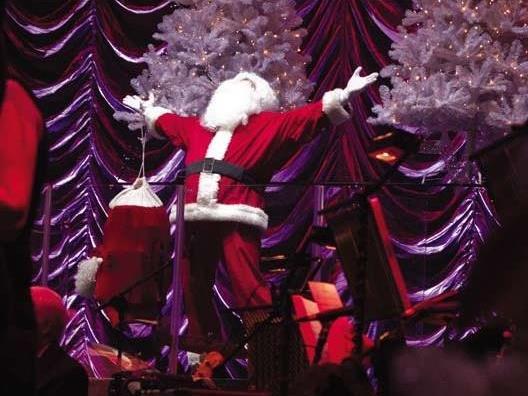 What’s not to love about a Christmas Proms concert with music and dancing and all the trimmings? This year’s Proms featured many of the most popular Christmas songs and hymns played in fine form by the Adelaide Symphony Orchestra.

The greats were there, with Bizet, Tchaikovsky and Strauss all featured on the program, along with some popular musical theatre and swing tunes. From ‘Baby it’s Cold Outside’ to ‘I’ll be Home for Christmas’ and ‘Hark the Herald Angels Sing’ this was an appropriate blend of traditional and classical Christmas music. Conductor Guy Noble made a charming host, chatting amiably with the audience as he introduced the guest performers. He really made it feel like an evening among friends.

The harp solo at the opening of Tchaikovsky’s ‘Waltz of the Flowers’, was played delightfully by Suzanne Handel. And percussionist Steven Peterka even took a moment to demonstrate the importance of sleigh bells in Christmas music!

The ASO was joined on stage by the very popular musical theatre star Lucy Durack whose clear voice shone in these much-loved Christmas songs. She was especially strong in the more jazzy numbers. Tap Pack members Jan DiPetro and Sean Mulligan added a touch of old Hollywood with their dance routines. Their rendition of ‘Me and My Shadow’, in the style of Robbie Williams’ ‘Swing’  concert, was a real highlight.

Rising ballet star, ten-year-old Mietta Brookman added a delightful touch with her special ‘Night before Christmas’ dance. As the daughter of Torben and Richelle Brookman, and granddaughter of Rob Brookman, Mietta has the stage in her DNA, and she clearly has the talent to go far.

It was also lovely to see six young classical ballet dancers from the Barbara Jayne Ballet School on stage in beautiful blue and white tutus. Miss Barbie should be very proud of their disciplined dancing and professional stage presence.

The audience was encouraged to sing along to most numbers, with the words helpfully displayed on surtitles above the stage. A few audience members got a little more than they expected when they were corralled onto the stage for a hilarious working of ‘The Twelve Days of Christmas‘.

The Christmas Proms concert was directed and choreographed with flair by Durack’s husband, Christopher Horsey, and enhanced by a creatively festive design by Kathryn Sproul.