Remaking the World by Julie Rrap

Remaking the World challenges inscribed gender roles in celebration of human imagination and artistic output.
Sarah Grieve
[This is archived content and may not display in the originally intended format.] 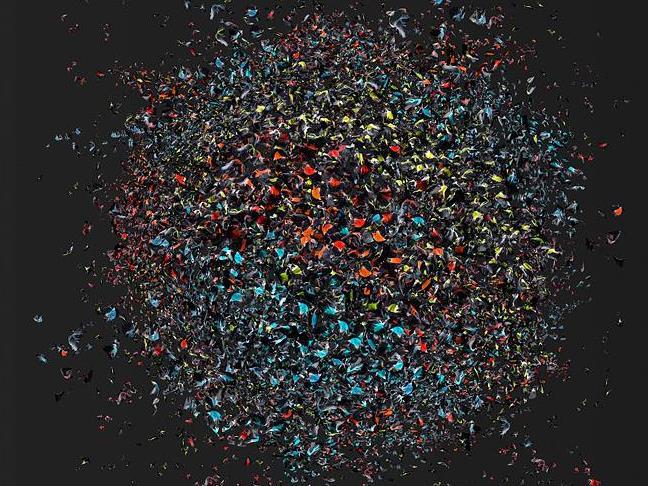 As the viewer ascends the stairs of Roslyn Oxley9 Gallery a sleeping figure is revealed, then another, next to another, until there are 10 sleeping subjects peacefully cosied together on the gallery’s landing. ’Remaking the world: Artists Dreaming’ is the first of two ‘environments’ that comprise Julie Rrap’s exhibition, collectively titled Remaking the World.

‘Artists Dreaming’ (2015) consists of 10 panels in a linear display that each represents a different slumbering subject; all upside down, hanging like bats. It is not immediately evident that each panel represents a moving image, until a stretch, a breath, or unconscious repositioning alerts the viewer to the subjects’ animate state. A total of 30 different subjects occupy the video panels at various intervals. Each subject is an Australian artist, they are Rrap’s friends and peers.

Over the course of her 30 year career Rrap’s work has challenged history’s hierarchical and binary constraints from a feminist perspective. In this exhibition, her 12th at Roslyn Oxley9 Gallery, she prescribes herself the task of ‘Remaking the World’. In ‘Artists Dreaming’ Rrap suggests that each of the artists’ represented are remaking the world in their own unique way, and she invites the viewer to enter the artists’ dream space – where artistic ideas are often conceived.

The concept of accessing the dreams of artists is a Surrealist notion. However the role of women in Surrealism was confined to that of the muse: to access the world of dreams for male artists, but not to indulge in any dreams of her own. In Rrap’s remaking of this idea, the artists, regardless of their gender or background, are equally vulnerable in their suspended state of consciousness. They are a tribe, unified by their identical white linen cocoons; but although they appear physically similar in recumbence and habitat, each artists’ mind is unique, and impenetrable. The artists’ dreams are safeguarded, the viewer can only speculate.

In contrast to the quiet intimacy of ‘Artists Sleeping’, the second environment is visibly intense. Rrap uses video installation, sculpture and photography to explore the dual states through which art comes to exist. The room is dimly lit, like a cave: an ironic prehistoric setting for her futuristic re-imaginings. The space is filled with RGB colours, metallic tones and unnatural movement, the mood is cool and digital. This body of work is titled Remaking the World: In her image, and suggests a subversion of the myth of creation.

Reoccurring throughout this series is a motif of a female figure in various anamorphic poses. The image is born of Rrap’s video installation, ‘Uplift’ (2015). In this video we see the artist contorting in perpetual fluid motion as she casts a large piece of fabric into space. The fabric itself depicts alternative images of the artist. On one side is her naked body, and on the other she is wearing a Marilyn Monroe-style dress. Both sides of the cloth represent past incarnations of Rrap’s work, for which she has become well-known. The artist and her work appear to be dancing together in harmony at one moment, wrestling the next. It is hypnotic struggle for balance, and the viewer cannot ascertain whether the artist is in control of her work or whether the work is controlling her.

Various static images of the artist interlaced with her textile appendage have been reproduced to create several other artworks in the exhibition, and is best resolved in ‘Remaking the World #4’ (2015). From a distance this artwork appears altogether abstract: a shimmering orb of primary colours and negative space. On closer inspection the viewer becomes aware of the hundreds of figures twisting and turning. The perceived movement generates energy that seems to gain momentum as it swirls around the spherical form. It is like a self-sufficient organism, a planet – a new world.

The elliptical form can found in several other artworks within the space: it is the void created by lips blowing, it is the ring of sculptures, it is the shape of the eyes of the all-seeing beast. The circle is a symbol of female sexuality and one that Rrap has sporadically integrated into her work throughout her career. Perhaps this subtle layer of meaning was inserted by Rrap’s recurring character of the trickster, intended to fracture history’s male-dominated edifices.

Allowing the viewer space to create meaning is characteristic of Rap’s conceptual practice. It is not obvious, nor didactic. Remaking the World challenges inscribed gender roles in celebration of human imagination and artistic output, and the viewer is encouraged to participate in remaking the world, rather than to exist as a passive observer.

Sarah Grieve has broad experience in the arts sector, including several years managing a commercial gallery in Sydney. She has curated cultural events as part of Sydney Festival and co-founded the online book store Gang Atelier. Sarah is currently studying a Master of Art Curating degree at the University of Sydney and was recently selected in the Art Gallery of New South Wales 2015 student speak program.