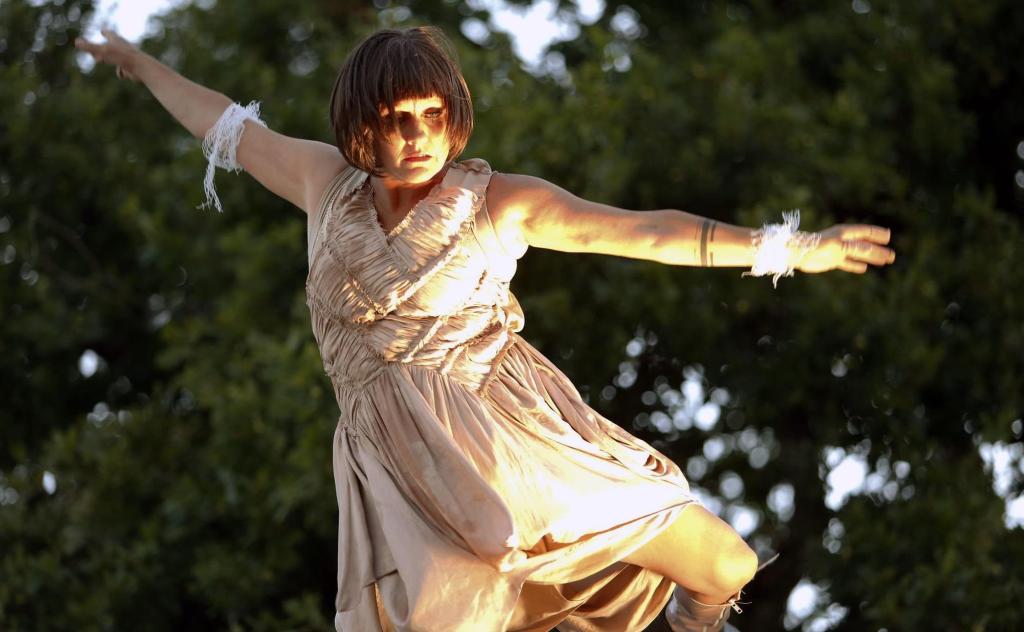 All three of these works were presented as part of MONA FOMA 2021. While Zinc and After Erika Eiffel were also part of the first week’s program in Launceston, Let Me Dry Your Eyes was only seen in Hobart.

In partnership with Tasdance and Launceston’s Situate, Hobart artist Loren Kronemyer’s After Erika Eiffel puts the audience right in the centre of the action. The formalities begin as soon as each audience member arrives. Cars are lined up, chairs lined up, and a short silent queue waits to be assigned responsibility. In the distance, across acres of slashed grass, formal structures are positioned for maximum viewpoint and guarded access. The hush is only broken by birds. Four serene humans, The Angels, emerge with exotic quivers hung just so. Their gaze scans the field as they parade; weapons slung, but at the ready; watching and silently shadowing our journey.

The preparations continue. Kronemyer paces towards us, sizes us up and selects our lethal weapon, and partner, for the next hour. With an increasingly horsey gait, she trains us to meet her expectations; the turn of the torso, a tilt of the chin; the caress of hand along cheek as our aim hovers over our target. Sensitised and alert, we are slowly given our liberty to release our single arrow and move forward.

Clearly separated in a staggered line, we now make our own way through the course addressing each target. In turn, each meets us with a piece of broad wisdom, personal reflection or hint of sensuality. This work draws you in, demanding strength or pushing you to frustration. Either way, you have to take on the lessons and commit to complete the cycle.

Located at the old Beaumaris Zoo, Let Me Dry Your Eyes, by Hobart’s Second Echo Ensemble (SEE) is another work which requires a bit of audience ambling. Again, as we wait, the performance draws us in. Slowly and very gracefully, Paul Roberts makes his way down the slope to the gate, his peacock-like progress emphasising that we are actually on the wrong side of the bars of the old site where the last thylacine paced its days.

This outdoor presentation is the culmination of a long exploration (over several years) of the opposites, similarities, connections and disconnections of two very different species – a bird and a whale. Initially the ideas of Alma Faludi and David Montgomery, Second Echo Ensemble has pushed this work into a site-specific encounter with these contrasting species and the humans occupying the world between.

On entering the zoo, we meet a fisherman occupied doing what fishermen, in the old sea shanties, do. All around the empty duckpond, recycled plastic forms sprout from the ground. We are then introduced to the two key characters. The Bird, Eri Konishi, tantilises with a very distant view (through cardboard binoculars, if you choose) of a fluffy tufty creature on the top of an old weathered zoo enclosure. As she flits and flirts, she is at constant risk of capture by creatures unseen wielding hoops.

In the other direction, David Montgomery is the focus as the whale, accompanied by Michael Fortescue’s manipulations of sound, echoing his watery existence. Hand tapping, fin gliding and body slapping emphasise the key movement ideas, while the subsequent evocative film (by Nick Green) highlights the sheer freedom of moving a body through liquid.

Returning to the pond, we witness the distant meeting of the two worlds of the bird and the whale. Forever separated by levels and surfaces, the improvised movements of each are as free as they can be, becoming more similar than distinct. Here the props and the site take on their other role as the audience is encouraged to accompany the proceedings, although it seems that the mutual fascination of each species is destined to be merely a dream. At Beaumaris, director Kelly Drumond Cawthon, has found a space where each of the performers can show their strengths in telling this delicate and simple tale.

Zinc in contrast is a bold work pinpointing a particular metal and the processes of its production. BIG hART, from North West Tasmania, like Second Echo, are working with artists with diverse abilities and like the images, which make up much of the accompanying films, there is a sense of fluidity in the performance.

Zinc is an installation that can also be experienced as a live performance. Set in a darkened box-like room, deep in the bowels of the Nyrstar Zinc Works in Lutana, the corporate white blinds have been taken over as the recipients of huge blocks of digital imagery. Mostly black and white, the footage includes gas and metal, circles and squares, cubes and grooves and the ever-present theme of solid and liquid.

It seems the musicians have a lot of digital equipment hidden in the corners of the room, from where, in turn, each ‘track’ emerges. Found sounds from the factory’s machinery and production lines dominate their manipulations at times. At other moments a lighter mood is created in the centre of the space with contact mics buried in a stack of zinc bars. Conventional instruments easily cohabit with ball bearings in this space. The effect is hypnotic.

It is impossible to focus on just film or sound as they intertwine. Scratching and graffiti wobble and vibrate on the screen and somewhere in the brain. Some images are easier to decipher and some playfully melt away just as you think you make a connection. The deep purr of the bass is a momentary bath of sound, then our focus shifts to another screen. A kaleidoscope of colourful drawings twinkle to the voices of factory workers. Their presence of their efforts strong despite their absence.

Drawing together several different visual and audio media, BIG hART have reflected the complexity of the site and the processes that people make happen inside it. Zinc is a fabulous tribute to things that humans can make.