Music Review: No Friend But The Mountains: a Symphonic Song Cycle

After winning an army of literary awards, No Friend but the Mountains, the extraordinary book by Kurdish-Iranian prisoner Behrouz Boochani, has become the inspiration for an operatic work.
Liza Dezfouli 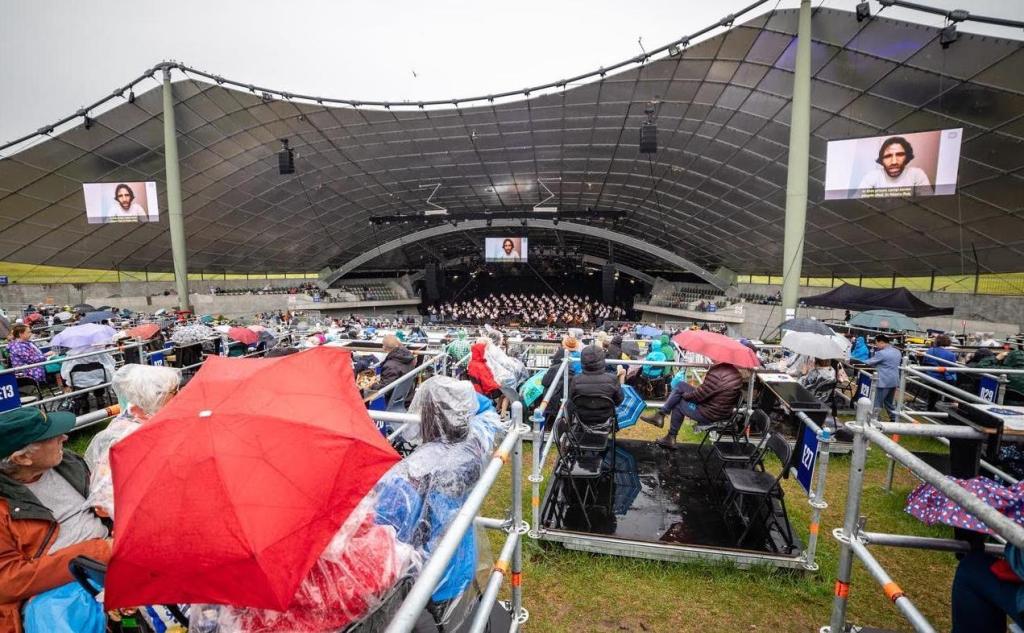 During his seven years incarcerated as a political prisoner on Manus Island, Behrouz Boochani sent a series of text messages in secret which formed an entire book, in one take, as it were. He also made a documentary film, released in 2017 in much the same way.

No Friend but the Mountains: A Symphonic Song Cycle owes its beginnings to the performance’s soloist, bass baritone Adrian Tamburini, who first thought of setting the more poetical passages of Boochani’s text to music; a couple of years ago he suggested this to Australian composer Luke Styles, who went ahead and did just that.

The world premiere of No Friend but the Mountains: A Symphonic Song Cycle, jointly presented by the Zelman Memorial Symphony Orchestra, the Arts Centre, and the Wheeler Centre, was held at the Sidney Myer Music Bowl, sung by Tamburini with the Zelman Orchestra and the Melbourne Bach Choir, and conducted by Rick Prakhoff.

Composer Luke Styles is currently in the UK, where he is based, so he wasn’t present for the premiere. Shamefully, Behrouz Boochani is still not permitted to enter Australia, so the event was live-streamed to him in Christchurch, New Zealand, where he now lives.

‘Boochani, a singer himself, talked about how important art, music in particular, is to protest and resistance.’

The event was hosted by ABC radio host and journalist Rafael Epstein, and included a recent, pre-recorded interview he did with Boochani in New Zealand. Boochani emphasised that No Friend but the Mountains is only one of many things he’s done; his body of work is not defined by this book. His hope, however, is that it will create a space for others in similar circumstances to use their voices. Boochani and his translator Omid Tofighian expected the book to have an eventual impact, in about ten years’ time, say. Neither anticipated its incendiary ascension into public acknowledgement and literary acclaim. Boochani, a singer himself, talked about how important art, music in particular, is to protest and resistance.

The No Friend but the Mountains: A Symphonic Song Cycle is a relatively short work employing a big production, with a choir and large orchestra. The narrative follows Boochani’s story, but the ­­song cycle is designed to also tell a greater story, to reference elements of Australian history where so many have arrived by boat, and so can be experienced as an historical Everyman’s Tale.

Read: Music Review: Vera Blue with the MSO: Everything is Wonderful

The music in the early parts about the sea journey utilises percussive elements, creating the sounds of South Sea musical instruments to create the rhythm of waves, in opposition to the more familiar orchestral swelling arrangement of strings; moments of these latter phrases are briefly reminiscent of some of the bigger bits of Khachaturian’s Adagio from Spartacus. There is occasionally a disjointed feel to it all as the voice and the choir interrupt the music. The contribution of the choir is fragmented: truncated observations adding texture and contextualisation. Moments of silence punctuate the music.

In his writing, Boochani makes great rhythmic use of lists and of repetition, often beginning new lines with the first few words of the last; this is especially powerful in song, with the simple phrases here given such intensity by Tamburini. The song cycle does justice to Boochani’s poetry, recreating the descriptions of scenic beauty of the island along with the tension, anguish and desperation of the lives of refugees trapped there, with the experience of prison expressed by deep string sounds along with, in particular, a dominant bass clarinet and tuba.

‘The song cycle does justice to Boochani’s poetry…’

References to birdsong, especially that of the chauka bird which becomes a character of its own in the narrative, were made especially enjoyable by the chorus of actual birds in the environment around The Bowl – they were loud and insistent throughout, and it was easy to imagine they were responding to the music.

The ending is a dramatic utterance of the words ‘human being’ – Tamburini finished on a powerful and deeply emotional note which left the audience stunned.