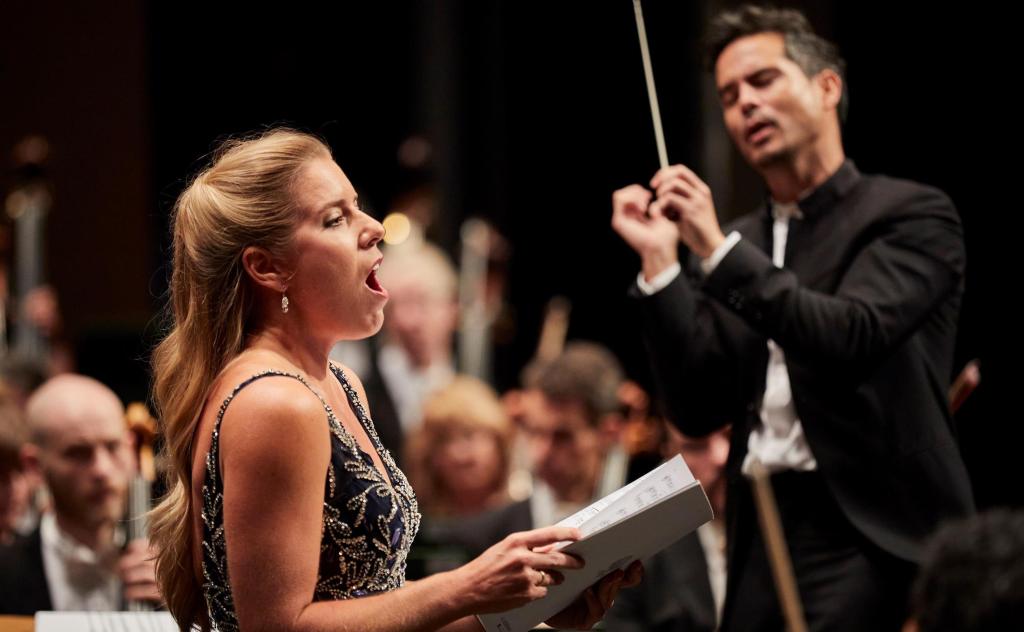 The Adelaide Symphony Orchestra (ASO) opened its 2021 season with two important initiatives: a musical Welcome to Country and a spotlight on female composers.

Introducing the concert, ASO managing director Vincent Ciccarello, said the orchestral Kaurna Acknowledgment of Country, Pudnanthi Padninthi (‘The Coming and the Going’), was composed by two proud Kaurna Narungga men, Jack Buckskin and Jamie Goldsmith, in association with musician and composer Mark Simeon Ferguson. Opening with the evocative sounds of the clapsticks, the piece has echoes of the traditional ceremonial Welcome but with a musical twist. This piece, in various forms, will now be played at every ASO concert.

This year, the ASO has undertaken to feature works by female composers. Ciccarello says female composers have been unfairly overlooked for some 200 years and so one will be featured in every program this year. He also welcomed Wilma Smith as Guest Concertmaster for this performance, in the place of Natsuko Yoshimoto who retired from the ASO at the end of last season.

‘ASO opened its 2021 season with two important initiatives: a musical Welcome to Country and a spotlight on female composers.’

This concert featured Big Rhap, a piece by contemporary Australian composer Elena Kats-Chernin that premiered in 2017. Kats-Chernin says the piece was inspired by her childhood memories of hearing Liszt’s Second Hungarian Rhapsody played by her mother. Big Rhap opens boldly, with big sounds from the brass and resounding timpani, but it’s not all drama. There are also moments of quiet reflection and some lovely  work from the harp and clarinet. Close your eyes for a moment, and Big Rhap sounds like a classic period film score.

Reflections are also at the heart of Samuel Barber’s work Knoxville: Summer of 1915, written in 1947 and revised in 1949, for James Agee’s prose poem of the same name. Sydney-born soprano Lauren Fagan joined the ASO on stage for her first professional appearance in Australia. Fagan has been based in London where she studied in the Covent Garden’s prestigious Jette Parker Young Artist Program. Her warm, smooth voice and engaging stage presence made her a delight to watch although her words did sometimes get a little overwhelmed by the full weight of the orchestra. Fagan was replacing Siobahn Stagg who had been billed for the performance but was unable to travel from Berlin.

And then the highlight piece, a full 45-minutes of Tchaikovsky’s much-loved  Symphony No.4 in F Minor. After a slightly shaky start, no doubt simply reflecting the dearth of concerts over the past 12months, the ASO gave a fulsome rendition of this work that is said to express in music the idea of fate. And how fitting given the events of 2020 and the uncertainty still of 2021. Opening with exuberance, the Symphony changes mood with each movement, reflective and resonant, before returning for an impassioned finale. For me, the real beauty lies in its quiet passages and these were handled with sensitivity by the orchestra. There were no hesitations at the end, finishing with impressive precision.

‘For me, the real beauty lies in its quiet passages and these were handled with sensitivity by the orchestra.’

Conductor Dane Lam was poised and confident, keeping the ASO en pointe throughout this varied program, and almost leaping from his podium in the final bars of the Symphony.

The required chequerboard seating meant the audience was reduced to around half its usual capacity but that didn’t dampen their enthusiasm.  ASO – it’s so good to have you back on the big stage!