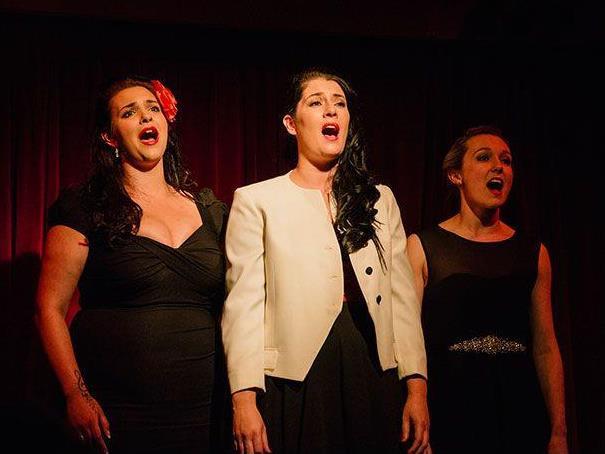 A show that boasts a versatile range of genres as much as is does a versatile range of performers, Les Femmes is a mixed bag of comedy, soul, tap, jazz, gospel and even rap. Hollywood cabaret veteran Chris Wallace is the guiding presence of the evening, opening and closing the show, yet the true essence of the evening comes from the female trio: veteran cabaret singer Sarah-Louise Younger, national recording artist Georgina Ward and rising star Bonnie Page.

The three women wear black, with touches of red and each outfit style is very different to the next; one formal, one casual and one strange and wacky. While this stylistic decision may be chosen to reflect each performer’s character, it comes off as slightly messy and underdone.

Accompanied by piano and cello, original songs written by Wallace are stylistically old-fashioned and generally well received. The performance of the night is the gospel anthem ‘Deeper’, performed by Younger. Backed by the rest of the ensemble, this song perfectly displays Younger’s soaring range and insane levels of rich vocal tone and volume. However, apart from ‘Deeper’, several of the songs bleed into the others and are forgettable.

A problem often encountered by Younger is at times her voice is too big for the venue and drowns out the other performer’s vocals, instead of adapting to the harmony. Charm, professionalism and contagious energy is exuded from Page, a performer that might lack the volume of Younger but makes up for it with her operatic falsetto, tap dancing and scene stealing charisma. Unfortunately, out of the three lead vocalists Ward is the least memorable. While her singing abilities are generally impeccable, she is lacking the vocal wow-factor of Younger and the liveliness of Page.

The song entitled ‘I love chocolate’ is perhaps less than original, irritating in melody and lyrics, as well as guilty of reinforcing an overdone cliché regarding women. ‘I love chocolate’ along with ‘Ping Pong’ sticks out for all the wrong reasons. Both songs are childlike, amateurish and contradict the mature tone of the evening.

For a cabaret entitled Les Femmes – ostensibly a show dedicated to femininity – a fare chunk of proceedings is either driven by a man (Wallace) or is focused towards men. For example, the second solo of the night by Ward is essentially a song dedicated to how finding a man to marry would make a woman’s life complete.

The opening monologue about Wallace’s admiration of women is almost boastful on the edge of patronising and in a way exoticises the female form. Perhaps preconceptions of what Les Femmes be might effects the view of it as the title seems to promise a different cabaret show to what is realised.

While the nostalgic feel of the night is no doubt in reference to the Chicago cabaret shows from days of yore, it still feels too outdated and out of touch with the les femmes of today.