Measure for Measure is a gripping production that will have you on the edge of your seat.
Lynne Lancaster
[This is archived content and may not display in the originally intended format.] 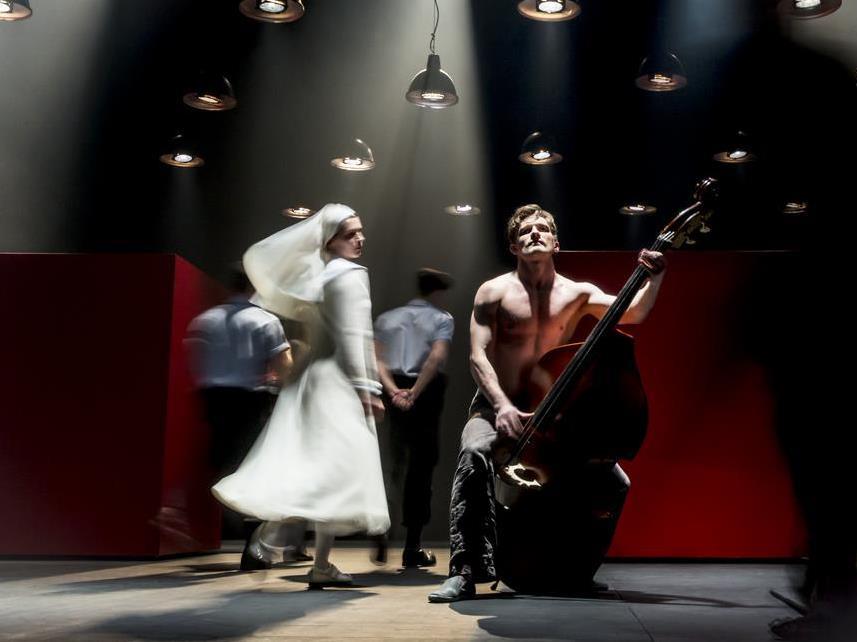 Measure for Measure is a gripping, stylised production that will have you on the edge of your seat. Measure by Measure is performed in Russian with English surtitles and is a most exciting collaboration between Cheek by Jowl and Pushkin Theatre Moscow.  A somewhat abridged version  –  staged in contemporary dress  –  creating the themes  around  power, politics and corruption (and the suggested sacrifice of Isabella’s purity) as fresh as if it was written yesterday. Questions are asked about the relationship between ordinary citizens and those in power (the allusions to and parallels with the current Putin era are subtly indicated).

The staging was clean and simple with the most effective and at times startling use of five red revolving cubes, a desk and a few chairs. Vienna becomes a modern day Everycity. Overhead lights were utalised nicely and the fluid scene changes allowed the text to be played out in abstract vivid settings in a bare, pulsating and dynamic staging.

The Duke, in a whirlwind of crisis, hands over power to his seemingly incorruptible deputy Angelo and takes on the guise of a friar, the better to observe the crackdown on vice his departure will permit. He discovers that things are worse than what he had thought. Director Donnellan cuts directly to the play’s sense of a governmental experiment gone awfully wrong. What will happen when Angelo can indulge his instincts for authoritarian repression? Power corrupts and he succumbs to the licentiousness he’s attempting to purge: if the innocent would be nun Isabella wants to save the life of her brother Claudio, she must agree to Angelo’s sexual demands, risking her soul. She refuses. A trick spares her (and Claudio) and all is sorted eventually but the damage has been done.

Isabella as portrayed by Anna Khaliluina is excessively virtuous yet she can be extremely passionate and headstrong (especially the moment when she pleads for her brother Claudio’s life) . She radiates piety and innocence yet is feisty and determined.

The troubled Duke, while concerned for his people undergoes a spiritual crisis of his own at the start of the play, was terrifically played by young, darkly handsome Alexander Arsentyev. At the end of the play we find he has successfully manipulated and controlled events towards a happy conclusion – or has he?

It might be a love match for the Duke but not for Isabella who at first almost completely ignores his passionate proposals. It is only right at the very end that Isabella grudgingly allows the Duke to touch her and they and the other two main couples (Angelo and Marian and Claudio and Juliet) romantically waltz to the accordion music as the curtain descends.

The ultra cool, suave, slithery and hypocritical villain Angelo (Andrei Kuzichev) appears to be beyond reproach but he is serpent like, with hidden desires. He is instantly attracted to Isabella, sniffing his hand where she kissed it, sniffing her feet and smelling and stroking the chair where she sat. There is enormous tension in the scene where Isabella comes to plead for Claudio’s life and Angelo almost rapes her.

Alexander Feklistov has much fun in the role of Lucio. Claudio was excellently portrayed by handsome Kiryl Dytseevich (much is made at one point towards the end of his use of a cello).

This startling, gripping and disturbing production is set in an Everycity that might well be Putin’s Russia, but also allegorically stands for any other country where authority is misused. Go see.

Shakespeare’s Measure for Measure
The Cheek by Jowl/Pushkin Theatre