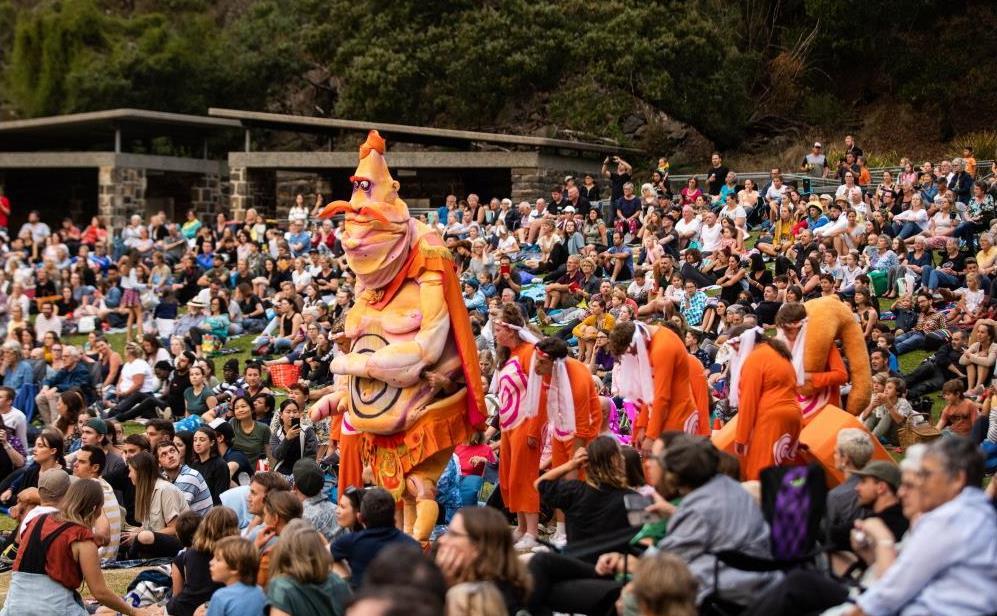 Mona Foma, Mona’s annual summer festival curated by Brian Ritchie, in collaboration with Terrapin Puppet Theatre, has scored a major hit in King Ubu: a grand and spirited affair, and a cause for celebration.

Alfred Jarry’s pataphysical spitball was a breakthrough work when it premiered in Paris in the 1890s, and has since been tackled by everyone from Peter Brook to Spike Milligan. But it presents challenges. It’s a historical point of reference whose real value is in the influence it has exerted, on Artaud and Ionesco for instance, rather than in being of itself a coherent work of stagecraft. It’s like the Rosetta Stone: invaluable as a key to unlock the otherwise mysterious, but of only marginal interest in itself.

Musically, the show successfully captures the innate anarchy of Jarry’s original. Brian Ritchie’s musical schema has a schoolboy’s irreverence. It embraces the riotous, surprising, jokey and cunning, and self-parody. But in this family-friendly version, the text is often prosaic, the satire more cheeky than caustic. However, adaptor Willow Weiland’s text comes vividly alive in her song lyrics, and a contemporary voice resounds richly in these smart, pithy lines.

Of course, the text and music are but the carpet on which to display the opulent furnishings of this royal entertainment. A free event, staged outdoors in Launceston’s Cataract Gorge before a nightly audience some 2,000 strong, King Ubu incorporates a live band, a troupe of actors and three ensembles of community participants, outsized puppets, bridges, a swimming pool and the world’s longest single-span chairlift (!) amid a wild landscape of hills and woods. All play their part in this panoramic spectacle.

Giant puppets embody stupid, vain Pa Ubu and his splenetic consort. They’re big and orange and vulgar in every sense of that word; Trump and Hanson are the presiding if unnamed divinities of this fiendish rite.

The staging sits handsomely in its environment, and Sabio Evans’s vibrant costumes are fun, attractive and very effective in this vast space.

But the real star of the evening is director Sam Routledge. He marshals his vast resources with discretion, taste and thoroughness. From the many young community participants, he draws highly creditable performances: focussed, confident, mature. He makes brave and successful use of the possibilities of the site, and creates something popular and artful, carnivalesque yet controlled, dynamic and memorable. It’s a commanding piece of show-making.