In Cahoots: Artists collaborate across Country

In Cahoots is about six Aboriginal art centres and selected artists working together in unexpected ways to challenge the nature of creative collaboration.
Glennys Marsdon
[This is archived content and may not display in the originally intended format.] 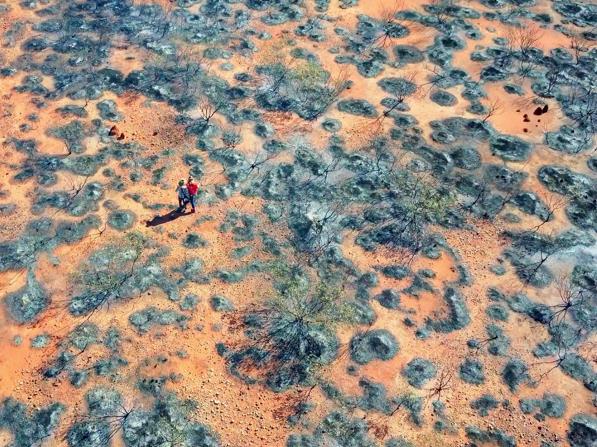 Eighteen months ago, leading independent artists (both Aboriginal and non-Aboriginal) began an ambitious plan to hold residencies in remote and regional Aboriginal art centres across Australia. Over one hundred artists took part from the Western Desert to Arnhem land and the Mornington Peninsula.

The collaborations birthed In Cahoots: Artists collaborate across Country, now showing at the Fremantle Arts Centre. The diversity of topics, techniques and objects used to showcase community and individual stories is extraordinary. In Cahoots is an atmospheric, inspiring exploration of what can be achieved when cultures collaborate.

If I’m honest, I entered the exhibition feeling a little disrespectful. Although my eyes had been opened a little thanks to the When the Sky Fell: Legacies of the 1967 Referendum exhibition (PICA, July-August 2017). I still have a lot to learn about Aboriginal art. But then I realised that was the point.

Artists from diverse backgrounds were challenged to create pieces from found objects within their area. In doing so they shared techniques, stories and learnt from each other. The independent artists conducting the residencies visited the communities on a minimum of two occasions. This meant they gained a deeper understanding of the artist’s lives, rather than being dropped in for a one-hour workshop.

In making their journeys the visiting artists braved washed out roads, flat tyres and extreme weather to learn and share cultures. The least I could do was devote an afternoon to perusing this expansive exhibition.

My favourite space was the darkened exhibition by Baluk Arts from the Mornington Peninsula. Each piece on show hovered off the ground thanks to a counter-balanced system using stones. The effect was ethereal. Stunning pieces made from kelp, clay, rubber, wood, cuttlefish and feathers hovered in the darkness. I was particularly drawn to two pieces.

Gillian Garvie’s piece Waa has my heart, depicts a crow as the nurturing protector of her heart. It was the first piece to catch my eye and one I continued to think about well after the exhibition; simple and powerful.

Finding Place by Lisa Waup portrays her place at the centre of the family. The detail had me lingering for longer than I should. Dominic Bramall-White’s North East Vessel and Kirsty Bell’s ME also deserve a mention.

There was something so special about the atmosphere in this space. Even after seeing all the other pieces in the exhibition I returned, just so I could take the feeling away with me.

My second favourite area was Blood Portrait, the confronting work from Arnhem Land by Ishmael Marika and Curtis Taylor. At first I marveled at the straightness of the red lines that drew my eye downward to the darker red pooling on the skirting board. How steady his hand must have been, I thought.

The unwavering straightness of the lines was only amplified when I found out that no instruments had been used. The fine line ‘paint’ effect was the combination of real blood and gravity. Taylor had drawn on ceremonial activities to literally put himself into his art, a wall dripping with his own blood. I’d never seen anything like this and doubt I ever will again. It was strangely mesmerising.

Also in this room was a sculptural work containing 100 spears, made by five different spear makers, all coming to a central point. I wasn’t surprised to hear that this was the most difficult piece to hang.

On my way to another room two artists told me about their piece at the end of the corridor called ‘the big hairy chair’. Created by a group of artists from Fitzroy Crossing and the Wollongong region, The Jangarra Armchair took pride of place at the back of the room.

Made of wooden coolamons and human hair the chair represented the story of a hairy ‘’man killer’. Children would be told the story of a man who emerges from behind large ant hills, a neat way to keep them away from dangerous situations.

Also in this room was Collision, a stunning collection of a bench, armchair and vessel. Made from rusted car panels the interesting shapes were the direct result of a collision. Artist Johnny Nargoodah added soaked leather to covert the twisted metal into a chair. The saddle inspired seat wouldn’t look out of place in a London museum. A place to sit and ponder over a Master perhaps, although it would be a shame to sit on it.

Car bodies were a recurring theme across several spaces. Martumili Artists from the Pilbara combined car doors with weaving to create almost alien looking figures. They would definitely help keep the dust out of your eyes, though I don’t know how the dog would feel sticking his head through one. Rachel Handley’s large car wheel rim basket was equally gorgeous.

Weaving was also used by Blackstone Papulankutja Artists along with painting and mirrors to add ‘sparkle’ to concentric the circles. These pieces provide a moment of reflection as you walk down the corridor.

The main gallery space was reserved for an installation by 45 Warakurna Artists from the Ngaanyatjarra Lands. The wall was an explosion of images from everyday life. A local home was depicted complete with water tank, and the family dog. There were horses, camels, people, patrol cars, helicopters, a church and the no doubt necessary, fan. Also included was a cheeky photographic exhibition highlighting what happens when superheroes go bush.

Congratulations go out to all the artists involved, and to the Fremantle Arts Centre for producing such a stunning, thought provoking exhibition.

Make sure you buy a copy of the program, which includes essays from the artists explaining the collaboration from their viewpoint. One such explanation came from Claire Healy and Sean Cordeiro who said the collaboration initially ‘felt strangely like an arranged marriage. Neither party had meet before but a few attractive photos had been seen.’

If the pieces and stories behind In Cahoots are anything to go by, I predict a happy marriage with many healthy cross-cultural offspring.

In Cahoots: Artists collaborate across Country

Participating art centres and artists include: