Looking back over 30 years of Brisbane's contemporary music, this innovative exhibition has plenty of earworms along with the culture that surrounds the scene.
George Dunford 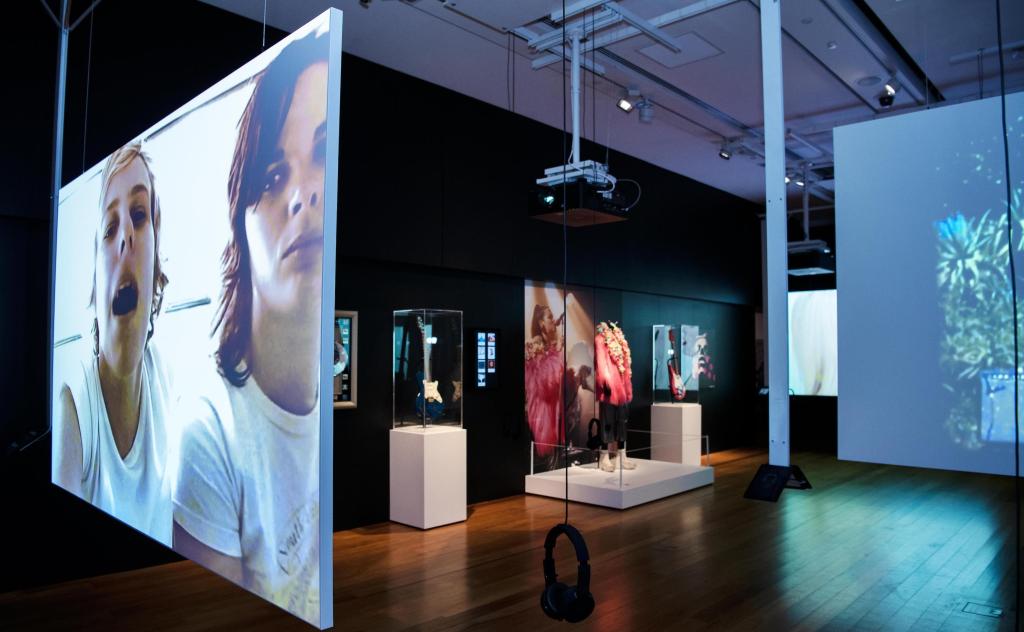 Thirty years ago with the fall of conservative demagogue Joh Bjelke Peterson in 1989 and still on a high from Expo 88, Brisbane was looking for a new culture. High Rotation – a look and listen to the last 30 years of Brisbane’s music scene – turns your ear to this moment and will surprise with the wealth of Brisbane bands.

Entering the exhibition you’re met with several large screens playing videos of the biggest songs of Brisbane’s last 30 years in music – from Kev Carmody and Powderfinger to Mallrat and Shepard. Epic in size and programmable by visitors, the screens solve the problem of how to represent video culture: at a scale they can’t get at home but make it as dexterous as YouTube. Plus the Museum of Brisbane (MoB) adds hard to find gems into the mix like a video by DJ Angus that took 18 months to source and remaster. And there’s a take-home element where you can create your own Spotify playlist of Brisbane classics.

But at the core are objects including the glittering Eurovision outfit for Kate Miller-Heidke and programs from Livid Festival (which also began in 1989) made to look like an old road atlas. From this collection you get the sense that the music venues of Fortitude Valley and other Brisbane dives propelled a new culture forward even for visual artists who created poster art. The music of that period was post punk (there’s a gentle nod to the period before with The Saints and Go Betweens) and shows what can grow out of the shadow of a conservative government.

Essential to Brisbane’s music scene were the live music venues and the 30-year period also coincides with the anniversary of the Riverstage that has hosted the big acts. Many of the smaller bands pushed their way through in Fortitude Valley which has lost venues (vale Festival Hall, the Hi-fi and the Troubadour to name a few) to higher rents and the creep of gentrification but some new spots have appeared.

Into the 2000s music recording technology became easier, and smaller labels flourished which meant that Brisbane musicians could record in their city. The brain drain of talent south to Sydney or overseas slowed as local opportunities appeared. The growth of streaming services meant that loved local record stores survived as vinyl collectors’ outlets. The exhibition charts how the culture became an industry with more than a little nostalgia.

The exhibition wants you to do more than nod along to your favourite tune. There’s interaction including Tributaries, an installation by Luke Daniel Peacock and Jhindu-Pedro Lawrie that lets visitors mix and supplement Brisbane tunes on large spider-like device. It’s a chance to mess with sound levels and drum beats on Thelma Plum’s Better in Blak or Powerfinger’s My Happiness. On the way out there’s a chance to share your fan letter, a recording of a music memory that will be broadcast on ABC Brisbane and keep the story of Brisbane music alive. It makes for an evocative connection of music to the scene that created it.

The writer was a guest of Brisbane Festival and Brisbane Marketing.