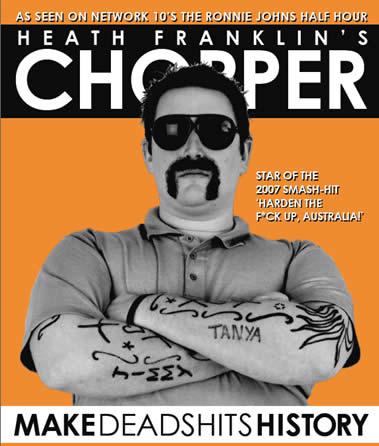 An evening spent at Pentridge D Division with Heath Franklin’s Chopper was ‘f@*n’ brilliant. The show’s title theme ‘Make Deadshit’s History’ was Chop Chop’s version of the ‘Make Poverty History’ campaign. After all, Chopper reckons ‘you can’t eat a f@*n’ song Bono’. This evening was about Chopper raising awareness of ‘deadshits’ and actively arguing his case for their demise.

Chopper first came to life on the Ronnie Johns Half Hour, an Australian sketch comedy show born in 2005. For those of you who don’t know about the real Chopper – Mark (Chopper) Reid is known to have been convicted of crimes including armed robbery, firearm offenses, assault and kidnapping and has spent 13 months outside prison between the ages of 20 and 38. Also known to have cut the lobes off both ears whilst in Pentridge – so he’s no lightweight to be sending up! Evidently the real Chopper has praised Ronnie Johns for his impersonations in a recent TV interview.

Filing into Australia’s ‘Bluestone College’ Pentridge and taking our seat in cramped rows, whilst gazing up 3 levels of the now defunct cell blocks is a fascinating start to an evening out. There was a real seriousness to the attendants concern for no photography, no drinks AT ALL whilst inside the event, and it did set a slightly anxious mood. After a warm up act of the Nelson Twins, Chopper ambled on stage sporting trademark dark sunnies, stubby in hand and a ‘f@*n’ head full of expletives.

Chopper was once allowed a 15 word f…k limit due to TV censorship. Well he far exceeded that and used the word as a noun, adjective and practically every possible way you could work it into or around a phrase. Although nothing is sacred in this show and I mean nothing, you do get a sense that there is a limit and a line Johns won’t cross. In audience participation segments he doesn’t totally slaughter his volunteers, you do cringe every now and then but it’s not mundane humour.

The show moved from one liners through to short Chopper video educationals and ended hilariously with a ‘new script’ he wanted to try out with three audience members as the characters. Breville Bartos, his prostitute girlfriend, and Breville’s girlfriend – the volunteers participated with good humour and it was a fitting end to the evening.

I know some people struggle with ‘adding to the real Chopper’s infamy’ – but if you are a fan of Choppers weather report and love Ronnie Johns warped send up of Chopper Reid you will love this show. It’s playing to sellout crowds around Australia and is worth every cent. But you must like that kind of humour. For a preview of Ronnie John’s Chopper Reid go to youtube and you’ll soon decide if you ‘re a fan.

Leesa Nicholls is a sculptor and Arts Hub reviewer.