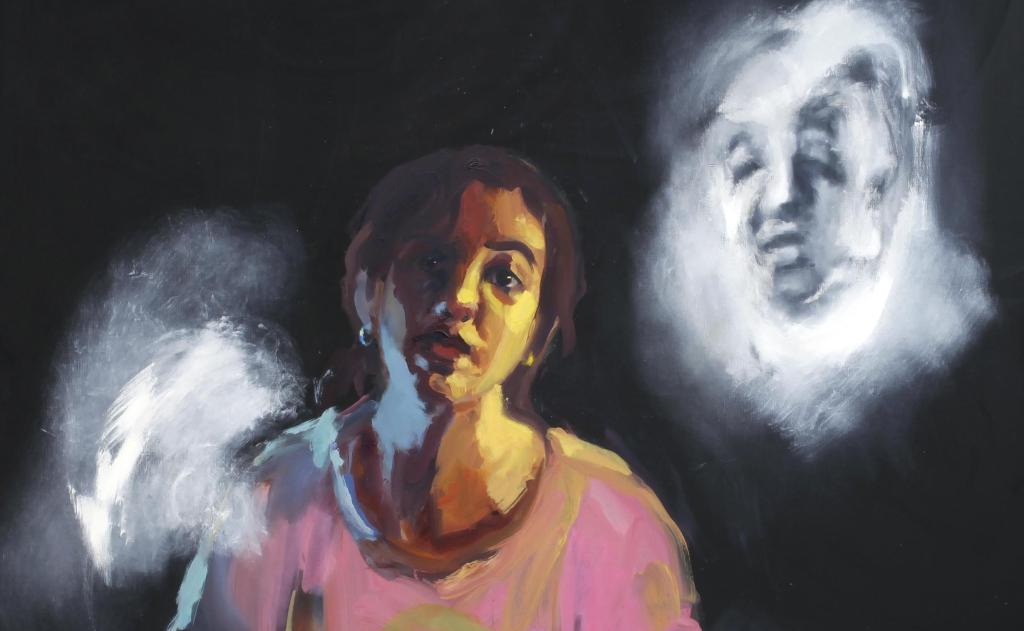 I visited Wendy Sharpe’s exhibition, Ghosts, on a weekday lunchtime and was struck by the irony of the profuseness and vivacity of the work; the very ‘aliveness’ of the space.

There were but a few other visitors –

all masked and appropriately social distancing – amid this riot of kinetic colour and dynamic imagery, some paintings, which seemingly clambered to the highest point of the walls.

Sharpe’s self-declared agnosticism about the existence of ghosts in the gauche popular imagination is channelled into an exploration of extrasensory perception – trace memory, fragments of quotes, and a relentless, borderline obsessive documentation of the accumulation of lives’ ephemera.

Indeed, Sharpe created the murals – that spill out and around the mounted canvases – in front of a live audience of gallery patrons, when the exhibition launched in December, inviting a literal ‘lifting of the veil’ between worlds of process and incarnation.

Even without Sharpe perched on a stepladder, Ghosts possesses an undeniable, animal vibrancy, giving breath to shared anxieties, frustrations, and ennui. Sketches, seemingly barely finished, still twitch with a Kentridge-esque animation that make me check from the corner of my eye that they aren’t actually moving.

In the exquisite Carte de Visite, Sharpe has collected these delicate glimpses of real people posed in old photographs and has added touches of whimsy – a pigeon on a shoulder and other small, contemporary embroideries, as though reaching to them, sharing a smile. Sharpe quotes the writer Jorje Luis Borges: ‘I am all those who are no more’.

Ghosts reminds us of the preciousness of minutiae in a time where it may seem more grinding than grandiose.

Sharpe won the Archibald in 1996 for Self-Portrait as Diana of Erskineville, a juicy, cheeky, beguiling piece. There is plenty of classic, lush, reiterations here, where she portrays herself, gazing back at the viewer. In Self-Portrait with Ghosts, for example, (by far the most literal work on show), this seems like the beginning of the thread she teases out.

And there’s information about her matrilineal Russian-Jewish background, the psychics in her family (according to her, the ability “skipped a generation”), and their association with the notorious Madame Blavatsky.

The wall dedicated to her palimpsestic outpouring is gloriously generous, as though you’ve been personally invited to her studio. It’s worth poring over the detail and complexity. She borrows from the poet Charles Baudelaire, the Ur-flâneur, as she observes, absorbs, and records.

Forever is Composed of Nows (title filched from Emily Dickinson), is a stand-out work, featuring a younger woman and an elder, both nude. Their relationship is unclear: Mother and daughter? The same woman and her former/future self? Lovers?

Sharpe doesn’t include the poem, but some lines of it are: ‘’Tis not a different time / Except for Infiniteness / And Latitude of Home’.

Ghosts reminds us of the preciousness of minutiae in a time where it may seem more grinding than grandiose, and these granules are what becomes left of us.