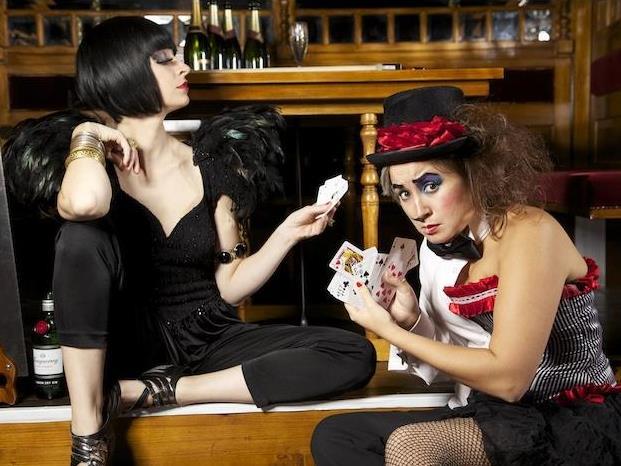 Returning to Fringe World, Bernadette Byrne and Victor/Victoria (aka Victy), build on their reputation for clever novelty lyrics, off-beat performance antics and strong characterisation to deliver a frivolous hour of solid entertainment.

Arrive early to a show, and chances are that you may be greeted personally by the vampish figure of Miss Bernadette, prowling about the audience and chatting amiably. If not, you can admire Victor/Victoria’s striking costume, half dapper-gent and half classic-showgirl, as the ‘one-man-one-woman band’ plays the musical saw. The mood changes abruptly with the entry of Miss Bernadette to the stage, a triumphant arrival perched atop the back of a double-headed man-beast – a concept that could only have risen out of Fringe.

Onstage banter between the two performers punctuates and contextualises some witty pieces. The ballad of the ‘Flexible Man’ brings bright high notes from Miss Bernadette and the ode to David Bowie as the goblin king (‘Celebrity Sex Dream on Mars’) is delivered with the clear and precise diction needed to successfully convey the myriad disturbing images conjured by the ditty’s rapid-paced lyrics. Victy’s voice works well to provide harmonies and explanatory asides throughout, and in ‘Tiny Sex Robot from the Future’, the audience is treated to an extended solo of her sultry vocal tones, with sufficient clarity in diction to disturb those with visual imaginations.

Miss Bernadette shows herself to be a true Fringe performer, working the audience right to the difficult-to-reach centre parts of the rows, relishing the chaotic interaction. Victy plays to a different fan base, with extreme facial expressions conveying distaste for participatory theatre, and winning out over interlopers with the assistance of a double barrelled shotgun… all acted out with winsome charm.

Cleverly smutty, charmingly dysfunctional, EastEnd Cabaret know how to bring good times to a spiegeltent and it is delightful to see them return to Fringe World.