The atmosphere in the theatre was electric.
Charlene Li
[This is archived content and may not display in the originally intended format.] 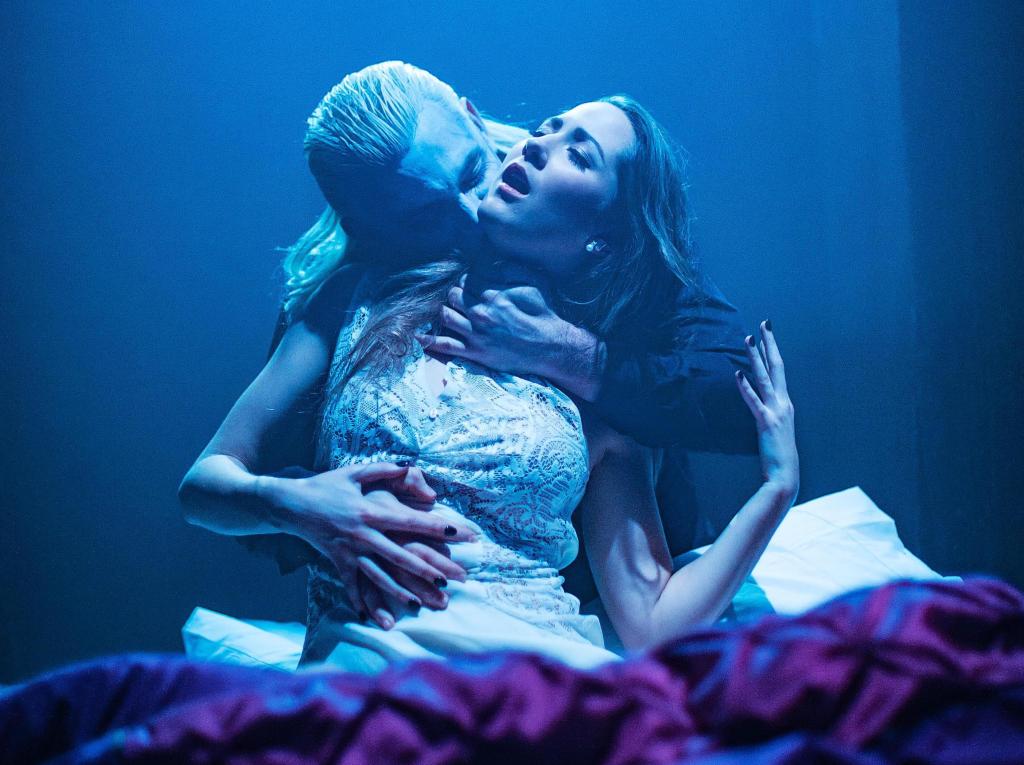 In Dracula the audience may find a series of contradictions. The production is somehow both contemporary and fresh, yet unmistakbly authentic to Bram Stoker’s iconic novel  from which it has been lovingly adapted. The characters and motifs are familiar — even if you haven’t read the novel or seen the film adaptations, the myriad pop culture iterations are hard to miss — yet they’re presented in a way that makes you feel as if you’re seeing them for the first time. The classic struggle between good and evil, innocence and sin, also remains. All of this makes for a thrilling piece of theatre, as substantial as it is stylish.

The theatre opens in pitch black, with the narration of a harried Jonathan Harker beginning to reflect back on the unfortunate business trip that led him to Count Dracula’s lair. We are then taken to the Carpathian mountains in Transylvania, where this young solicitor, sent to oversee real estate transactions, arrives at the grand and ominous residence of his client late at night.

The scenes then transition back and forth between Count Dracula’s castle in the Transylvanian wilderness where all that is sinister flourish and fester, and the more orderly and sedate scenes in Victorian London where Mina, Harker’s fiancee, pensively awaits his return. In London we also meet Lucy, Mina’s spirited and flighty friend, Jack Seward, Lucy’s spurned ex-fiancee and a rational psychiatrist skeptical of all that is superstitious and fanciful, and Van Helsing, Seward’s mentor with an unlikely history. Comic relief comes in the form of Renfield, Seward’s patient whose cartoonish antics conceal a portent of things to come.

This is a visually striking production with a sense of film-like grandness, which is yet another contradiction given that the set design is economical and there isn’t much in the way of fancier effects such as the film projections used in some of their previous productions. What’s used is used well, with each of the elements tying together organically; from lighting, to costumes, to sound design.

The staple of the production — the acting — is of such a high quality that it would be engaging on its own, even without the visual elements. The actors embody their characters in every sense of the word, with a fair amount of impressive physical theatre among the dialogue. The ensemble cast work together with the cohesiveness of a single unit, orchestrating moments of suspense, terror, and comic relief with equal skill. The stand-out performance is not surprisingly from Nick Skubij, who plays the titular role of Count Dracula with a maturity and stage presence befitting someone centuries older, and who was at times genuinely terrifying.

As their name suggests, Shake & Stir’s aim is to create innovative, provocative theatre, the majority of which so far have been literary adaptations that present familiar plot lines in a new light. It’s also worth noting that they are educators, with a robust in-school touring program and a Shakespeare festival for teenagers to add to their collection of hats. In going to see Dracula, audiences can expect to be entertained, viscerally engaged, and also leaving the theatre with a newfound or rekindled obsession with the original Dracula.

In the showing I attended the atmosphere in the theatre was electric.  The audience was in the palm of the ensemble’s able hands, and rose to a unanimous standing ovation at the play’s conclusion.

Showing until September 5, with a midnight performance on the Friday 4 September