This landmark exhibition celebrates one of the world's most influential artists in music, fashion, film and performance.
Trevor Gager
[This is archived content and may not display in the originally intended format.] 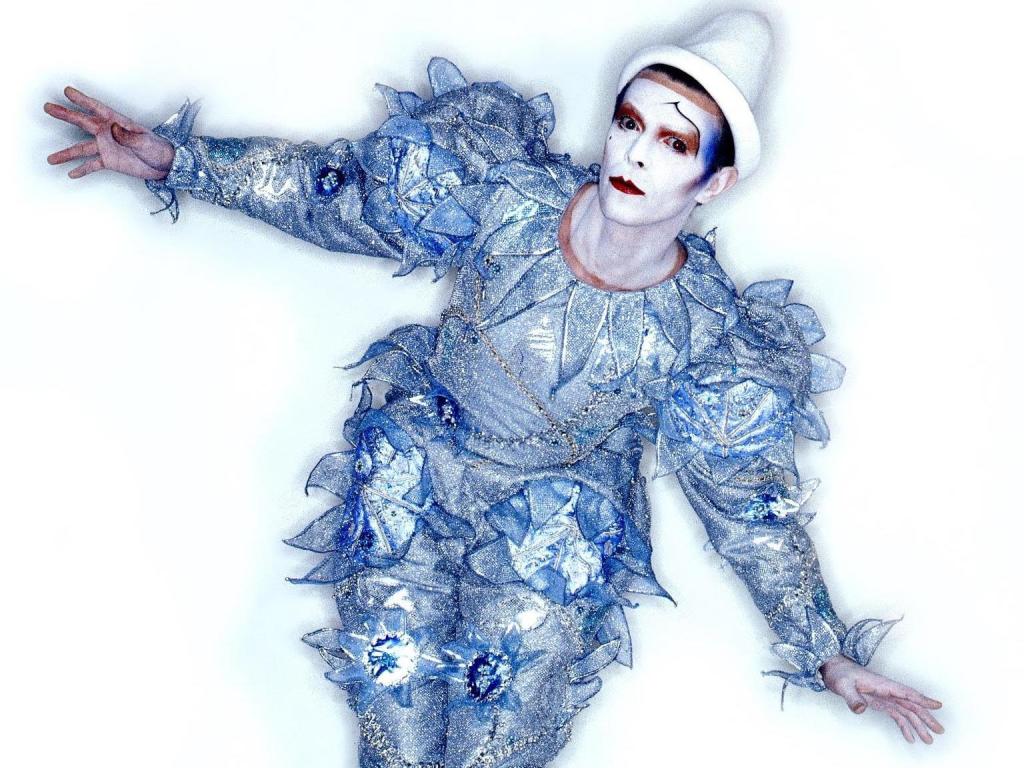 David Bowie during the filming of the ‘Ashes to Ashes’ video, 1980. Photograph by Brian Duffy.

It’s been two years since David Bowie is broke box office records at the Victoria and Albert Museum in London. Now, after shimmying its way around the world and ​attracting over a million attendees, the touring exhibition has finally fallen to earth at Melbourne’s Australian Centre for the Moving Image (ACMI).

As a lifelong dedicated die-hard follower of all things Bowie there were a number of boxes that I felt needed to be ticked before I could honestly proclaim this show to be the runaway success that the majority of mainstream media have deemed it to be. Firstly, would there be enough substance to satisfy my own insatiable thirst and at the same time keep the more casual observer entertained? What would the curators choose to leave out? And the most obvious question, would the exhibition be able to clearly convey the life and work of an artist as multi-faceted, complex, and innovative as David Bowie?

When the V & A were given unprecedented access to David Bowie’s archive (which astonishingly equates to some 75,000 items), they had very clear ideas as to what they did not want this exhibition to be. To quote Assistant Curator Dr Kathryn Johnson when describing the processes involved: ‘The first principle seemed to be to interpret the past though the lens of the present. We know that Bowie continuously references his past work, visually, sonically, and that’s part of the reason he kept all this stuff I believe, but he’s not nostalgic. We decided early on that out of all the things that David Bowie is, David Bowie was not chronological and we did not want the exhibition to be a plodding review of his life from birth through to the present.’

With this in mind the man behind David Bowie (AKA David Robert Jones) is still introduced and some history and background given.

Upon entering the first display room (wearing headphones and a unique Sennheiser ‘guidePORT’ receiver system) you are transported back into David Jones’s London – circa 1950s and 60s – and given a unique glimpse into the early life of the ultimate cultural alchemist.

It was overwhelming to be surrounded by so many personal and intimate items from Jones/Bowie’s childhood and teenage years. Included are original photographs, various items such as books and posters, and artwork and design concepts that work together to highlight important early influences and demonstrate his innate creativity.  Two of my favourite images from this section of the exhibition are the now iconic promotional shot taken in 1963 whilst in his first band The Konrads, and a framed picture of Little Richard, which once hung in his bedroom.

After soaking up the wonderfully personal ambience (helped in part by the audio which plays like magic as you enter each new space) I was transfixed by an incredible three-dimensional, immersive video installation. This non literal, non linear abstract representation of David Jones perfectly illustrates Jones/Bowie’s own thinking during this early period and throughout his career; and clearly pushes the idea that amongst many things, David Bowie is a multi-dimensional medium.

Interestingly, this installation and many other spectacular elements throughout the exhibition were created by a company associated with integrating film and video elements into live performance: UK based 59 Productions. Their contribution to the exhibition creates a seamless, integrated experience, adding in part a live concert feel (especially at the end of the show).

Even before I had experienced the main elements of the exhibition I was sold. So sold in fact I would have been content spending the entire day with the young Mr Jones. It was, however, time to move on and into the world of David Bowie proper…

One of the major drawcards of this event is the opportunity to see the mind-blowing collection of clothing and costumes on display; and believe me, for the most part everything is here. From designer Freddie Burretti there is the Ice-Blue suit from the ‘Life on Mars’ video as well as the earliest incarnations of Ziggy Stardust featuring his iconic jumpsuits. There are exquisite creations from designer Kansai Yamamoto including the otherworldly costumes that took Ziggy/Aladdin Sane to America, and helped put Bowie in the headlines and on the walls of every rebellious teenager. A must see for many will be the iconic Pierrot or ‘Blue Clown’ costume designed by Natasha Korniloff and prominently featured in the ‘Ashes to Ashes’ video from 1980. With 50-plus outfits on display you will not be disappointed; anyone interested in design and fashion will love this.

As wonderful as all of this is (and believe me it is wonderful) the above exhibits are not my personal highlights. What I absolutely love about this exhibition is the way the curators have managed to interweave Bowie’s creative vision and process throughout the show. This is done by the inclusion of numerous handwritten notes, drawings, story boards, and an insightful look into the re-invention of William S Burroughs’ cut-up technique with Bowie’s co-created computer software the ‘Verbalizer’.

Also included amongst the 400 + exhibits are an amazing selection of original handwritten lyrics and music notation (‘Space Oddity’, ‘Ziggy Stardust’, ‘Starman’); original album artwork (Scary Monsters and Super Creeps is especially stunning and much larger than expected); and numerous rare archival film clips (including footage of the now infamous meeting of Bowie and Warhol). His acting career is also covered, though does not feature as much as it possibly could have (especially if you are a Labyrinth fan). I was happy however that Bowie’s Broadway debut, The Elephant Man in 1980, does get a good showing. Seeing the original loincloth worn in the production I found fascinating, for some reason.

As you progress through the exhibition you will be immersed in Bowie’s Berlin period. One of the highlights is a chance to get up close and personal with the EMI Synthi AKS Synthesizer purchased by Brian Eno in 1974, and used for the recording of ‘Heroes’. The paintings on display in this space will showcase what an extraordinary artist David Bowie is.

Upon leaving the Berlin room and entering the final and the largest space of the exhibition, headphones are removed and the genius of design company 59 Productions can really be experienced. With massive screens, spectacular lighting and Bowie music turned up to 11 it is sensory overload. The costumes juxtaposed within the installation add to the illusion of stepping into a live Bowie concert.

As a final note, visitors to this exhibition will have the added bonus of seeing additional photographs and memorabilia marking Bowie in 1983 (the filming of the ‘Lets’ Dance’ / ‘China Girl’ videos), and his Melbourne show, the largest concert in Australian history at the time.

In summary, David Bowie is is extraordinary.