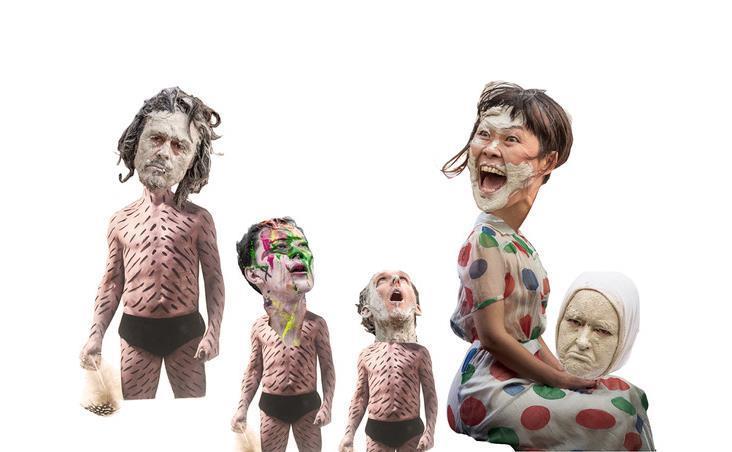 Colour-Fool was developed in workshops as part ButohOut! 2021: New Ab/Normal, the fourth Butoh festival directed by Yumi Umiumare. It begins in the Dance House foyer with hand-sanitiser distributed from a hat, a woman wanting spare change, and a man in yellow walking his pet banana.

The mood changes on the stage with brown paper bags and people dressed in full white PPE suits. The bags alone are a gut-flickering reminder of a year when food delivery became too normal. Yumi Umiumare had more deliveries than most because she had to quarantine in a hotel in Sydney. She kept all of the bags. She was in quarantine because she’d been home to Japan to see her dying father.

Butoh was created in Japan the 1950s and 60s in the aftermath of the lived trauma of the Second World War and is an almost obvious expression of Covid and 2020. Umiumare’s style of Butoh incorporates contradiction as a necessary force of life; it’s as experimental, fun and non-sensical as it is personal, heart-gripping and necessary.

Umiumare first came to Australia in 1991 as a performer with Japanese Butoh company Dai Rakudakan. Since moving to Melbourne, her solo work and collaborations with companies including Finucane & Smith and The Rabble, have brought the philosophy and practice of Butoh to Australia and created a unique expression of Butoh that’s become part of Melbourne’s cultural currency.

Butoh is an evolving form that is often defined by what it looks like, but is always about what it feels like. Traditional Butoh is recognised by dancers in white make up performing with exaggerated, grotesque and animalistic expressions and movement. But even with its characterised ritual-like repetition, slowness and bent-knees, it’s not really comparable to choreographed dance. Butoh performance is emotion made physical. It’s difficult to describe because the emotions it expresses with are so complex and layered that they are impossible to describe.

The emerging and experienced performers (Kiki Ando, Emma Bathgate, David Blom, Jessie Ngaio, Pauline Sherlock, Tomoko Yamasaki, and Takashi Takiguchi) participating in the workshops (facilitated by Umiumare and Emma Bathgate, voice, and Jacqui Stockdale, visual arts/mask/collage) were asked to start with the idea of ‘Something odd, something not fitting in, something not matching, something bent and broken, something abandoned yet something perfect for you at this moment’.

Each have a place for their own odd, broken and perfect story in the overall theme. And each have their own colour for their costume and make up. As the Butoh convention of white make up is replaced with bright colours, the pun of the title becomes joyous.

While the work begins and ends with reflection about the dissonant experiences of quarantine, the individual stories remain unknown. Explanation is unnecessary as audiences are free to understand, enjoy or dismiss them in any way we like – or dislike.

The strength of this performance is its integration of the unknown personal experiences into a cohesive work about the universality of the abnormality of living the ‘new normal’. There are some distracting and drawn-out moments that feel like individual or workshop processes and could have been left out, but in a work about embracing imperfection and complex emotion, it’s hard to worry about an unnecessary 15 minutes.

There were only three performances of Colour-fool, but a new ButohOut! 2021 performance called Odd Hours is showing at the Abbotsford Convent from 20 – 23 May.