Keziah Warner’s play shows that the stage, in its analogue austerity, has something to add to sci-fi.
Raphael Solarsh 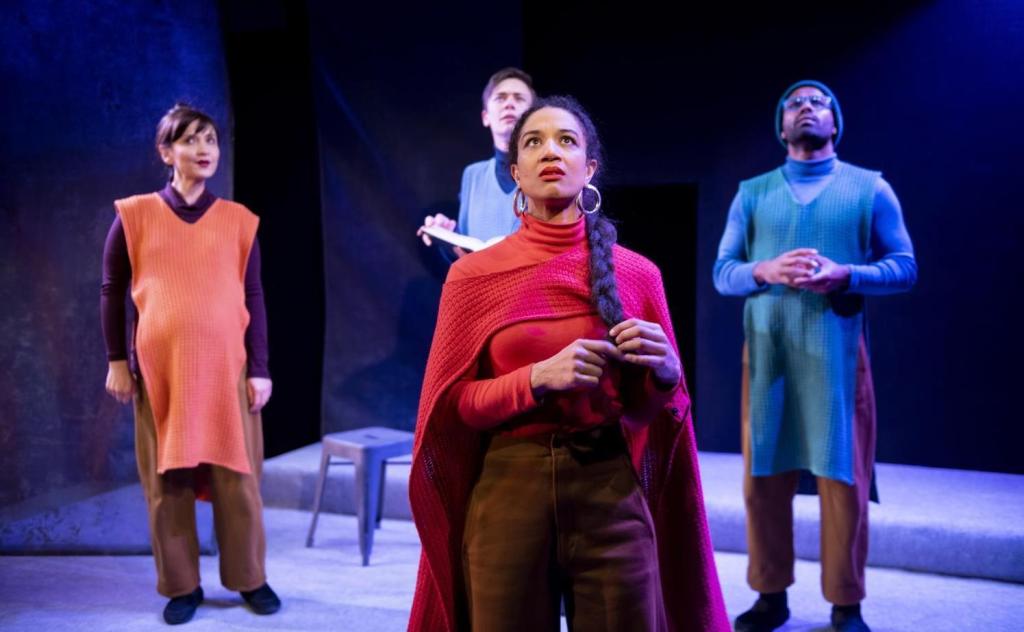 The stage is often considered too analogue a medium for imaginings of the future. Indeed, how can we separate the technology driving that future from the stories that we use to corporealize it? The cinema, with its gargantuan budgets and mind-bending special effects, is the preferred medium for creating what seems to be the defining element of future worlds: scale. It has to be big, it has to be grand. It has to be sufficiently different as to extend past the time that our present anxieties can effectively construct. And yet, some of the best sci-fi is less about the shape of the unrealised world and more about the shape of humanity in it. So perhaps the stage, in all its analogue austerity, has something to add.

Control is more a patchwork than story – the parts of the video that you didn’t skip, whose gaps you can’t remember because you were scrolling down something on your phone. This glitchy quality has a wonderful effect of making it all feel like a future looked back on rather than projected. And that sense of hindsight seems to subtly amplify the sense of loss and confusion that the characters feel in settings that continually challenge their sense of humanity and place.

The first act is a kind of Big Brother in space, populated by the C-grade celebrities of the time: a failed pop star and a clean-cut Aussie reality ‘star’ who is a strange combination of the Bondi Vet and Russell Coight. With them are a heavily pregnant ‘commoner’, and a conspiracy theorist keen for a fresh start. It sounds absurd written down but it has Black Mirror-esque compulsion to it that turns the psyches of ordinary people into fair game for the purpose of entertainment.

The second act shows the world left behind by this cast of four. It moves into the ‘Museum of Childhood Memory’, a kind of Dropbox for the mind, with a thread of class consciousness. The haves can pay for privileged access, while the have-nots must accept the limited free version. In this place, a black market of favours and mercenary manipulation operate under the eye of an ever-present observer.

Finally we move forward to the Martian colony where a human trainer must prepare a replicant-esque android for their pre-determined purpose. In this case, ironically, a teacher.

What sets this final passage apart is that for the first time we see the observer. This sense of the power of the observer evolves brilliantly through the three acts and the culmination is both the most human and most powerful, as is the eponymous theme. It is the extent to which we feel we are able to make choices that we believe we’re in control. And the loss of control is terrifying, whether or not it really existed in the first place. This tenuous and fragile state is artfully manipulated and explored in this compelling production where ideas seem more concrete than the ephemeral story.

Control is brilliantly written, staged and performed and a formidable argument for more stage and less screen in the world of sci-fi and futurism.