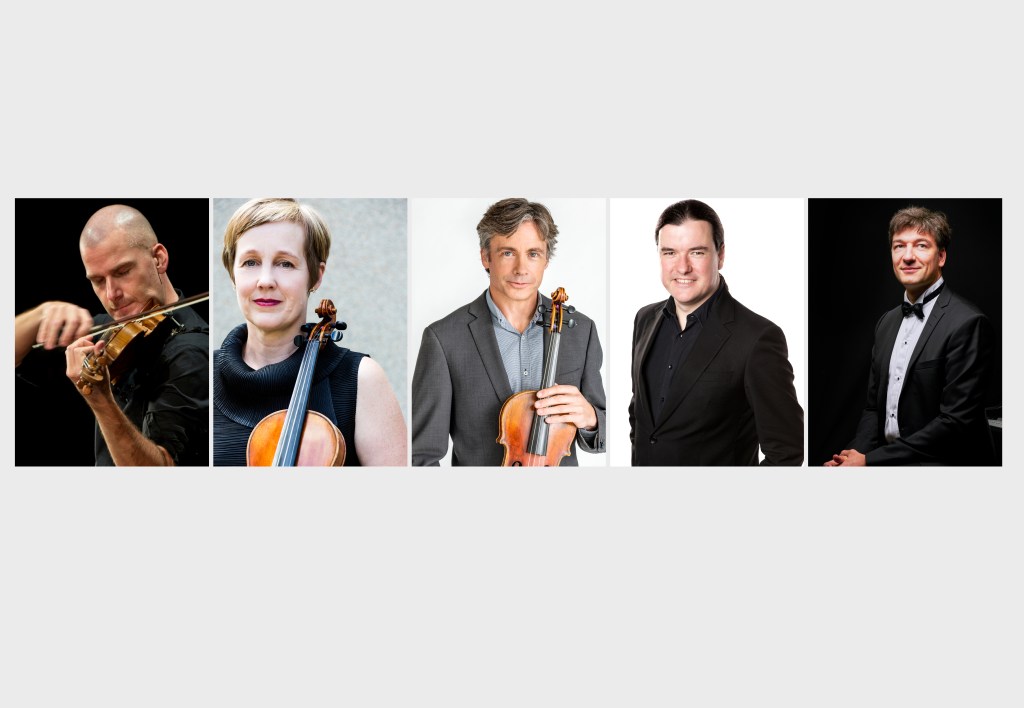 The musicians are ‘friends as well as musical colleagues, and that imbues their playing with a certain warmth and confidence.’ Image supplied.

Musica Viva has become adept this year at restructuring its concert series in response to the various lockdowns and travel restrictions. This concert was to have featured the Goldner String Quartet and Piers Lane, but that was not to be. In their stead, Musica Viva put together an impromptu string quartet of excellent local players who were joined by the acclaimed pianist Konstantin Shamray.

These musicians are all well-known to the Adelaide classical music audience. Violinist Cameron Hill and cellist Simon Cobcroft are both principals with the Adelaide Symphony Orchestra; violist Stephen King is with the Australian String Quartet, based at the University of Adelaide; and violinist Helen Ayres has played with many local and international orchestras. They are also friends as well as musical colleagues, and that imbues their playing with a certain warmth and confidence.

The program opened with the String Quartet No 15 by the Australian composer Peter Sculthorpe.

Introducing this, Stephen King said the players were ‘doffing our hat’ to the Goldner Quartet by acknowledging the very special relationship between the composer and Goldner. Many of Sculthorpe’s works were written for, and premiered by, the Goldner Quartet who also recorded the full suite of works.

The Fifteenth is made up of five short movements based on a sequence of songs belonging to the Simori mountain people of Western New Guinea. Like many of Sculthorpe’s compositions, there are echoes of the bushland, of water and streams, and of animals and birds in their habitats. Together, the five movements allow each instrument to shine as they explore the many feelings and textures in the work.

Dvořák’s superb String Quartet No 12 in F major, known as ‘American’, came next. Composed in just two weeks during a family holiday in June 1893, this is considered one of his most significant works.

It opens with a strong theme that still sounds European even though the composition as a whole is an homage to his new life in America. And although the first and second movements sound bohemian, new influences can be heard progressively throughout the cheery third and fourth. Indeed, the finale sounds positively modern and forward-facing. There are even sounds of the railway tracks and Grand Central Station if you close your eyes and listen closely.

After interval, the strings were joined on stage by pianist Konstantin Shamray, again a player who is well-known to the local audience, for the highlight piece, Brahms’marvellous Piano Quintet in F minor. As is the convention at these performances, Shamray said a few words before taking his place at the piano. Rather than telling us about the Quintet because ‘you can read that in the program notes’, Shamray told us a little about the man himself. Brahms was not a politically correct person, it seems. Leaving a party one evening, Brahms apparently said ‘I sincerely apologise if there are any people left in the room who I did not offend!’

This piece was worked and reworked in different forms before the composer was happy with the result. It was first written purely for strings, with an extra cello making up the five instruments. He then reworked it with two pianos before finally settling on the string quartet with one piano.

And what a triumphant composition this is, brimming with so much musical invention and so many clever contrasts in the four distinct but sympathetic movements. This is chamber music at its most imaginative and it was a delight to see the players working so tightly together. Shamray’s pianism was of the highest standard and perfectly balanced with the strings. It was just a little disappointing that the piano was placed behind the seated strings, so Shamray could only be heard and not seen. I would have loved to see his dynamic prestidigitation! And then it was all over as the colourful climax was rightly met with enthusiastic applause from the satisfied audience.

Musica Viva Australia performed at the Adelaide Town Hall for one night only: 22 September 2021.