Circus Under My Bed 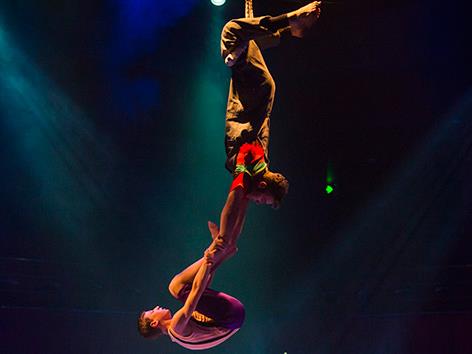 The Flying Fruit Fly Circus’ Circus Under My Bed is a well-produced romp through the mind of a young girl, Celeste as she interacts with a horde of circus performers in her bedroom. Played by young performers between the ages of 9 and 19 known as the Fruities, the entertainment begins before the guests are even seated with clowns and strong men running around the stadium seating, dusting off chairs for the audience prior to the raising of the curtain. The atmosphere of the circus is set with big top music and the smells of popcorn wafting across the arena.

The voiceover of Celeste’s mum bellowing over the loudspeakers for Celeste to finish packing her belongings sets the scene for the play as the giant mattress to the rear of the stage starts its first incarnation as a child’s bed. Lamenting how she will pack all her things before bed-time, Celeste comes across the top-hatted ring master who lives up to his name by conjuring up an act of tossing spindles through the air. The ring master’s dialogue is again delivered through the speaker system, avoiding the need for the actors to address the audience and making the interaction seem more like a mime than a performance.

Suddenly the scene is transported again into a grassy meadow as a roll of astro turf is thrown over the pillows and doona of the gigantic mattress. Bleating, woolly-clad sheep burst out of every orifice of the stage, delighting the younger crowd by running rampant through the audience. The addition of a dog on the scene causes the sheep to retreat behind a fenced barricade leaving a single gate erect in centre stage. It is through these bars that the acrobatic prowess of the stars really comes to the fore with the dog and sheep performing flips, summersaults and jumps in an action packed piece and one sure to delight the many children in the crowd.

An imaginative spin is given to each circus act, transforming the quintessential circus performance into an original feat of colour and spontaneity. The typical clown on a ladder favourite is represented by a girl trying to reach for her floating balloon, the spinning plates debacle is hilariously portrayed by a chef giving his cooking demonstration and the hula hoop spectacular is integrated into the poignant Tale of the Sad Clown. The costume and prop design for each character is impeccable with clever attention being given to slight details such as the lighting of the balloons and make-up of the clown. Taking out the award for the best dressed were the balancing duo Page and Livre whose leotards bore a book motif, especially the pages spilling out accordion style at the elbows and knees. Being the opening night, there were some wobbles on the elaborate book ends on which the difficult hand stands were performed, serving to detract slightly from the confidence otherwise displayed by the performers. However the target audience of children under 10 for the show are unlikely to be perturbed with such minor jitters.

Opening during the last week of school holidays at the Canberra Theatre, Circus Under My Bed has a distinct demographic in mind for its tour. All across the stalls, weary parents sighed with relief at the 90 minute reprieve given to them while their kids in tow were mesmerised by the spectacle taking place before them. Presenting a simplistic story which is high in aesthetics and low on acting ability, young minds are suitably entertained with the extravagance on display. Adults, however, may be a little less impressed as the acrobatic skills are certainly no match to those of professional circuses. Regardless, at prices well below the cost of a standard performance ticket, the key to enjoying a night out with the Fruities is to appreciate the value for money available with a production featuring acrobats in training.

The success of Circus Under My Bed lies in the Flying Fruit Fly Circus school’s feat of bringing to life a dream come true for many aspiring entertainers. Based in Albury-Wodonga and filling an ever-widening schism in the rural creative arts scene, the school holds competitive auditions for children to train as professional acrobats. Established in 1979, the inspirational progression of the school has resulted in its growing international presence, as the young students participate in collaborative exchanges and tours spanning China, Japan, Turkey and Canada. Beyond providing an hour or so of relaxation for stressed parents, the performance then plays a much larger part in the development of young physical theatre thespians and their ability to engage the minds of their younger contemporaries.

Hopefully, an early excursion to the Flying Fruit Fly Circus will inspire young theatre goers to appreciate the acrobatic art form from an early age. Although more mature audience members may be slightly underwhelmed by the level of skill on offer, the enthusiasm of the performers and professionalism shown towards providing the visual spectacle will nonetheless put a smile on most people’s faces. Younger fans will nonetheless be enthralled at a show that has no qualms about sending a whole troupe of acrobats onto the stage all at once. A welcome school holiday treat to reinvigorate the imagination of youth.

Circus Under My Bed