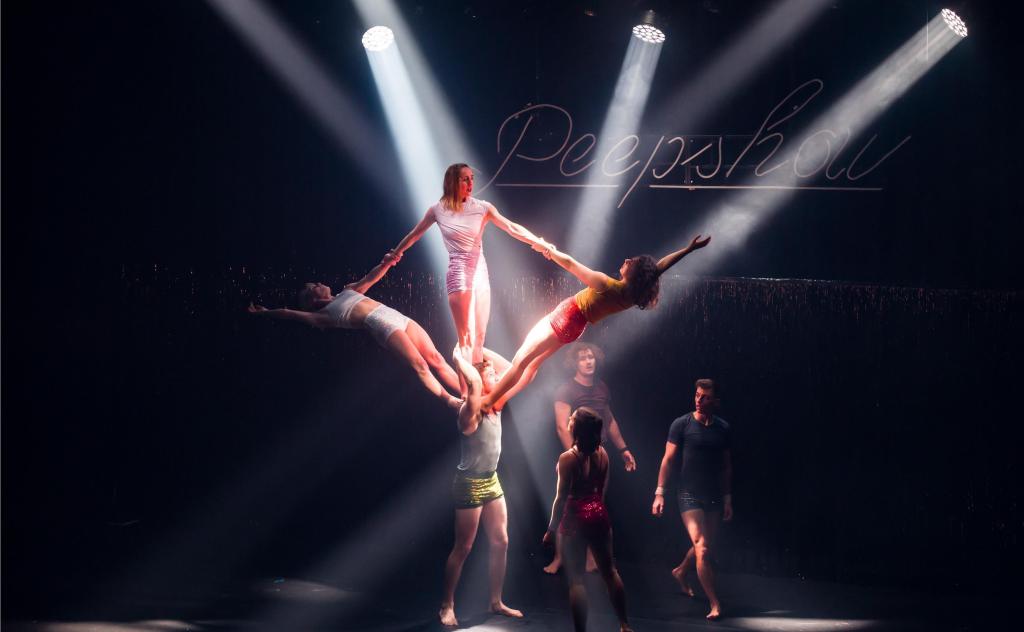 Circa’s Peepshow is an invitation to contemplate human restlessness and the extraordinary actions and connections that come from that side of us that we constantly try to repress and put aside. The acrobats of Circa often fret and shake, one after the other and then together just before tumbling and stacking over each other to form teetering towers of bodies in balance. And then, down onto the floor, ready to do it all over again, and again, and again, for their pleasure and for our amusement – all with a good sense of humour. They like to keep it light for us, these acrobats, even when things are heavy and unstable!

This is the power of circus: it is a reminder of what human bodies can do when we keep showing up and pushing our limits.

The show lives up to Circa’s reputation as a leading international circus performance company. Circa’s Peepshow has played internationally, in the arts hubs of London and Berlin, and then in France, Austria, and the Netherlands. In Brisbane, it plays at the Cremorne Theatre – the smallest venue at QPAC – which creates an intimate experience.

The scenography and costumes are simple yet effective. A sparkly tinsel curtain coming straight from 80s dance parties separates the front stage from the back stage. Lights are masterfully projected onto the curtain to make it change colour and to cast shadows. Fuchsia gloves populate the most risqué acts of the show and shiny pants glue your eyes to the performers’ bodies.

The dance party vibe continues with a playlist of skilfully adapted songs, including Velvet Underground’s Venus in Furs and The Eurhythmics’ Sweet Dreams. Some are sped up; others are slowed down to create a sensual atmosphere.

The seven performers on stage collect a range of physical skills including contortionism, hula hooping, aerials, balancing, and shared weight that are linked together with comedy, sensuality, and at times also a bit of drama.

Circa’s Peepshow is a show that has it all: light cabaret entertainment that does not shy away from moments of reflection. It keeps you there by being alluring but not too revealing, and its athleticism will make many ‘wows’ slip out of your mouth.

Circa’s Peepshow will tour to Nowra and Canberra in April. All tour dates here.