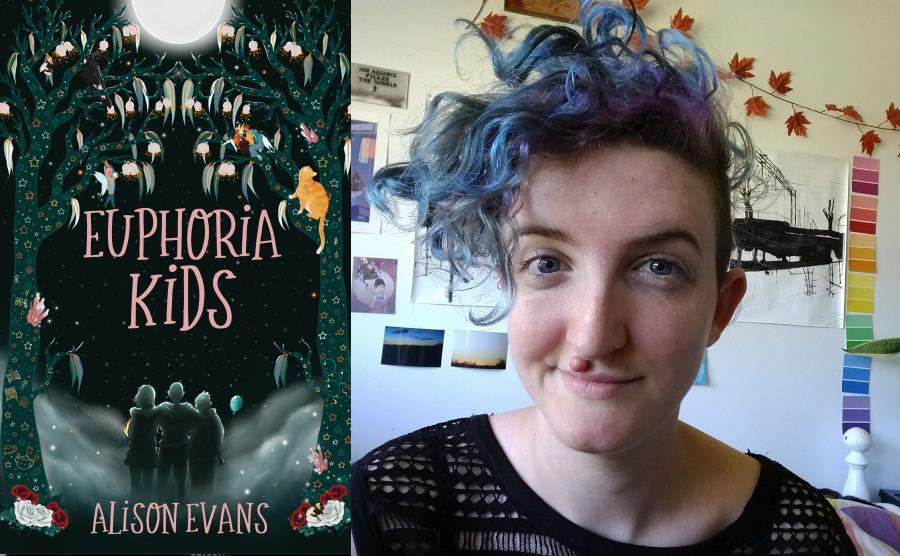 Alison Evans’s latest novel, Euphoria Kids, is a YA work, and beyond that it is not easy to define. Katya de Becerra describes it as ‘perfect for Studio Ghibli fans’, and this is an apt comparison. This work has a magical fairy tale atmosphere, full of bewildering events that are meant to teach the young protagonists – and readers – about life and friendship.

In the opening chapter Iris, who was born from a seed in the ground, is lonely and wants a friend. So their fairy friend Saltkin casts a spell of friendship and that day Iris meets Babs. Not long after that, Iris and Babs meet the boy, who at the time has no name and is not yet entirely sure who he is. Each character recognises the other as magical and as trans, beginning their friendships by asking for each other’s pronouns, an aspect of queer culture that is also present in Evans’ previous novel, Highway Bodies.

All three protagonists are looking for something: Babs was cursed by a witch when she was a child and now randomly becomes invisible, an affliction she wants lifted; Iris is magic, and their magic is growing, but they need a teacher to help them continue to grow; and the boy has no name and does not yet know what he is made of, and his journey is to discover these things about himself. The story arc of Euphoria Kids is very gentle, progressing from them meeting each other to attending school together, having sleepovers, meeting each other’s parents, casting spells, and giving each other tattoos. The rhythms of their teenage lives, and the state forest that they often wander in, has a very Australian flavour, and this gives the story an extra layer of authenticity that adds to the overall atmosphere.

At the beginning of the novel Evans – who is nonbinary – includes a letter saying that they want ‘people to know about gender euphoria… to learn about it before gender dysphoria. I want the young trans kids that will read this book to be proud of who they are, and imagine wonderful, magic lives for themselves.’ The tenderness, charm and wonder of Euphoria Kids conveys perfectly a sense of safety, support and joy in connecting with others like oneself, and having them there for you as you go out into the world and come into your own. Or, in this case, venture into a magical realm in a forest where a curse-throwing witch abides. Evans perfectly blends reality with magic, and I expect YA readers will love it for its beautiful atmosphere as much as its portrayal of vital friendships.