Displaced: A Rural Life is an eclectic mixture of personal reminiscence, poetry, and advocacy dressed as opinion.
Erich Mayer 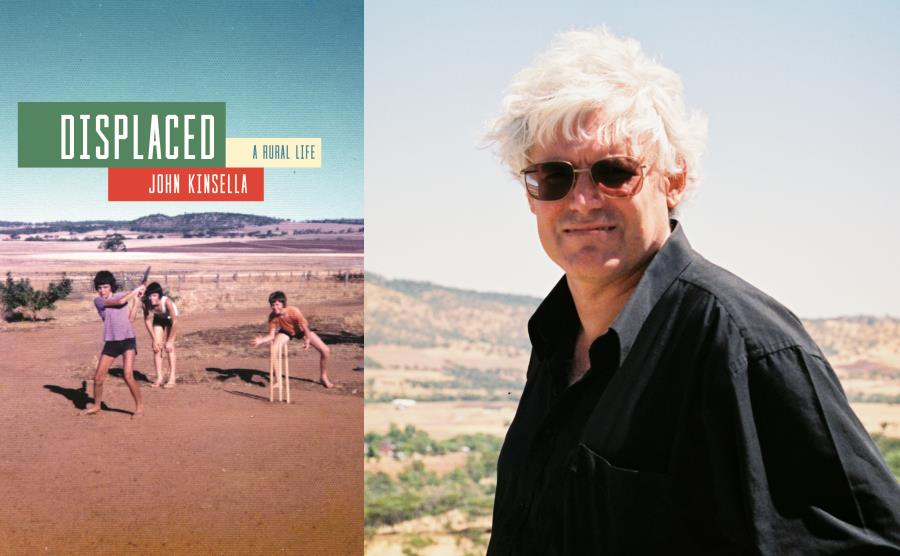 John Kinsella defines this memoir as a ‘polyphonous conversation’. Whether perceived as a dialogue with the reader or as a monologue by the author, Displaced: A Rural Life is a work in which Kinsella reveals some of himself and a great deal of his views on a number of significant issues; it is an eclectic mixture of personal reminiscence, poetry, and advocacy dressed as opinion.

Kinsella lives his beliefs not only as the vegan he has been for the last 33 years but as a person passionate about humankind’s obligations to all aspects of the environment. He is sincere, articulate and convincing in his arguments, and can be forgiven for occasionally repeating himself. He is also unequivocal in his views: ‘Never forget that for all its multiculturalism, Australia is a deeply racist country with an apartheid against its First Peoples.’

Kinsella recounts many episodes from his life, not in chronological order but rather as they occur to him or as they complement or supplement what he is saying. We learn about his success as a young philatelist, and we hurt with him when, nicknamed ‘Dictionary’, he is bashed up for being too clever. That hiding leads to his period of alcoholism from which he eventually extricates himself to become an ardent campaigner for animal rights and the preservation of the planet. A self-styled anarchist, Kinsella’s version of anarchism is ‘about equality for all living beings, about consensus, collaboration, and communities of individuals that are mutually supporting.’ Kinsella graduates to this position from a childhood that included some sub-optimal education processes, such as a grade one primary school teacher who made him stand in a dustbin because he could read. However, he had a happy, though fatherless, home life.

For the most part, Kinsella focuses on the everyday, not on the dramatic. But the memory of when his car gets bogged down in an isolated place, endangering his son Tim, affected him so much it led to one of his poems. Other poems in the memoir include a few about Tim’s toys.

Jam Tree Gully, sometimes referred to as JTG, is a farm of sorts and it is where Kinsella now lives. It features frequently in Displaced as a very important part of his life and of that of his immediate family. He recounts:

I have always grown organic – actually, veganic (no animal manures etc) ­­­ – ­­vegetables. It is most important for me as a gardener not to damage in order to grow. I work around plants and trees that are already there, and work out issues of sun, shade and soil in accordance with the locale.

Kinsella has lived and worked in the USA, England and Ireland and mentions some episodes from these places, but leaves no doubt his heart is in JTG.  In working his land, he practises what he preaches, namely not to harm any creature. For instance, when a plague of mice overrun JTG, he does not kill a single rodent, but goes to a lot of trouble to stop the mice entering his home. He is incensed and helpless when poisonous insecticides drift in from a neighbouring property. Naturally, his protests on this occasion are non-violent, as are other protests he references.

After all, Kinsella believes in persuasion, and this memoir is above all a persuasive appeal to be active against any form of discrimination and to recognise the rights of all creatures to co-exist.