The popular musical, set in Britain during the Thatcher era, is back to impress new audiences with its uplifting story.
Lynne Lancaster 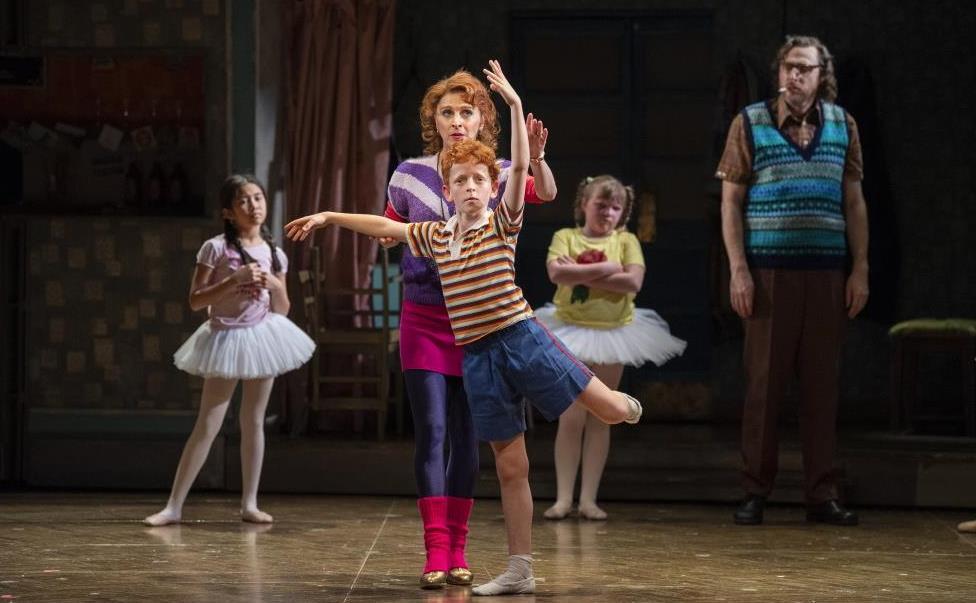 Billy Elliot the musical has returned for a spectacular 10th anniversary tour.

Opening with black-and-white footage of the nationalisation of Britain’s coal industry, the show then moves to Thatcher’s Britain during the major miners’ strike of 1984-85 and it looks at issues including class consciousness, politics, the subversion of gender roles, and being true to yourself. Billy is an outsider because he swaps boxing for ballet and faces the prejudice that ‘boys don’t do ballet’ which is something ballet companies still struggle against today.

Directed by Stephen Daldry and Justin Weber, with music by Elton John, it is brilliantly realised, smoothly and slickly paced and well-rehearsed with excellent timing. Parts of the show are very tense and tough, with strong language, while other scenes are funny and joyously exuberant or poignant and moving.

Based on the glorious 2000 movie, Billy Elliot tells the tale of Billy, a 12-year old miner’s son who becomes transfixed by a ballet class after his boxing training, and dares to imagine that he has discovered his vocation despite financial hardship and the reaction of his appalled father, Jackie, and brother, Tony. While Mrs Wilkinson helps Billy develop his dancing prowess, the community they live in is in crisis with the miners’ strike and pit closures. The need for self-expression and tolerance is juxtaposed against the needs of the entire community.

The musical draws on British political theatre styles as well as panto – note the Thatcher puppets used at the Christmas party, and a blink-and-you’ll-miss-it appearance from a Boris Johnson puppet. At first, the police are mocked and portrayed as buffoons as in The Pirates of Penzance or the Keystone Cops, but later they are far more menacing. The Once We Were Kings song when the miners return to work after the strike collapses is intense and stark.

The show has a huge multi-level set with segments that can slide in and out, a wonderfully textured back wall, and powerful, dramatic lighting by Rick Fisher. Peter Darling’s choreography for the show blends Broadway/West End musical theatre, classical ballet, tap and contemporary styles brilliantly. The cast is magnificent with the children sometimes stealing the show.

Jamie Rogers, who was Billy on opening night (he shares the role with three others), was tremendous in depicting his character’s emotional arc. We see the tough shell he has to develop. His Angry Dance at the end of Act 1 stops the show as does the Electricity number in which he tries to describe how he feels when dancing. The Swan Lake sequence where Billy dances with his older self (Aaron Smyth) – and appears to fly – gives hope and also references not just the traditional classical ballet, but also the movie version with allusions to Matthew Bourne’s Swan Lake.

Justin Smith (who played Tony in the original Australian production) now plays Billy’s father and reveals the many layers of this complex man. We see him gradually change and become supportive of Billy. When he sings a song at the Christmas party in memory of his wife (Deep Into the Ground) it is most affecting, and we see how he is totally out of his depth when he takes Billy for his audition at the Royal Ballet School.

Kelly Abbey is superb as chain-smoking, laconic, supportive Mrs Wilkinson, stealing the show when she can (for example in her first number, Shine).

As Billy’s acrimonious brother Tony, heavily involved in the miner’s strike, Drew Livingston gives a terrific performance. Vivien Davies is enchanting as Billy’s somewhat dotty yet to-the-point grandma, and her remembering her romance with Billy’s grandad is poignant. Dean Vince as the pianist Mr Braithwaite has great fun as does Robert Grubb as the fanatical boxing teacher George.

As for the other children in the cast, James Sonnemann sets the house on fire as Billy’s cross- dressing friend Michael, particularly when leading the cast in Expressing Yourself, while Gabrielle Daggar reveals lashings of dry wit as Mrs Wilkinson’s daughter Debbie. The others in the ensemble were great too.

An uplifting, powerful and inspirational performance.

The production will go on to tour Adelaide, Melbourne, Perth and Brisbane