A spectacularly good concert from the Australian Chamber Orchestra, featuring Humphries as MC and the inimitable Meow Meow as a very special guest.
Tomas Boot 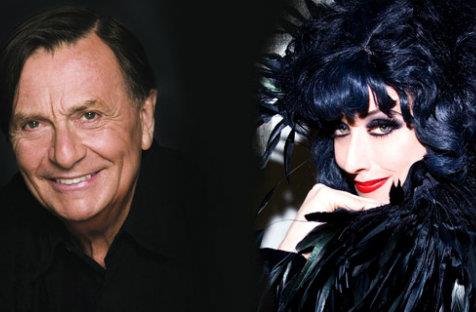 During the interval at the City Recital Hall, an usher had to rush in to stop a hobbling woman who was carrying, with great care, a plastic cup of water. ‘You’re not allowed to bring drinks in, I’m afraid.’ ‘Oh,’ replied the woman, ‘but I keep needing to cough with all this smoke they’ve got.’ Dismally, she returned from whence she came, back into that undersized foyer and its domineering stairs.

I mention this, dear reader, because there was indeed a lot of smoke, or ‘theatrical haze’, as they like to call it on their warning signs. Indeed, at one point it caught in my own throat, though I managed to suppress my cough. (I once heard an actor – I think he had begun to talk of herbal cigarettes being used as substitutes in plays – say that he had always found it amusing when people in an audience would cough every time there was a profusion of smoke in the auditorium. ‘It’s perfectly harmless, though,’ he said. ‘It’s just water vapour. There’s no reason for them to cough. They’re making far too much of it.’ Well, I don’t know about the science of the matter, but, even if it is only water vapour, it can still be irritating.)

There was lots of smoke, is what I’m trying to say. Which, as any regular attendee to the Australian Chamber Orchestra’s concerts would tell you, is a rather unusual event. But the City Recital Hall had been transformed into a seedy, suppurating hole of a place for the evening, with its fog, its dark red lighting peeling the walls, its fog, its orchestral members in black trenchcoats and broken-innocence faces, its fog, its dark atmosphere (no reading of the program here), its fog, and did I mention the fog? Barry Humphries was to be our conferencier for the duration, with cabaret artist Meow Meow as a special guest, and we were to hear music from the time of the Weimar Republic, music that has been, to some extent, lost in time due to Hitler and his cronies.

The most disappointing aspect of the evening was, unfortunately, Barry Humphries’ delivery. Though it was less of a disappointment and more of an irritating mar, like spots on a banana skin. Having been superbly entertained by Dame Edna’s final tour at the Capitol Theatre last year (with appearances from Sir Les Patterson and Sandy Stone), and having been amazed by the fact that he ‘still had it’, as it were, I therefore found it rather deflating to find that Humphries was quite dependent, it seemed, on two autocues on either side of the stage. Whenever he took up the interlude, by telling an anecdote or filling us in on the background of the piece to come, he would inevitably, every few seconds, dart his eyes down to the screens and get his bearings. What it did was ruin the flow, somewhat. However – and this is a big however – Humphries’ skill as an orator virtually made up for this defect, and he was basically as entertaining as ever. One just laments how even more great he might have been. Meow Meow, playing the coquette as she does, seemed somewhat more at ease with flying free.

The concert, which went for two hours 40 minutes, rushed past in a flurry of melancholy, sex, and jazz, with 20 pieces on the program. Highlights included the opening number, Hindemith’s Kammermusik No.1, Op. 24, Jezek’s Bugatti Step, and Toch’s Geographical Fugue. (The fugue was a Dadaist work that involved all members of the orchestra speaking the words rather than playing anything, the words being comprised of various – and somewhat humorous – names of countries and cities.) Meow Meow singing Weill’s Surabaya Johnny was a revelation of story-telling, too. (If one ever chances upon a reality television show, with its singing and its judges, you’ll often hear a judge exhorting the value of ‘making a connection’ and ‘telling a story’, and Meow Meow, with her wide and darting eyes, and her prismatic voice, certainly did that.) Her take on Schulhoff’s Sonata Erotica, where she moaned and orgasmed through a series of German words, was utterly hilarious.

What made this concert particularly special, however, was how it was all put together. So often with concerts such as these – where a large number of short pieces are to be played one after the other (as opposed to one on top of the other!) – there are seemingly inevitable slumps in interest, or pieces that sometimes seem like filler. Here, this wasn’t the case. The programming was wildly varied, and the hosting was marvellous. A spectacularly good concert, and one hopes the ACO has something similar in next year’s season.