Abounding in energy and innovation but overall a contrary and inscrutable experience.
David Barmby 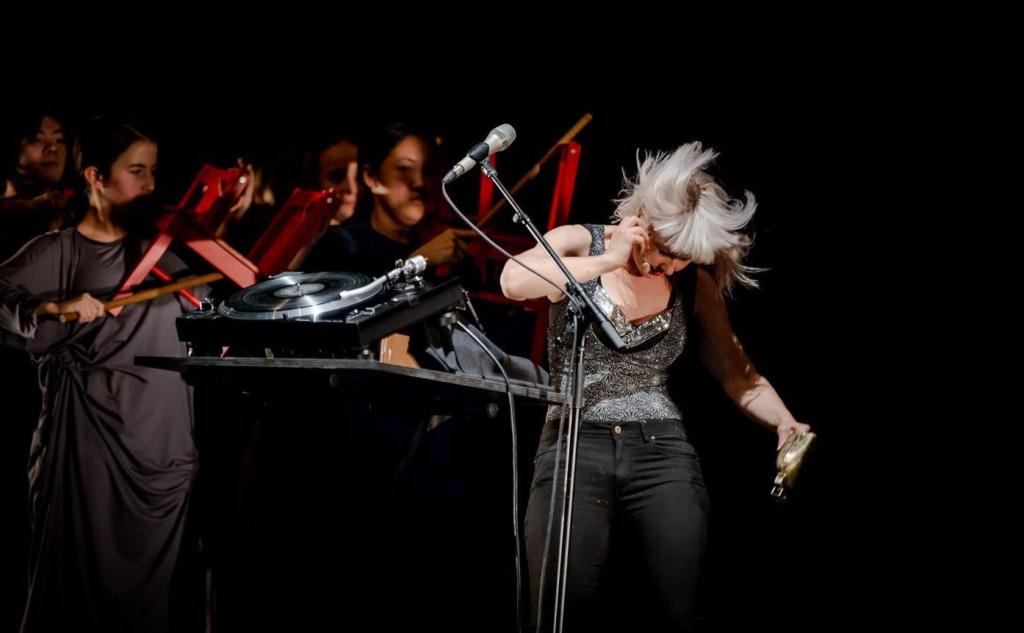 Sydney Festival is to be commended for presenting the brilliant Melbourne-based Speak Percussion performing Liza Lim’s ambitious new percussion chamber opera, Atlas of the Sky. First performed in Melbourne last year, it won Performance of the Year in the APRA/AMCOS Art Music Awards in 2019.

In this strange work, Lim sets poetry of obscure meaning by Eliot Weinberger and contemporary Chinese poet Bei Dao to music. The poets contemplate the meaning of the stars through the ages, and different cultures from religious and symbolic perspectives. A printed program might have provided some guidance to text or indication of duration or artistic statement. Without it, this sole performance as a festival event on Thursday evening in Sydney proved to be an almost totally inscrutable abstract experience.

Some research, however, revealed that this large-scale chamber opera grew from a work for solo woodblock Lim composed for Eugene Ughetti. ‘The idea that the humblest object can reveal a whole cosmos of sound was really the starting point,’ writes Lim. The work starts with the edge of a modest cymbal played on the surface of a revolving turntable. A raft of toy, exotic and hand-crafted percussion instruments are combined into the mix. Some traditional percussion instruments were deployed, though almost never played in a conventional manner. Added to this was a large Semantron, a suspended wooden slab used in Greek and Eastern European Christian Orthodox ritual from the 6th Century. The piccolo woodblock associated with Chinese opera rattled.

Joining the three excellent principal performers of Speak Percussion were 16 members of the community named ‘The Crowd’, dressed in Classical Grecian robes and carefully rehearsed to create a sonic backdrop, sometimes of intricacy and great, if unperceivable subtlety (eg water poured in and out of upturned cow bells). The work was as visually detailed as it was sonic. Staging included 16 miniature chairs for ‘The Crowd’ painted Chinese fire-cracker red. They also became percussion instruments and even balanced like an orchestra of violins ‘bowed’ by wooden sticks, responding directly to the manic movements of soprano Jessica Aszodi as a centrally-placed ‘conductor’.

Aszodi, an artist of rare ability, was outstanding. Her vocal technique included grunts, gasps, whispers and growls as well as almost absurdly virtuosic singing with filigree squeaks and trills adorning her warm ‘straight’ voice. All eyes were on her throughout and her brilliant interaction with the three principal percussionists in fascinating duos through to beguilingly complex larger ensembles centrally co-ordinated by Eugene Ughetti.

The work seemed structured as a sequence of ordered yet improvised chaotic cells, perhaps in reference the universe. One highlight was Matthias Shack-Arnott’s bass drum playing that involved scraping the edge of large cymbals over the drum’s skin surface as well as cracking the edge of the cymbals with a drum stick in intricate rhythmic complexity. This was a spine-tingling display that will endure in the memory. There were, however, less memorable elements. Indeed, weighing in at 60 minutes, the work seemed far longer.

Disappointing was the stoic seriousness of the po-faced performers throughout with a pervading sense of dark and grim impenetrability that seemed strangely alien.