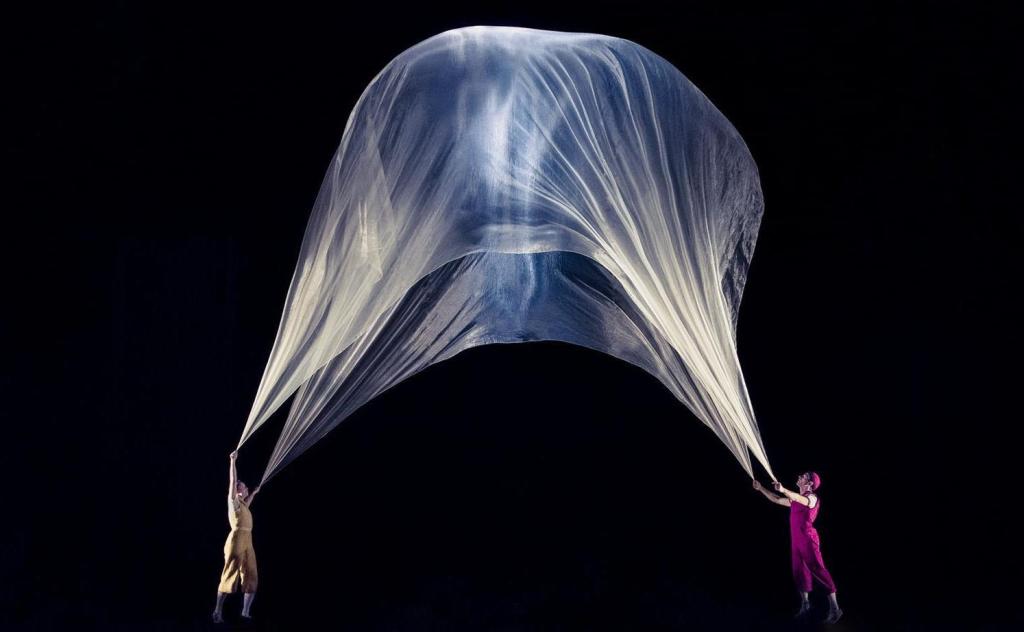 With all the trauma of this summer, Air Play was a lovely respite from, well, life actually.

To be able to simply enjoy oneself, surrounded by giggling children for an hour or so – heaven! Clearly targeted at children, Air Play definitely also has plenty for the young at heart, and this reviewer loved it.

We were also fortunate enough to have a ‘just turned three’-year-old standing in the row behind us (at ear height) providing a running commentary – in case we missed anything!

Audience participation is a significant part of Air Play, and pity the bah humbug who doesn’t take on children’s squeals, interjections and general un-theatre-like behaviour with the joie de vivre with which it is intended.

The premise is simple: there is no storyline per se, but a series of scenarios featuring two performers – New York-based husband and wife duo, Seth Bloom and Christina Gelsone, who collectively known as The Acrobuffos.

The pair interact with each other and the audience utilising balloons of various sizes, umbrellas, glitter, suitcases and auditorium-filling lengths of diaphanous fabric that curl and whirl, courtesy of the inventive use of fans, and even leaf blowers at one point.

Cast your mind back to the stunning plastic bag scene in American Beauty, or the NGV’s collection installation piece Double O by Žilvinas Kempinas (2008), and you have the basic idea.

Set against a pitch-black set, with all these shapes and colours transforming in unexpected ways, the show is, at times, breathtakingly beautiful.

The New York-based couple teamed with air sculptor Daniel Wurtzel to create Air Play, and the clever use of lighting, the simple red and yellow colour palette, unusual but boldly shaped props, pantomime-ish expressions and movement, along with a crisp pace, gives the audience lots to look at, follow and understand.

Given the simplicity of the rest of the show, there is one brief scene that really jarred.

A length of clear plastic film is placed over one character’s face (giving instant flashbacks to unpleasant scenes in gangster movies). He is rescued by the other character, resulting in a disagreement of sorts.

This small act seemed so mismatched with the rest of the beautiful, fun performance. It was possibly introduced to provide tension, but as the show didn’t have an actual storyline, it just had the effect of making every parent cringe, and our little commentator ‘very sad’.

The resulting reconciliation of the characters – restoring their previous naughty-friend personas – was a palpable relief.

The aforementioned scene aside, The Acrobuffos kept up a highly energised and thoroughly entertaining performance. It’s not every day kids get to see a giant balloon gently bouncing through an auditorium, or dads up on stage snagging flying balloons in a giant net.

Highly recommend for kids of any age – we all need a small break from life now and again.