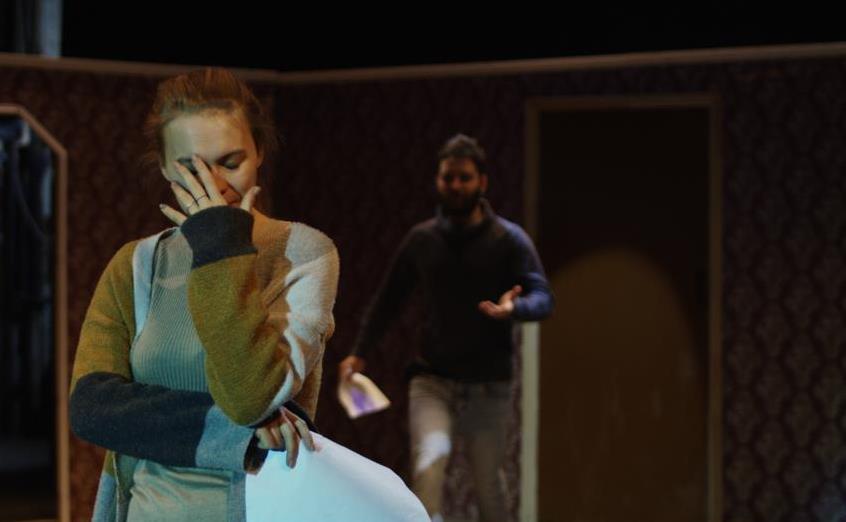 In 2008, I began creating performances about sexual violence. Following the final dress of the first performance in 2008, a member of the ensemble raised his hand and said: ‘I feel like shit.’

He went on to discuss how the show was starting to influence his life outside of the rehearsal space. Other performers shared they had nightmares about being raped or reaching out to help someone in trouble only to see their hands turn to dust.

They were exhibiting signs of secondary trauma stress or vicarious trauma – something that happens when people take on others’ traumatic experiences. As a young twenty-something, I could not believe and that I had created a space for such harm to occur.

Since then, I have continued to create original interdisciplinary performances about sexual violence as well as work centered on shame and hate. I founded a company, Grey Box Collective, with a mission to only create work that tackles tough conversations. In addition to being an artist, I am a health and wellness educator.

My personal process has evolved over the past decade, and in turn, so has the process of my company. I draw upon multiple disciplines to create an optimal rehearsal environment where ensembles feel comfortable taking risks and pushing controversial work to their fullest potential.

1. When dealing with resistance it is best to go around it

I have discovered that separating form and content gives performers a buffer from taking on the story in a secondary trauma type of way. This increases the sustainability of the project.

In 2016, I directed a piece about rape culture titled, It’s Not That Simple. An important component of this performance was illustrating a positive outcome after a negative experience. Several performers in the piece were adamantly opposed to the idea that experiencing sexual violence could ever become a positive event.

The next rehearsal, I asked performers to devise short duets about post-traumatic growth (PTG), which is the idea of gaining greater personal strength through adversity. Once performers were able to physically embody PTG, they were able to create movement and text about a positive change after an experience of sexual violence. 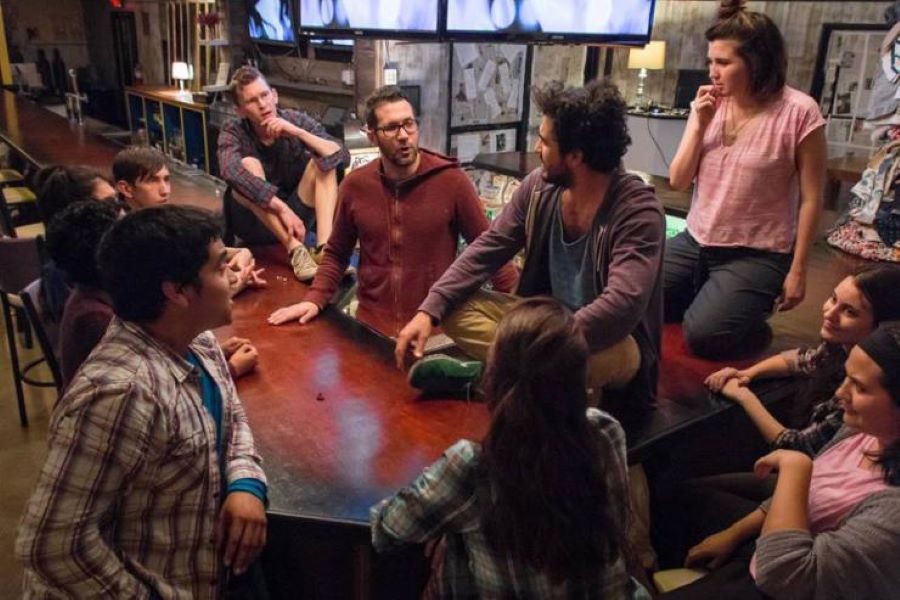 2. Plan a rigid framework, but keep it flexible

This patterned approach relaxes the body by sinking into a predictable structure while simultaneously leaving space for enough variation to keep the individual alert and ready for anything that may happen next. The framework consists of: check-ins, warm-ups (conditioning, grounding, and ensemble building), working the show, and check-outs. The moments that bookend rehearsals are invaluable for directors to assess the tone of the group and reevaluate the needs for the rehearsals to follow.

The answers provided – which are often as small as eating a piece of chocolate or as large as seeing their therapist – give me an indication of my ensemble’s perception of self-care.

In those check-ins and outs, performers are asked to share any stairway thoughts giving them each a guaranteed opportunity to express any need or feeling. One question I often pose is, ‘What have you done to take care of yourself?’ The answers provided – which are often as small as eating a piece of chocolate or as large as seeing their therapist – give me an indication of my ensemble’s perception of self-care. I have found self-care to be an important part of this process as it brings about a high level of accountability within the collective.

The warm-up has the greatest potential in setting up a group for success in being able to be vulnerable with themselves and each other as they take on difficult conversations. The conditioning component focuses on the overall strength of the body with an emphasis on core work.

Immediately following the conditioning component of the warm-up section, performers are guided into at least two grounding techniques. There is space for individual grounding and group grounding. Individual grounding draws upon somatic practices, including breath work, guided imagery, and meditation or mindfulness activities. Group grounding techniques include the pendulum and the waterfall. I observe the group’s body language as they move through these exercises to gain a better understanding of how grounded they feel as opposed to how trusting they are

The final part of the warm-up gives people a chance to play together. It is important for the ensemble to embrace that laughter can happen in a rehearsal where we are focused on serious subjects.

4. Allow some rehearsal techniques into the performance

There are times when it is necessary to create a subtle ritual that can be done on-stage in front of an audience. In 2011, I worked with a woman who experienced regular flashbacks to her personal attack while rehearsing and performing a show about sexual violence. Two strategies that worked for her on stage were to either dig her nails into her hand or squeeze someone else’s hand. We worked it out with ensemble members near her during the performance to understand what was needed and how to work with her throughout the process.

In another show about shame culture titled, Fool Me Once … Fool Me Twice … (FMOFMT), the all-female cast would workout together to online videos marketed for women. The remarks made in these workout videos seeped into the devising process and became one of the more remarkable vignettes in the show by connecting physical exercise with sex techniques.

5. Trust your intuition and listen for feedback

Each ensemble is different. Certain structures stick and others result in settings the group back. Since the 2008 confrontation with the cast, I still see some signs of secondary trauma stress or vicarious trauma taking place throughout the rehearsal process and into the run of the show. I find these indicators reveal themselves in the days leading up to opening, similar to the group 10 years ago.

The difference is that the ensembles have foundational tools to manage these struggles as they come up. Conversations between the cast and audience usually help to mitigate these challenges by creating space for dialogue and hearing how their work on stage is helping someone else. The entire process constructs a supportive net for the ensemble.

The greater the support, the greater challenges they can overcome, and the greater influence the performance will have on audiences to tackle their own tough conversations.

This is an edited version of an article originally published on HowlRound. Read the original article.

Molly W. Schenck is an independent dance-theatre artist and the founding artistic director of Grey Box Collective (GBC). As an independent (and introverted) artist, she takes time to create solo-performances where she can investigate new forms of technologies, tools and expression. When directing for Grey Box Collective, she creates space for dialogue around difficult conversations utilizing a semi-devised approach to dance-theatre for social change. For the past ten years she has focused her creative efforts in staging sexual assault prevention. Additionally, she has performed with Orange Theatre Group, Conder/Dance Breaking Ground Series, Mesa Arts Center, and nue[BOX]. She has earned an MFA in Dance from Arizona State University, and a M. Ed. in Higher Education and a BA in Theatre from the University of Maine. Outside of the arts, she is a yoga instructor, personal trainer, and health and wellness educator. Learn more at www.mollywschenck.com.