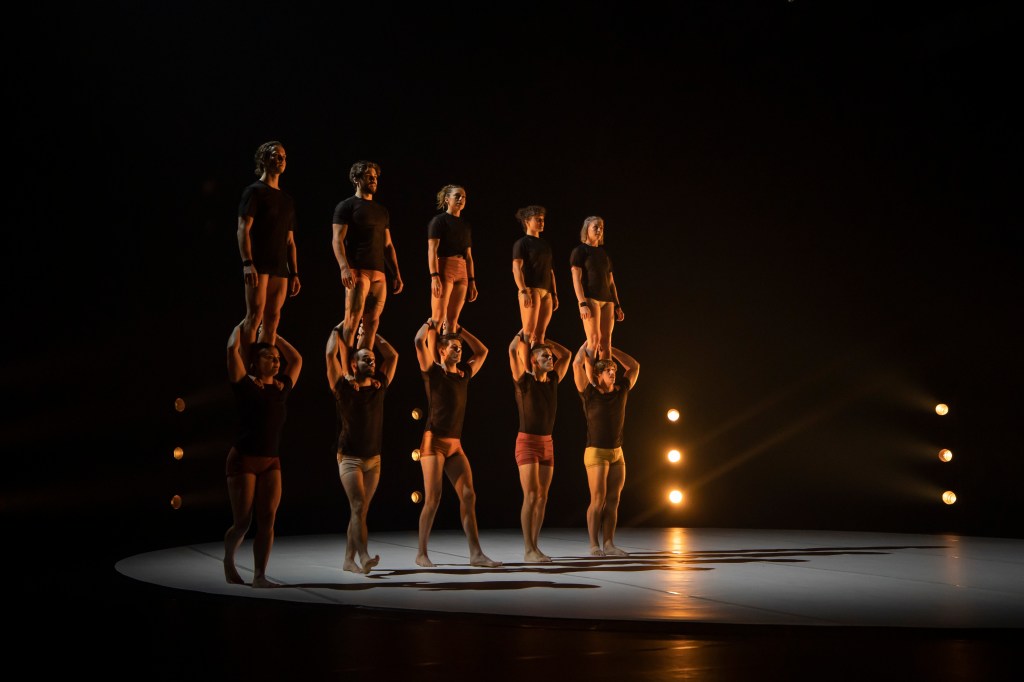 All happy families are alike and, in these times, I think all everyone in the arts are alike: we share one very simple strategic ambition. And I want to credit Bob Sutton for the core idea here.

Today, all strategies in the arts, are, in essence, the same plan. They say  “We prevent disaster turning into catastrophe”.

Disaster is a negative event.

Catastrophe is the damage to or dissolution of our social and cultural bonds as a result of disaster.

We have had the disaster. Now let’s avoid the catastrophe. Let’s go further and dare to dream that we might thrive.

I recently went to Europe, leading the first international tour by a major Australian performing arts company post the events of March 2020. It was and continues to be, a success. So far: three new creations, great audience responses and we have just opened a five-month residency of four in-repertoire works at the incomparable Chameleon Theatre in Berlin.

It was a success apart from the fact that I caught the virus, as did many in our touring company; a major project we were working on tanked badly; everything cost more, took longer, was more complicated and involved having multiple things shoved up your nose; plus and I spent 39 days of 92 away in quarantine.

It took us a year of planning to get prepare including working with a psychologist. She started by asking us what our values were.

My team had some brilliant ones. But I came up a bit short. Most of my values seemed to be: keep going, do stuff, don’t stuff it up.

Survival is not a value. It is a necessity, a precondition to having values.

Ambition without aim is not a value. It is a treadmill.

Love is not a value. It is a superpower.

Digging deeper, I discovered that one of my values is to care.

Here is how I discovered it.

Circus is a particularly dangerous business. We put people in harm’s way and from time to time, things go wrong. Touring is a complex and sometimes dangerous business. Pretty much anything in the arts offers the potential for disaster. Doing anything means being in motion, and in motion you can fall.

That’s because we care. And we take care.

The word ‘care’ has its origins in sickness. It comes from the word for grief, lament, cry. To care is to acknowledge the pain of others. To be in an essential, human relationship with them.

The philosopher Martin Buber says that ‘The world is not comprehensible but it is embraceable’. To embrace the world I think means to care and to act on that care.

We express our profound desire to be connected with others through the embrace.

Perhaps the hardest, most vital thing to embrace is fear.

Fear is our body’s chemical way of telling us we need change.

And out there, at this moment, there’s plenty to fear and plenty to change.

In the theatre our key threats are not each other. We are not our competitors. Rather, they are the sewer of streamed content whose spiritually vacant effluence promises meaning while leaving us with only the grimy smear of entertainment.

‘They died,’ said Karl Kraus, ‘of spiritual famine without feeling spiritual hunger,’ and it’s hard to imagine he wasn’t watching Netflix when he wrote this.

There is no nourishment to be gained from our hours of binge, calibrated and dopamine hacked in the cultural equivalent of an eating disorder.

Netflix’s value proposition is that for $15 a month you can stay in your pyjamas, curl up on the sofa, change shows whenever you want, choose your own adventure, when you want, have no strangers, no babysitters, no overpriced wine and no parking fees. You don’t need to think. You don’t need to work.

Everyone in this room knows that’s not the same as the incandescence of a live experience. But when you consider that Netflix spends 40 times more in a year than the Australia Council, that’s 4000% more, you have some sense of what we are up against.

The arts have to win minds and hearts. We have to enlist, convert, cajole, pressure and engage. We have to stop acting like we are in competition. Otherwise we will lose to the lure of the sofa.

Australian content on TV has declined by 68% in the past two decades. Yet our theatres have never been more full of Australian stories. Our creatives and arts workers have never had greater diversity. Does that mean we are there? Absolutely not. It is a long road to filling our companies and stages with truly diverse and representative stories. But our stages are vastly ahead of our screens.

Let’s also remember while we may argue over nuance, there are people out there, in the wider world, who are orders of magnitude more reactionary and, frankly evil, than anyone in our sector.

There are people who deny climate change, who believe women shouldn’t have rights. People who believe those whose colours aren’t white, whose gender isn’t hetero-normative or whose minds are not neurotypical are not the equal of others. People who say vaccines are the devil’s work. People who right now are passing legislation to remove women’s access to reproductive freedom. These people want to deny others their rights, opportunities and even their lives. It is towards these I want our fury channelled. It is on these our politics and our arts need to be focussed.

Let’s help each other understand our biases, and figure out how to embrace the world.

I am white and male and I appreciate that with the immense privileges I have enjoyed comes the responsibility to use what I have with care, for justice, for the betterment of others. I also appreciate that I cannot fully understand the perspectives of or speak on behalf of anyone else. That there is always more to learn, more to embrace and more to do.

But let us not cower in fear because we might be wrong, make mistakes or fail. Let us not remain silent.

Privilege, entitlement, laziness, inertia, business as usual in the face of a world that is anything but usual are not acceptable responses to the challenges of the moment. Reward those that venture. Allow those who fail because they failed to try, to wither.

What I look for in art is ambush. What we see is often regression towards the commodification, and death by the thousand cuts of Instagram similarity.

I’d like new ways to experience, deliver, distribute our work. Many in the arts did a spectacular job moving to streaming, online classes, remote collaborations and ways of staying connected last year. But the ‘let’s have Zoom or make it live’ dichotomy seems to me to miss the point. We need to be as creative with our mediums and modes of distribution as we are with our art.

To give just one example, when I see the sadly missed Graham Vick’s bold and vigorous work with Birmingham Opera, involving community, embracing diversity, not dumbing down but rather lifting up, I am inspired in a way that using the public dime to retread Andrew Lloyd Webber musicals simply cannot compete with. Relevant art is art that responds to, engages with, grapples with and allows the ultimate possibility of being defeated by the world in all its complexity and contractions.

And at this moment, the world is especially complex.

Cognitive horsepower is no substitute for cognitive dexterity. Being a business does not obviate the need for creativity.

But even so, we can’t do all the heavy lifting alone.

And our sector has carried immense weight.

Australia is a rich nation. Yet we massively, systemically underfund the arts. The Paris Opera Ballet receives more in funding than all the federal grants to all the major arts organisations in Australia put together. We spend 30% less of our GDP on the arts than the OECD average. 30% less. Any policy document that doesn’t begin with ‘after we triple arts funding’ is missing the point, and the opportunity.

The extra funds that all levels of government have generously provided in the face of the current disaster have helped many avoid catastrophe. Let’s make these the new baseline for arts funding going forward.

Sustainability is a good things to keep doing, even after the pandemic.

We are on the precipice. The disruptions of the last year are not even base camp for the Everest we as a species will face over the coming century and beyond.

Art, as Gerhard Richter said, is the highest form of hope.

Hope for a world that doesn’t end in a cinder or with tribes endlessly locked into a Wile E. Coyote and Roadrunner contest: right/left, progressive/conservative, me/you, us /them, win/lose.

Instead, can we find a way to create a narrative that is broader, more encompassing?

The way to stop disaster turning into catastrophe is to strengthen those social and cultural bonds that unite and enmesh us.

To do this we have to be able to imagine a more dimensional existence.

It is to see ourselves as a part of many parts. What philosopher Peter Sloterdijk would call a foam. Or Timothy Morton a hyper-object.

I like to think of it as traffic. We sit in our atomised little cars and swear at the traffic all around us. But we are part of the traffic. The traffic is us.

We are part of the culture. The culture is us.

And if we can see there is no grand plan, no one is in charge, there is no overarching strategy or design, just the interplay of countless individuals, companies, funding agencies and people we can understand that every bit counts.

Viktor Frankel said, ‘What is to emit light must endure burning’.

We have endured the burning. Now it is time to share the light

The light of stories that end differently

The light of new ways to perceiving old disputes

As Tom Stoppard says in Travesties: ‘For every thousand people there’s 900 doing the work, 90 doing well, nine doing good, and one lucky bastard who’s the artist’.

We are those lucky bastards.

Let’s get on with it.

This is an edited version of a keynote address presented at the Australian Performing Arts Exchange 2021.

Yaron Lifschitz is the Artistic Director and CEO of Circa, and was Creative Director of Festival 2018: the arts and cultural program of the 21st Commonwealth Games.