Does money have a taint? That’s the question many in the arts community are asking as the Biennale splits with Transfield.
Ben Eltham
[This is archived content and may not display in the originally intended format.] 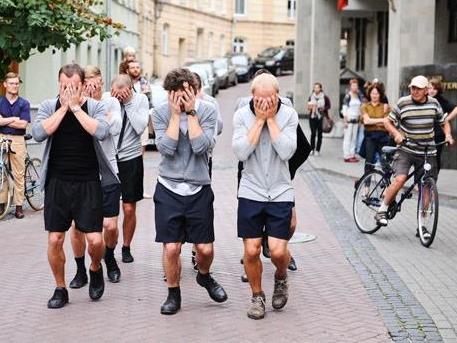 The announcement that Transfield will sever ties with the Biennale of Sydney represents the largest and most public collapse of a sponsorship in the arts sector in recent memory.

After mounting pressure and artist-led boycotts over Transfield Holdings ties with asylum seeker detention centres, the Board of the Biennale received the resignation of its Chairman, Luca Belgiorno-Nettis at the close of business on Friday and with it the decision that Transfield will no longer sponsor  the Biennale.

Since ArtsHub first broke the story of an incipient boycott of the Biennale of Sydney by artists and refugee campaigners angry at Transfield Services’ involvement with Australia’s offshore immigration detention centres, the story has moved quickly.

What began as a blog post quickly gathered momentum. As the campaign snowballed, the Biennale tried unsuccessfully to hose down the scandal, first with dead-bat statements in support of artistic freedom, then by organizing a forum on the issue, and finally with warnings that the Biennale would cease to exist if its major sponsor exited.

For his part, the man at the eye of the storm, Luca Belgiorno-Nettis, alternately pleaded and then remonstrated with boycotting artists, before angrily pulling the plug.

After some congratulatory tweets amongst activists and artists, the backlash rapidly set in. A number of well-informed writers and commentators condemned the campaign, arguing that it achieved little but the withdrawl of much-needed corporate support. Politicians soon followed, with federal Communications Minister Malcolm Turnbull and New South Wales Arts Minister George Souris attacking the boycott.

Turnbull was eloquent in his disdain. ‘There wouldn’t be a Biennale without the Belgiorno-Nettis family,’ he told ABC radio on Monday. ‘Franco, Luca’s father, was one of the great patrons of the arts, a sort of latter day Medici. I think it’s an extraordinary … the sheer vicious ingratitude of it all.’

With the backlash on in earnest, the whole affair has become wildly confused. Were activists right to target a prominent sponsor who, as one columnist argued, was only ‘tangentially’ connected to detention centres on Manus Island? If so, what have they achieved? Is all corporate sponsorship now fair game? And if so, what about government money? After all, as many critics have pointed out, the Australia Council itself is 100 per cent owned and operated by the Federal Government – the executive directly responsible for the policy of mandatory detention.

Can we learn anything from the train wreck?

In fact, we can draw some lessons.

Firstly: money does have a taint. Of course it does: otherwise boycotts of this nature wouldn’t work. In fact, they succeed surprisingly often. Activists have chalked up many wins over the years in campaigns against activities funded from tobacco, alcohol, gambling, armaments and other unpopular industries. We no longer let tobacco companies fund sport. We may soon see gambling companies restricted from advertising in the same way.

Secondly: boycotts can be successful. Many protests have begun in modest ways, only to eventually change the minds of millions and the policies of nations. The green bans of trade unions in Sydney in the 1970s, which were criticised at the time for being unrepresentative and unrealistic, ultimately protected important parts of inner Sydney’s heritage. Protests and boycotts against the Tasmanian timber industry in the 1990s and 2000s – including by artists and writers boycotting the Ten Days on the Island festival – at first seemed to achieve little. But, in time, they directly contributed to the collapse of the Tasmanian export woodchip industry.

In this case, while the protests against Transfield Holdings may seem hypocritical, they have clearly convinced enough people in the arts and the general community that they have begun to affect the Biennale’s reputation. The very fact that Belgiorno-Nettis has withdrawn in such high profile circumstances can only be seen as a win for the protestors. Their aim was to draw attention – including international attention – to Australia’s increasingly punitive immigration policies. In that respect, a major disruption to one of Australia’s largest cultural events, including the scalp of the chairman, surely can be considered a tactical victory.

Another thing we’ve learned: for all their claims to free expression, arts organisations handle politics poorly. This has been evident a number of times already in recent months, for instance in the bizarre case of the Queensland Theatre Company’s self-censorship issues. Arts managers are used to dealing with friendly audiences and a largely supportive arts media. Unhappy punters and a hostile political media aren’t encountered as often. Prominent arts leaders, such as the Biennale’s Juliana Engberg, are powerful in their chosen domains. They aren’t always used to having their actions put under the microscope. Engberg and the Biennale’s management have struggled in the current crisis.

For that matter, Belgiorno-Nettis has done himself few favours in the manner of his resignation. His resignation statement, and subsequent interview with Radio National, betrayed an understandable sense of frustration at those seeking to attack his generosity. But there was also a sense that he was taking his bat and ball and going home. There is a strange inconsistency to Belgiorno-Nettis’ insistence that ‘there would appear to be little room for sensible dialogue, let alone deliberation’, and his snap decision to resign as the Chairman. The end result appears to be that Belgiorno-Nettis will maintain his stake in Transfield Services, the manager of Manus Island, while ending his association with the Sydney Biennale. What does that suggest about where his true priorities lie?

Critics of the boycott have made sound points too. In the neoliberal environment of modern global capitalism, rare is the sponsor untainted by exploitation. The University of Western Sydney’s James Arvanitakis made the point well in his recent article in The Conversation.  ‘The problem is that it is never ‘clean’ money: BHP Billiton sponsors Bell Shakespeare; the Belvoir’s partners include alcohol companies. There are links between the National Gallery of Victoria and the Chinese Chamber of Commerce (the founding member of the Chinese Chamber of Commerce is a trustee) – uncomfortable for those supporting Tibet.’

Does this mean that the protestors have somehow been irresponsible? Or that their campaign, which will obviously not convince the Abbott government to change its hardline policies, is ill conceived? I think not. What is shows is that arts organisations need to think harder about their sponsorship activities.

What it shows is that arts organisations need to think harder about their sponsorship activities.

Sponsorship is riskier than it used to be, because activists and campaigners are becoming increasingly sophisticated in their tactics. Arts organisations are in the business of selling symbolic capital. And yet, for people who deal in symbols on a daily business, they sometimes show a surprising level of naiveté about the political implications of accepting the corporate coin. Think about it: what are sponsors buying, if not – on some level – absolution for their corporate sins?

Tacitly, cultural organisations have been engaging in corporate image laundering for a long time. Sponsoring the arts represents a positive symbolic investment that enables corporations, many of which are engaged in controversial or unpopular activities, to burnish their public image and present themselves as ‘good corporate citizens’. It should surprise no-one when artists and publics question that bargain. Not everyone wants their art subsidised by corporate greed or human misery, and it’s not ungrateful to say so.

For this reason, the various claims of hypocrisy against those enjoying public arts funding while rejecting corporate sponsorship don’t hold water. All governments pursue policies we both agree and disagree with. We don’t boycott public hospitals because we dislike defence spending. We don’t attack people for getting the dole just because the government locks up asylum seekers. In a democracy, we understand that public policy is a complex and multi-faceted thing, the outcome of the push and pull of democratic processes.

Similarly, concerns that the departure of Belgiorno-Nettis will herald a broader downturn in cultural sponsorship are overblown. The arts retain their symbolic power. Corporations still need a social license to operate.

It shouldn’t need to be said, but corporate sponsorship is inherently different to public funding of the arts. Public support for the arts (like offshore detention centres) is the bipartisan policy of the two major parties. In other words, it is the result of some kind of democratic will. Corporate sponsorship, on the other hand, is not just art for art’s sake. It is commonly a finely measured financial exchange: money for reputation.

Some things can be true all at once. It is possible to simultaneously regret the departure of a major patron of the arts, applaud the actions of artists standing up for their beliefs, and campaign for the release of innocent people detained without trial in detention centres in Manus Island – a number of whom, as we now know, are artists themselves.