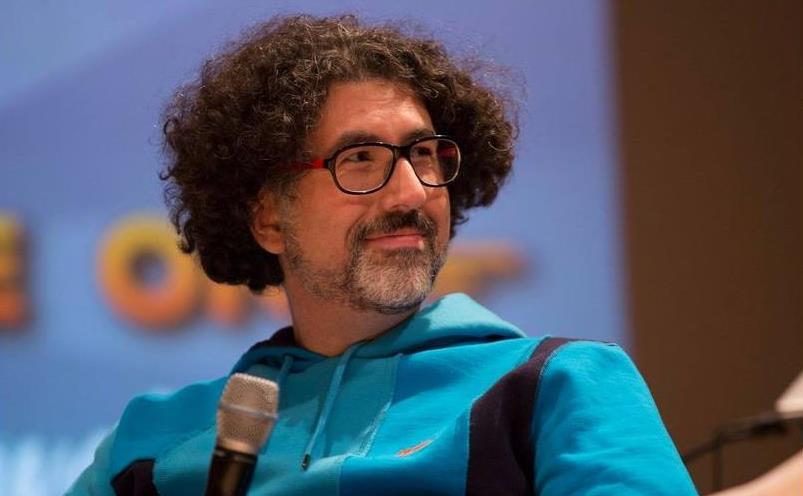 Hrag Vartanian will talk about why the future can’t come fast enough at the Visions 2020 Keynote. Image via Facebook.

When asked what the future looks like for the arts, Hrag Vartanian does not mince his words: ‘I am strangely optimistic; I see a bit of the deadwood cut out, which is not so bad.’ While 2020 has delivered good and bad, Hrag believes it has also brought long overdue systemic change.

‘Change does happen, but I am getting pretty impatient. It has to happen faster,’ he said.

Change started in 2009 when Hrag Vartanian and husband/publisher Veken Gueyikian had a harebrained idea: to start an online arts publication that would disrupt the art world. Their vision was that it would be radical, playful – and yes, a place for serious ethical and political conversations needed within the arts community.

Since then Hyperallergic has become one of the most important voices in the US arts scene with over one million visitors monthly. Art critic Mary-Louise Schumacher described it as having, ‘risen to rival the arts journalism of legacy media’, listing it alongside The New Yorker, the Los Angeles Times and Artforum in the Neiman Reports at Harvard University (the who’s who list of American journalism).

Funded largely from their own pockets (and Gueyikian’s new approach to arts advertising), today Hyperallergic has hundreds of global contributors and a staff of twelve working out of a former factory in Brooklyn… well, until a certain pandemic hit.

ArtsHub caught up with Vartanian ahead of his Keynote presentation for the Visions 2020 conference on 9 December.

Read: Visions 2020 full program sets sights on the future of the arts

In a year when Black Lives Matters (BLM) protests rattled a nation and ricocheted globally; when nearly 13 million people have contracted COVID-19 in America with a President who claims he is immune … to everything it seems, even conceding, Vartanian brings his political swagger to Australian audiences, finding optimism in the realities that lay ahead of us all.

‘There are certain qualities in the arts community that we have, and that make us better suited for some of these issues. I think the question of “What is truth?”, and playing with that, has been at the core of art for a while, so we are very familiar with the idea. But what it is doing now, is challenging even the arts community because we are used to a more stable version of truth.

‘And now that we are so in flux, it’s really challenging us to be a little more flexible in the ways we look at these issues,’ Vartanian continued.

He said the real awakening that 2020 delivered was that ‘not everyone shares the same values anymore, which is a big disconnect that we weren’t expecting. That is a reality we saw recently in the US when a vigilante shot a BLM protester in Wisconsin and part of the country was thinking he did the right thing and should run for government, and the other part of the country was disgusted.’

He finds an optimism in that the arts community is a ‘still a very scrappy scene’, and in the way that it can be flexible and not as dominated by major corporations.

He used the comparison of the music industry. ‘You don’t all of a sudden give this unknown voice a big platform; they have to earn it. In a way, in the art community, we can do that … artists can still create projects with small teams and curators can still take chances on things.’

Vartanian sees the greatest challenge facing the arts sector is that ‘some of the elites of our community don’t like to see change, because change in the current scenario means redistribution of power, and people don’t want to give up power.

‘It is not a coincidence that artists are involved in so many of these social justice movements at a very core and foundational level,’ he added.

‘It is sad that a pandemic has forced the issue, but I also don’t know – having carried these issues for so long and had incremental progress – I actually don’t know how else we could have done it,’ concluded Vartanian.

A KEYNOTE FOR OPTIMISM

‘Before the pandemic, there were many things about the art scene that were really frustrating, pushing artists and curators and writers into a very unequal system, that was just becoming more unequal.’

He said there was a kind of incremental pivot point for 2020, when the arts community was witness to elite galleries and institutions that sell multi-million dollar art works putting their hand up for Federal Paycheck Protection Program (PPP) loans (a loan-based scheme that serves a similar role to Australia’s JobKeeper in maintaining work in the changing economy).

‘It opened people’s eyes up, that there are some foundational elements in our [arts] community that we have to deal with. And through the actions of unions at some of the big US Museums, we have seen a big rush of activity during the pandemic [over workers’ rights]. It is amazing to me that it took so long.’

‘So now that those conversations of equity, social justice and diversity are coming in, we have realised there are structural issues why these [problems] exist in our community, things we would consider quote-on quote normal in the past, like no maternity leave.’

‘A Museum can’t pay a security guard as a full time salary member, and rather pays them really low, and yet they can buy a million dollar artwork. People are wondering where are the values?’

Where this connects with Australia is in conversation about the compositions of arts Boards, their social accountability and diversity.

‘Ten years ago, if we were having this conversation and questioned, “Well there’s an arms dealer on the Board”, honestly they would be like, “Hasn’t there always been?” We are tired of the laissez–faire attitude.’

He continued: ‘People were like, “I’m not paid properly” to face the answer, “But you are doing what you love”. That is the most patronising thing. It is still a job that has requirements and should have safeguards and people should be treated with respect.’

‘About seven years ago, I wrote a piece about unpaid internships. Initially people were like “That has always been like that”, but now it is considered really negative to have an unpaid internship, and people are asking, “Why is this unpaid?” That wouldn’t have happened 10 years ago.’

‘This is what we are seeing right now. This is the optimism that is happening – people are addressing this in a way they never had before,’ Vartanian told ArtsHub.

Get your tickets for Visions 2020 and learn more about the program.