With this new arts site in inner Melbourne, Marcus Westbury promises a flexible space that will hold its value.
Richard Watts 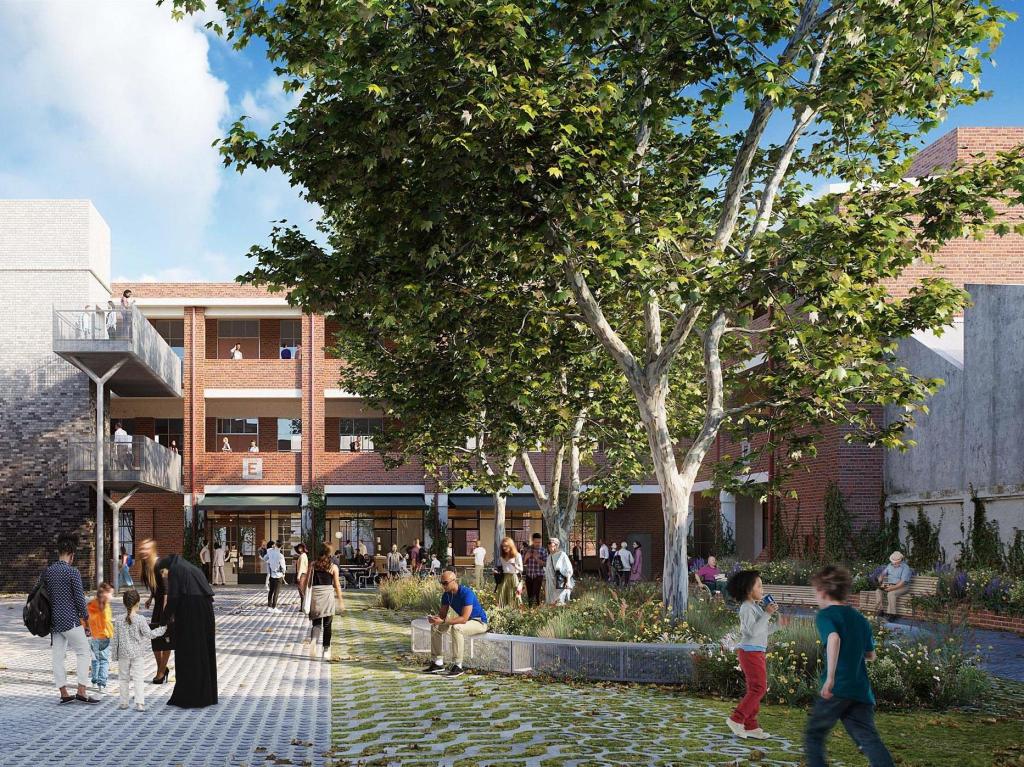 Flexibility and accessibility are central to the programming at Collingwood Arts Precinct (CAP), which recently announced the latest tenants for its still-in-development site in inner city Melbourne.

A former TAFE college, the new precinct is designed to a permanent home for the arts but also as a welcoming space for the wider Collingwood community.

CAP CEO Marcus Westbury explained: ‘Part of the process has been about asking: how do we open it up to the neighbourhood, how do we make it welcoming and not intimidating to all the diversity of communities that are in Collingwood?

‘There’s a gorgeous, formal Art Deco entrance on the Johnson Street side of the site, which is fantastic, but it’s not necessarily a welcoming edifice to a whole bunch of people … so we’ve very consciously created a sort of “off laneway” entrance [on the Perry Street side of the precinct] and we’re also creating a very visible, big public entrance on the Johnson Street side that really allows people to see right into the heart of the site – you can see into the courtyard from the street, you can see the trees and the greenery,’ he said.

The new entrance is being created by punching through an existing wall in order to open up a new thoroughfare into the heart of the CAP.

‘Suddenly realising that the first floor of our major building – despite not having a door – actually opened straight onto our courtyard and also straight onto the street on the Johnson Street side, was quite a key to unpacking how the whole site works. By creating a new entrance at this one point, people can walk straight into the courtyard – we take a whole big area on the side that once would have been difficult to get to and make it right in your face as you come in and out and that really changes the mix of uses,’ Westbury explained.

The courtyard is envisaged as the heart of the precinct, and will be widely accessible for the local community as well as for resident artists and organisations.

‘We want people to be able to come here without feeling that they have to be invited or be part of the right “scene”,’ Westbury said.

WHO’S IN THE MIX?

The Social Studio (a not-for-profit fashion school, clothing label, retail store, clothing manufacturer and community space supporting young people from migrant and refugee backgrounds) will also be moving into the precinct when it opens.

More than 60% of the lettable area has been now been allocated to prospective tenants who will be announced throughout this year. The remaining areas are being are being held back so that individuals and smaller organisations will have an opportunity to apply for spaces, including more heavily subsidised spaces, closer to the opening date.

‘I can’t say exactly when [that will be] but shortly before opening,’ said Westbury. ‘And some of the smaller office and work spaces too, so as to be able to make sure that we’ve got artists and organisations who aren’t the ones who plan a year, two years ahead as part of the mix.’

These smaller spaces are designed to be flexible and with an eye to the future, as part of CAP’s long-term plans for the site.

‘The idea has been to create spaces that are really robust, really adaptable, so you can combine them, you can merge them over 10-20 years. So we’ve put in lots of artists’ studios – they can be very small studios, they can be combined into larger studios, and I suspect over the life-cycles of those studios some will change size three, four, five times.’

Similarly, the office spaces have been designed to be future-ready and to help facilitate conversation and collaboration.

Above, a render of the proposed CAP entrance courtesy KALEIDO, Fieldwork architects and Simone Bliss Landscape Architecture and below, the new entrance under construction. Photo credit: David Smiley.

ArtsHub first reported on plans for the Collingwood Arts Precinct in May 2013, and has followed the redevelopment of the site with interest.

In a 2016 interview, Westbury told ArtsHub he anticipated the precinct would be open by late 2018. That date has since been revised.

‘The main construction works are now due to finish around the end of this year and hopefully, in a best case scenario, we’d be able to sneak preview some people through this side of Christmas. More realistically it will be the first quarter of next year before we open,’ he said.

Delays to the opening date were caused in part by having the entire site re-zoned, Westbury explained.

‘For various reasons – I won’t go into them – we decided that we would prioritise getting the site re-zoned before logging our planning applications, and re-zoning doesn’t happen quickly.  So that was a fairly significant delay but what it means now is that this entire site is zoned as an arts and cultural precinct – it’s a special zone that’s been created for that purpose, which means that the whole site is, under the planning scheme, a place of entertainment.

‘We can do outdoor events, we can do activities, we can do music, we can make noise and do stuff that you could not normally do in a standard inner-city block and I think that’s really important for future-proofing but I think it probably added 12 months to the timeline, because that’s how long that process took,’ he said.

But with the re-zoning secured, Westbury and the CAP Board have been able to think about the site’s future in the long term.

‘What we’re doing here is theoretically for ever. This site is now zoned as an arts precinct; it’s held effectively in trust by our organisation, and we are responsible for making sure that it’s an arts space in perpetuity.’

‘We are responsible for making sure that it’s an arts space in perpetuity.’

Future-proofing the site has also been reflected in the development of studios, office spaces and entertainment areas within the precinct’s existing structures.

‘One of the things that I’ve been conscious of in the planning is we’re trying to make sure there’s a mix of short, medium and longer-term tenants. Some of the organisations that are here, it’s really important that they have long-term security; for others, less so, but in terms of the dynamic of the site, of the community here, it’s got to have some capacity to refresh and evolve over time,’ Westbury told ArtsHub.

‘I don’t want to create a situation where we lock in 2018’s idea of what a cultural mix is and then wake up in 2028 and it hasn’t changed or grown at all. So a few of the things that are going to be coming in are relatively short-term just to see how they work; most of them are here for two to six years at least but there’s a capacity to manage them – and I expect to learn a little more about what works once we start opening.

‘You don’t want to make all your decisions and lock them in in advance,’ he added.

Once complete, the site will include a mix of individual artists, arts organisations, and commercial cultural organisations, in addition to bars and cafés.

‘We’re targeting an average of 70% of market rent across the site which probably means in practice that you have some more commercial creative activities or hospitality, those sorts of uses, which are also part of making the place work. Because they in turn allow us to cross-subsidise, making this place more affordable for emerging artists and smaller organisations that don’t have the bigger budgets.’

A live performance space on the site will be operated by one of the key tenants, further reducing CAP’s operating costs by eliminating the need to employ a venue manager to coordinate bookings.

‘Part of that is to minimise our operating costs, and given our model that also flows through to minimising how much we need to charge, so it’s not just about us,’ said Westbury, before adding that the decision also reflects the overall philosophy of the site.

‘Anyone who knows projects I’ve worked on previously and the background I’ve come from will know that I’m not trying to create a grand edifice or a single institution. It’s always been this idea of being a collection of organisations and entities that have their own identity and passion, and their own communities that come with them. And then the more we can support them, the stronger we’ll be – and that’s been the philosophy from the beginning,’ he said.

‘I’m not trying to create a grand edifice or a single institution. It’s always been this idea of being a collection of organisations.’

‘The idea should be that it feels like a cluster of organisations and artists and whatever that each have their own really strong identity and sense of ownership around the place, rather than that effect that you sometimes get where – as you bring lots of smaller organisations together – that they lose their identity in the process … Really, I’d like it if you came here and you saw PBS, you’d see Music Victoria, The Push, Bus Projects, West Space – you’ll see the organisations that are here before you see this monolithic thing that is CAP.’

Determining the right mix of tenants the space also means finding ways that artists and organisations can co-exist and work together efficiently.

‘On a really basic level, one of the exercises we went through early in the process was thinking, “Wouldn’t it be great that if someone wants to borrow a tool, that there’s an easy way of asking everyone else here, hey, who’s got a drill?” So we’re trying to think on a cultural level, about professional development and some of it is just practical – we just want people to be able to help each other get stuff done. And our role is to assist that and to enable that but also our role gets easier the more that they have the capacity to help each other as well.

‘We want to give all of the tenants a sense of ownership and control of their own identity, their own spaces, within a whole where our job is mainly to make sure they don’t trip over each other,’ Westbury concluded.