A German cartoonist’s account of life in an Australian WWI internment camp is being claimed as the world’s first-known autobiographical graphic novel.
Richard Watts 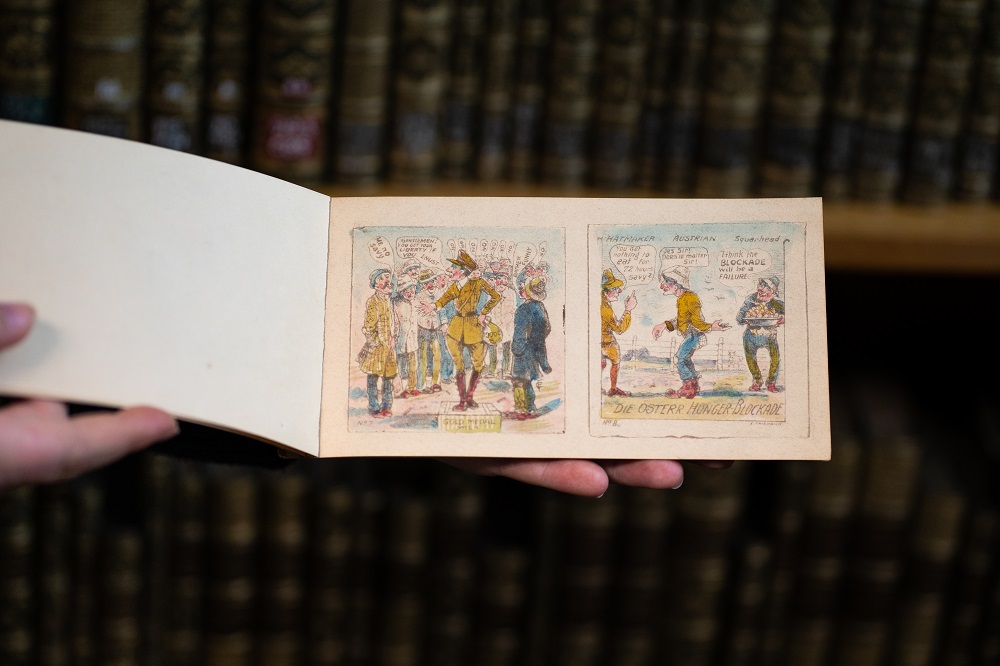 Traditionally, it’s believed that ‘graphic novels’ are a relatively recent phenomenon, with American cartoonist Will Eisner’s 1978 book A Contract with God, and Other Tenement Stories generally acclaimed as the first of the genre.

However, the previously unknown Voyage and Adventures of a Good Little German in Kangarooland, a five-part autobiographical graphic novel dating from 1916-1919 and recently donated to the University of Adelaide Library’s Special Collections, might just rewrite the history books.

For comic book aficionados, the term ‘graphic novel’ is sometimes dismissed as a marketing term – a way of making seemingly low-brow comic books (which came into existence in the early 1900s, initially as collections of newspaper comic strips) more palatable and acceptable to a wider readership.

Others would argue that graphic novels have evolved into a distinct and sophisticated artform, a unique combination of text and sequential visual narrative capable of rich and compelling expression – typified by works such as Art Spiegelman’s Maus (1980), Alison Bechdel’s Fun Home: A Family Tragicomic (2006).

Australian equivalents include Mandy Ord’s Stella Prize longlisted When One Person Dies the Whole World is Over (2019), Pat Grant’s The Grot (2020) and the NSW Premier’s Literary Award-award-winning Book of the Year, Still Alive: Notes from Australia’s Immigration Detention System by Safdar Ahmed (2021).

Now, researchers at the University of Adelaide believe they may have discovered (or rediscovered) the world’s earliest autobiographical graphic novel.

Voyage and Adventures of a Good Little German in Kangarooland

Drawn by C. Friedrich, a previously unknown German cartoonist while he was detained between 1916 and 1919 in an Australian internment camp, the rare publications are held in the University Library’s Special Collections.

Voyage and Adventures of a Good Little German in Kangarooland was donated by a University alumna, and has been extensively studied by Dr Aaron Humphrey, Lecturer in Media and Digital Humanities, and Dr Simon Walsh, Lecturer in German Studies, from the School of Humanities at University of Adelaide.

‘Voyage and Adventures of a Good Little German in Kangarooland, features an autobiographical character who begins a new life in Australia. Upon arrival he is suspected of being a spy during World War I and is sent to the Holsworthy internment camp in Liverpool, New South Wales, the same camp where Friedrich was detained,’ said Humphrey.

‘While autobiographical graphic novels have become a very popular literary genre during the 21st century, their history is generally assumed to begin with underground comix – small press or self-published comic books – in the 1970s. This discovery, from nearly half a century earlier, calls that history into question.

‘We believe this collection of autobiographical cartoons could be the first of its kind: perhaps the earliest known example of what we would today call an autobiographical graphic novel,’ he said.

Humphrey is presenting his and Walsh’s research at the 2022 Comic-Con International in San Diego, which runs from Thursday 21 to Sunday 24 July.

The comics paint a portrait of life and struggles in the camp. The University’s experts say this subject matter is still relevant today.

Walsh said: ‘Friedrich’s stories emphasise the struggles of detainees, and points to the human and emotional cost of borders. Differences in language and national identities are not insurmountable. Instead, it is the fences, bayonets and draconian systems of detention that are enacted without due cause, which separate people from each other and their shared humanity.

‘This is a remarkable document of the German-Australian experience during World War I, a significant part of Australia’s cultural heritage, and holds international importance as an early example of one of the great literary innovations of the 20th century.’

Whether Friedrich’s comics are graphic novels or not, a topic that is sure to be discussed at length in the coming weeks and months, their discovery is certainly an important addition to the artform’s history in Australia.

As Melbourne-based comic book artist, publisher and critic Bernard Caleo told ArtsHub: ‘This is a significant discovery which fits into the cartooning tradition in Australia (think Melbourne Punch from 1855 and Sydney’s The Bulletin, from 1880) but expands it considerably because of the personal, rather than satirical or humorous use to which the books’ mix of words and pictures are devoted.

‘Indeed it’s not until the 1970s undergrounds (think American Justin Green’s Binky Brown Meets the Holy Virgin Mary, 1972) that the idea of using the language of cartooning to bare your soul reaches a bigger audience, which leads to Art Speigelman’s Maus (1986).

‘And though I must acknowledge that I am the one of the publishers of the book, Safdar Ahmed’s graphic novel Still Alive (Twelve Panels Press, 2021), combining as it does autobiography with tales of incarceration in Australia, in this case of asylum seekers, can now be seen as part of an Australian journalistic cartooning tradition stretching back over a hundred years,’ Caleo said.

Read: The many Australias in our graphic novels

C. Friedrich has since passed into obscurity, and it’s unknown if this was his real name or a pseudonym.

Despite this, his work lives on in the University Library’s Special Collections, thanks to a recent donation from University of Adelaide alumna Sally Goers Fox on behalf of the Goers family.

As Goers Fox  explained: ‘The comics were brought back from the internment camp by my great uncle, Hermann Carl “Charlie” Goers, the wartime editor of a local Barossa Valley newspaper, who was imprisoned alongside Friedrich due to his German origins, despite being born in Australia.

‘I donated the comics to the University of Adelaide to ensure that the history of the camps, and the experiences of the prisoners, are remembered. It is appropriate that the comics be kept in the University’s Library where they will be read, researched, and appreciated for years to come.’

Her donation, consisting of five small books, is the only full collection of all five of Friedrich’s books known to exist.

The University Library’s Special Collections have digitalised the five books, which are accessible via Adelaide Connect. Adelaide Connect is open access to historical resources, making these books available to anyone, anywhere in the world.