Australia’s most influential circus company? The Fruities at 40

Based in the regional NSW city of Albury, the Flying Fruit Fly Circus has become a remarkable Australian success story.
Richard Watts 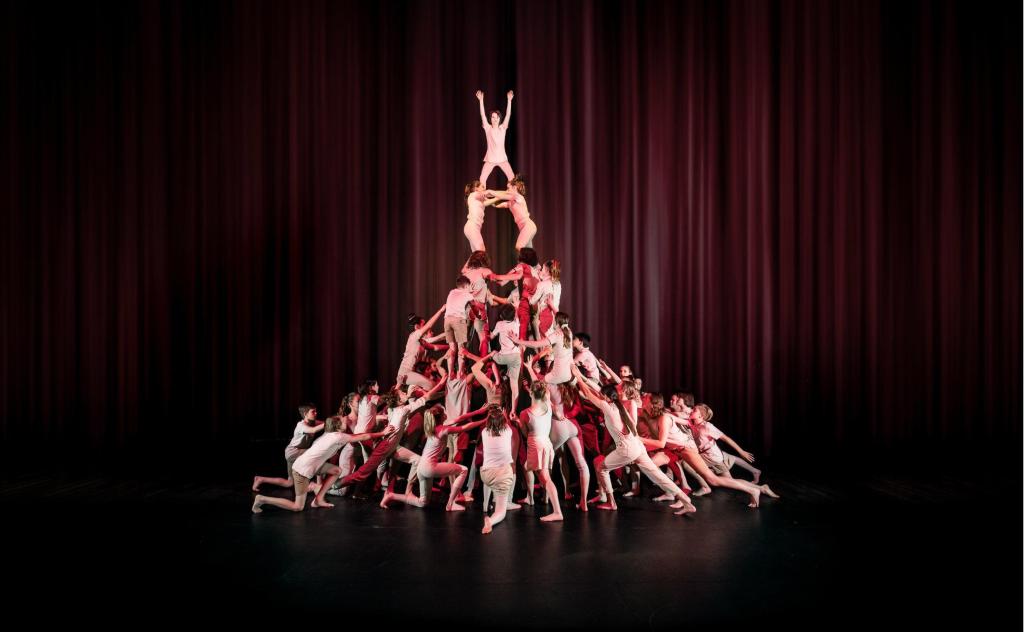 Born out of a school holiday program run by the enterprising Murray River Performing Group in 1979, the Flying Fruit Fly Circus – ‘the Fruities’ to their friends – was never intended to be a long-term project, let alone a well-established and respected circus school whose graduates now perform around the world.

Having evolved into one of the world’s leading youth arts companies, today the Fruities are a celebrated producer of contemporary youth circus and a national centre of arts training excellence based in Albury, in regional NSW.

Given the number of young people who pass through the company’s doors each year, the Fruities’ impact on the sector is significant – indeed, it could be argued that the Flying Fruit Fly Circus has become one of the most important circus companies in Australia.

‘Audiences’ and programmers’ appetite for circus has been insatiable in recent years, which can be attributed in part to a critical mass of talented performers who’ve come through. NICA’s Bachelor of Circus Arts program recruits from the best young performers, and some of our most celebrated graduates and our most promising current students have come to us through our friends, “the Fruities”,’ she said.

‘The professionalism, sense of fun and artistry, and above all, the world-class skills instilled in children, even in primary age, in Albury has undoubtedly shaped our flourishing culture of circus in Australia,’ Stephens added.

‘The Flying Fruit Fly Circus helps generate momentum in our sector. They channel young people’s love of circus into career pathways, captivating productions and showcase opportunities through their quality training programs. As a result their impact radiates from Albury into circus companies throughout Australia and worldwide. Fruities’ alumni are everywhere, and they continue to form a vital part of our sector’s ecology,’ Miles said. 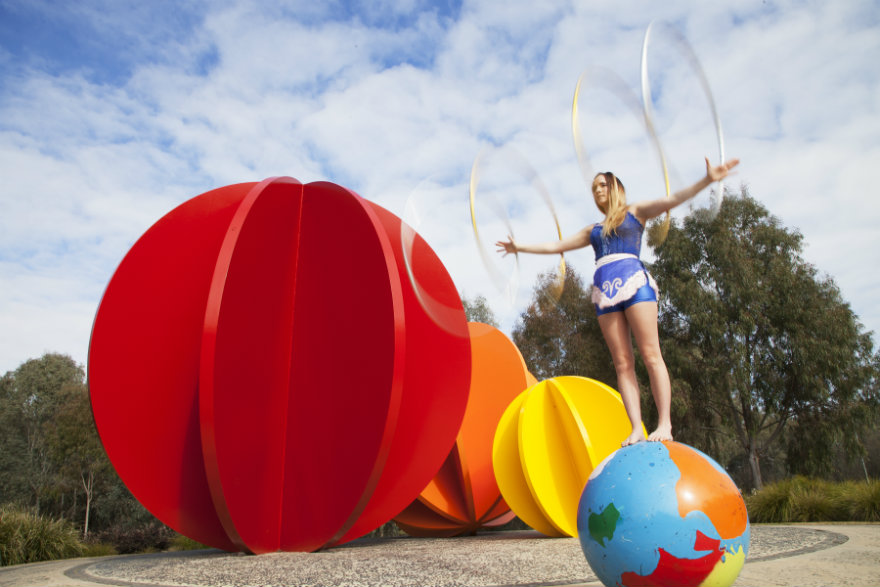 Given the number of artists to graduate from the Flying Fruit Fly Circus over its 40 years to date, it’s little wonder the company has had such an influence on the Australian circus landscape, Fruities’ CEO, Richard Hull, explained.

‘Casus is a really great example of two Fruit Flies’ graduates who got together to create that company and all the amazing work that that’s doing. I see a number of graduates over 40 years who have contributed to the circus sector and landscape, but also I think it’s important to remember the influence the company has had in how contemporary circus has developed and how innovation has been sparked here in Albury through those landmark projects with the Nanjing Acrobats and with Russian circus. Really, without the Fruit Flies, contemporary circus in Australia would look very different,’ Hull said.

In December, the Fly Fruit Fly Circus celebrates its 40th anniversary with the fifth annual Borderville Circus Festival – but what is the secret of their success?

‘If there’s a secret to the success of the company, I would say it’s its spirit, its community, and I think its commitment to purpose,’ Hull told ArtsHub.

‘The company’s always had a very clear sense of what it is, who it is, and what it’s here for. And it’s a simple brief really – to teach kids how to do circus and put on shows. That was the original concept in 1979, and that’s what we still do, and that’s what we’ll be doing for the 40th anniversary.’

The Fruit Flies’ position as a nationally respected circus school is also due to the elevation of circus arts over the 40 years since the very first Fruities show was held in a pink and white striped tent in Hovell Park, Albury.

‘The rise of Cirque du Soleil internationally and the embedding of circus as an art form in France, for example, has been really meant that it becomes a career choice,  a credible career choice for kids,’ said Artistic Director Anni Davey.

The Fruities’ success is also due in part to its isolation, she continued, as well as because of an endlessly renewing resource: the young people of Australia.

‘We’re in the middle of the country and we truck along doing what we do, and sometimes things like the huge upheavals in the funding landscape … or more particularly, huge upheavals in the artistic landscape, pass us by. The Fruities have been up and down, of course, but what we also have is a really strong partnership with schools. We have secondary students coming through all the time. So we are always regenerating our pool of talent as a part of what we do, and circus is so much a part of what we do that it’s become a part of this community too,’ Davey said.

Albury, population 52,000, is an important base of operations for the Fruities and the company has had a lasting impact on the city, according to Hull, although describing exactly how the company has contributed to the Albury community is harder to quantify, Hull continued.

‘That’s because you can’t compare it with the alternative. What would Albury be like without us? But the community has also been at the heart of this organisation. There is a quote that says that The Flying Fruit Fly Circus is Australia’s most successful community cultural development project and I think that’s right, you know? It was always about community. The community have benefited from the Fruit Flies being here but also the Fruit Flies, I think, still only exist because when the chips are down and the times are hard, the community has always rallied around to pick the company up and make sure that it continues,’ he said.

‘Circus is so much a part of what we do that it’s become a part of this community too.’

The ongoing presence of the Flying Fruit Flies Circus School, and the more recreational circus programs run by the Fruities have had a lasting effect on the local population.

Davey explained: ‘Our main program caters for about 75 kids and a lot of them are from interstate. I don’t think there’s any from overseas at the moment. But … kids living in Albury and Wodonga already have an advantage in terms of aspiring to a circus career. And that’s a really important thing for a regional city in the centre of Australia.

‘It’s unlikely but it’s very true, that for the last 40 years a kid from Albury-Wodonga is more likely to become a professional circus artist – and a very good one – than a kid from, say, Armadale or Yass,’ she said.

Now in its fifth year, the annual circus festival Borderville represents an important opportunity to celebrate the promise represented by the current crop of young circus artists who train every week in the company’s facilities, as well as the Fruities’ 40 years to date.

With former Fruities working throughout Australia – including in the ensembles of Circa, Casus, Circus Oz and Gravity and Other Myths – as well as internationally with the likes of Cirque Du Soleil and The 7 Fingers (Les 7 doigts de la main) the festival represents a rare opportunity to unite some of the company’s many alumni in the one-off event Fruities at 40! (featuring four decades of Flying Fruit Flies’ performers).

‘Really, without the Fruit Flies, contemporary circus in Australia would look very different.’

Elsewhere, Borderville will honour the company’s origins with a brand new show, Back in the Big Top, featuring every member of the 2019 student cohort aged 8 to 19. After its short Albury season the production can also be seen at Sydney Festival in January, under the new title, Time Flies.

‘We really wanted to honour a whole lot of conflicting desires from our community. One of them was to celebrate the founding members and mark that sort of nostalgic moment of beginning, and we’re doing that by re-creating the first moments of the organisation by putting a tent in the park across the road and putting on a show with all the current crop of Fruities in it,’ Davey explained.

‘But we also want to honour all of the kids who have been through – and not just the kids, but the parents and the people who have worked here for all that time, and the community members who helped put up the tent for the first couple of years, you know? We want to have a celebration for all of those people in different ways.

‘We’re also yarn-bombing the trees around the tent pink and white, in a nod to the first tent, which was what we call “The Big Pavlova,” a big pink-and-white striped tent. It’s going to be great fun,’ Davey said.

Hull too is excited by the Borderville program and by what it represents. ‘I always look forward to the performances and to the kids and to the joy; that sheer pure energy of the young people on stage who are still too young, most of them, to have become cynical and overly critical,’ he laughed.

‘They want to perform, they’re excited about the opportunities we’re able to present and that positivity is so infectious.’

It’s also a rare opportunity to acknowledge and celebrate ‘those amazing, passionate, visionary people who started the company and who have kept the company going over the years,’ Hull said.