20×20: Your guide to navigating uncertainty

Celebrating 20 years of ArtsHub, we revisit this article from 2016 looking at uncertainty – a topic that's clearly timely, and which Madeleine Dore describes as a 'natural condition of making art'.
Madeleine Dore 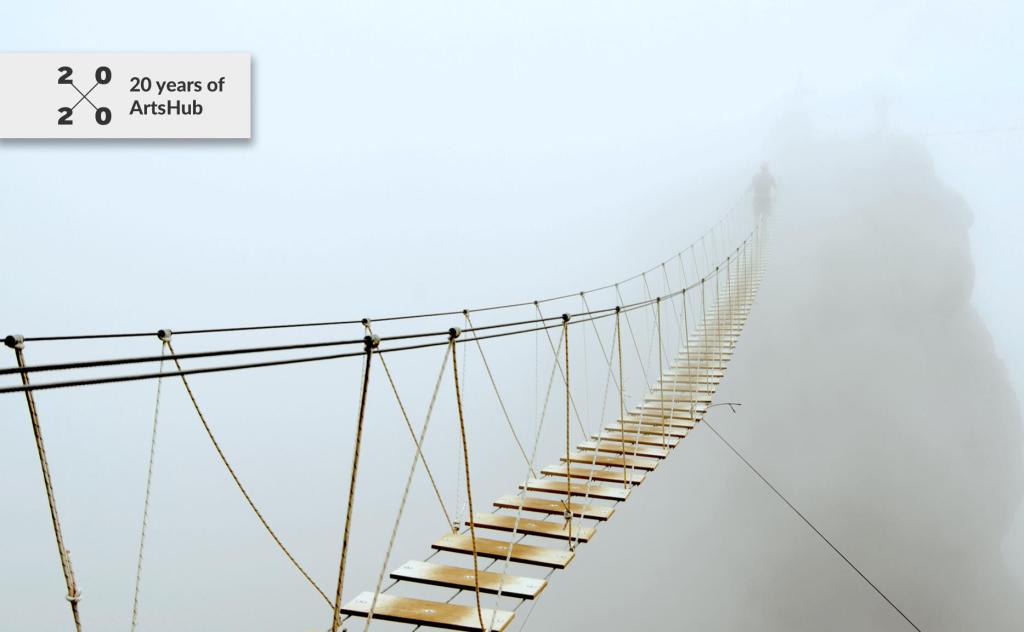 In celebration of ArtsHub’s 20th anniversary, our 20×20 series revisits the cultural milestones and trending topics that shaped the sector’s past two decades.

When this article was first published in November 2016, the uncertainty we face today was far from writer Madeleine Dore’s mind. However, the issue of uncertainty has long plagued the arts. Here, we explore how the sector’s perspective has changed on this important topic… or has it? Curiously, Dore’s piece was written in the wake of a US election, another of which is now looming.

The results of the recent US election (2016) have thrown the world into a spin, with the unexpected triumph of President Elect Donald Trump. Global uncertainty has been amplified, as the volatile stockmarkets which followed the election showed.

Particular events whether a surprise election result, a natural disaster or a friend diagnosed with a terminal illness serve to puncture our day-to-day sense of security.  Yet everything in our world is always uncertain, whether or not we recognise it.

‘I think certainty itself is an illusion and it is a temporary illusion that stems from the need for control – as humans, we often seek control when actually we have very little,’ said coach and manager of Compass Leadership Program, Julia May.

How we respond to uncertainty depends a great deal on our upbringing and social context. Poet Omar Sakr observed that the election of Trump seems to have derailed the certainties of white liberals far more than those from minority backgrounds.

‘I’ve noticed that my white friends have been affected by the recent Trump win far more than my friends of a cultural or linguistically diverse backgrounds. I have found that very interesting. I wonder if it has something to do with their sense of certainty being upended in a way that people who are from diverse backgrounds are in some way used to – we are used to having our sense of the world and its order and our place of it upended or repressed or distorted, and so in some sense we are always fighting that and we have a measure of toughness towards it, perhaps,’ said Sakr.

Sakr, who describes himself as ‘a bisexual Arab from Sydney’ said his personal upbringing had somewhat immunised him from the expectation of certainty which throws many people.

‘I don’t know what certainty feels like – I grew up with my auntie for the first six years of my life and it was only around then that I met my mother for the first time and realised that the person I thought was my mother was actually my auntie.’

As a poet, uncertainty can have an advantage. Artists need to be comfortable with uncertainty as it is a condition of creative practice.

Many well known artists have advocated for purposeful uncertainty. In his advice to artists, David Bowie said: ‘If you feel safe in the area that you’re working in, you’re not working in the right area. Always go a little further into the water than you feel you’re capable of being in. Go a little bit out of your depth and when you don’t feel that you’re feet are quite touching the bottom, you’re just about in the right place to do something exciting.’

Keats coined the term ‘negative capability’, to describe the quality of ‘being capable of uncertainties, mysteries, doubts, without any irritable reaching after fact and reason.’

It is when you are uncertain that you are truly creating. ‘If you do know what you are going to produce, what the hell are you doing?’ said Croggon.

‘You don’t know, it’s always a gamble. It might work or it might not, and that is part of why you do it I think, you want to explore, you want to push and that means you don’t know what you are doing a lot of the time,’ said Croggon.

Read: How to deal with uncertainty – Trisnasari Fraser (2020)

There are practicalities you can put in place to mitigate uncertainty – day jobs, education, learning new techniques – but without some uncertainty, it’s not art.

‘If uncertainty isn’t a part of that then you are just joining lines between dots, you are not exploring,’ said Croggon.

But even for those who have a relatively sanguine attitude to change, uncertainty can be difficult. It is hard-wired into us to have some fear of the unknown.

Sakr noted an important distinction when uncertainty tips over into anxiety and, potentially, depression. ‘Writing helped me to find my feet again – it’s almost a futile away of trying to establish some sense of control of what is an uncontrollable world.’

He recommends three tools for dealing with uncertainty: ‘Talk to people – the act of sharing the angst can be enough to offset some of the uncertainty; Read – books can provide delight in language itself and help you step away from it but not too far; and the third is walking. Take very, very long walks.’

Croggon said it is crucial to set aside time for doing things that aren’t art, such as working in your community. ‘There are all sorts of ways you can work for your beliefs and they matter also.’

Artists tend to be big thinkers and thinking about the big issues of global uncertainty can easily spiral into a sense of pointlessness or hopelessness.

‘It’s a question I ask myself all the time – does what I am doing really matter when there is climate change, environment destruction, extreme right-wing everywhere, etc, etc, etc,’ said Croggon.

‘I think that is a real question and worth asking. There is no easy way around that – if you are an artist and you are living in this world and you are privileged enough to make art, there are lots of people in the position who are unable to, I think you have to ask that question.’

Croggon advocates for making work that ‘absolutely matters to you’. ‘It’s not about another step in your career or a point on the board – you are in the business of making meaning,’ she said.

Choosing uncertainty in your career

Croggon points out that the economic conditions of being an artist amplify the personal burden of uncertainty. ‘If you decide to be an artist you live with that material uncertainty in a society that largely doesn’t really recognise what it is you do or doesn’t understand what it is,’ added Croggon.

Whether it be quitting your job, starting something new, creating a show or exhibition, or your daily art practice, so many decisions we make in life are not able to be deemed the ‘right one’ until we try.

When making a decision that amplifies uncertainty or feelings of vulnerability, it can be helpful to remind yourself of other instances where you have taken a risk and survived it, explained coach and author of the forthcoming The Leap Stories, Kylie Lewis.

‘We need to be self-aware and recognise that in spite of being uncertain within yourself, know that you have the resources to be able to handle it. Remind yourself that you have done this before,’ says Lewis.

Also recognise it’s okay to change your mind. ‘You’re doing the best you can with what you know and what you have i this point in time. Cut yourself some slack and tell yourself this is what I think is right and where I think I’m going – it doesn’t mean it’s concrete or can’t be changed.’

Julia May agreed, calling it the ‘test and learn approach’. She continued: ‘Test something out and see if you like it and if it doesn’t work out try something else – you don’t need to wait and feel certain before trying something out.’

What we can control is our own response to uncertainty, whether that in the form of being resilient or brave. Think about reframing uncertainty as courage.

‘If you tell yourself that 99% of the time you’re going to be courageous, you will be more included to try something you normally wouldn’t rather than waiting to feel completely certain.’

Don’t be certain, be courageous, concluded May. After all, going a little further into the water makes life more interesting.