Congealed naturalism: how the dominant mode is smothering innovative theatre

Has a preference for television-style realism resulted in most Australian theatre becoming about as interesting as muesli?
Ben Brooker
[This is archived content and may not display in the originally intended format.] 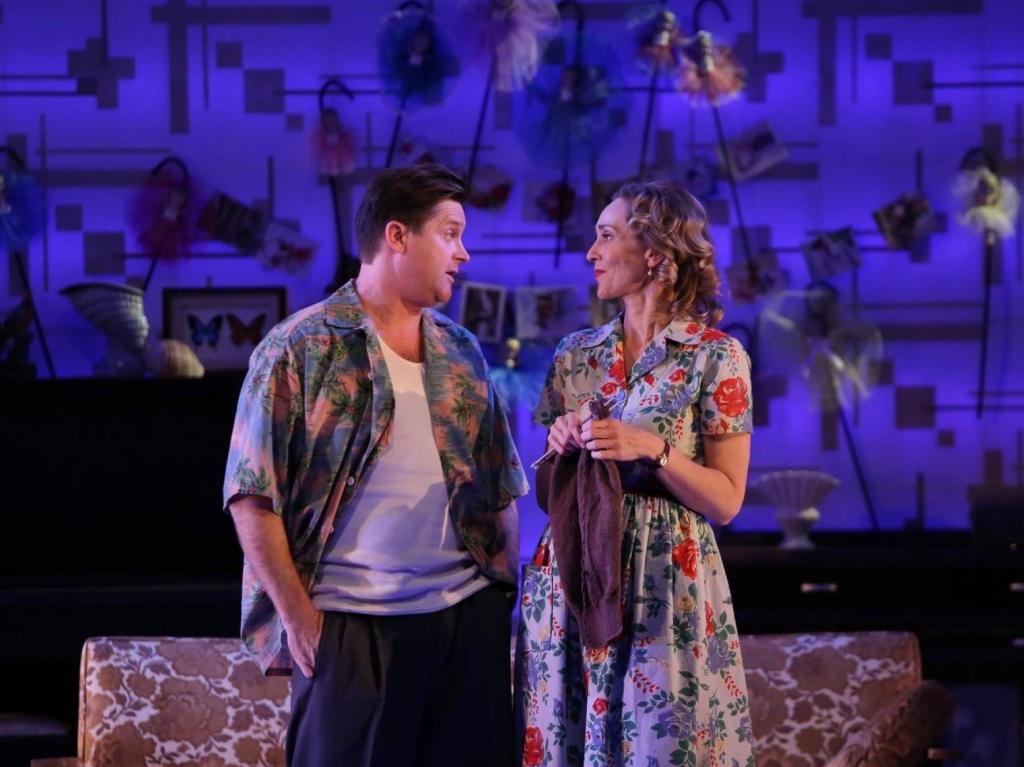 A scene from Black Swan’s 2018 production of Summer of the Seventeenth Doll. Photo: Philip Gostelow.

It was Neil Gaiman who said that when people tell writers something is wrong with their work they are almost always right, and almost always wrong about what it is and how to fix it. The same could be said of the public debate around our theatre.

The way we tend to talk about plays reflects the way they’re spoken about – to the extent that they’re spoken about at all nowadays – in our mainstream media, where the discussion usually takes one of two sharply abbreviated forms: the review, in which the merits of individual productions are enumerated; and the polemic, in which, generally speaking, one or another straw men is put forward to explain all that is wrong in our theatre. Remember all those arguments about adaptations versus new plays?

I must confess, the original impetus for this essay ran along these lines. Anybody who has been to the theatre more than a few times in this country will be familiar – perhaps, like me, to the point of near exhaustion – with a certain kind of play that can broadly be described as naturalistic: small cast comedy-dramas, usually with a contemporary rural or middle-class setting, on a topical social theme. Thinking polemically rather than dramaturgically, I wondered – along with many in what Roland Barthes called the ‘writers, intellectuals, teachers’ category who have gone before me – if realism, in all its flat, affectless mimicry, was to blame for what is lamentable about Australian playwriting.

At their well-made, well-acted best, such plays achieve an affecting verisimilitude, reflecting back to us our own world in ways that reveal it anew. At their worst, they feel lazy and clichéd, bereft of ideas, the plot and characters necessary to give them dramatic force, or both. With no central question or conceit to explicate or resolve, they become exercises in what Jana Perković has called ‘the dramaturgy of soap opera’ (see the satirical Tweets from the Australian Theatrical Cannon twitter page for an expert skewering of this sort of thing).

Generally speaking, I seek out work that, conversely, feels uninflected by the language and structure of naturalistic TV, that challenges rather than affirms, and that seems to constitute itself from something other than the quotidian world. Work that is, in Scottish playwright David Grieg’s phrase, ‘ambiguous and resonant’ – qualities that, for me, better describe life as most people actually experience it than the stage realism that insists on its ability to ‘tell it like it is’.

But I’m not sure any ‘type’ of play, whether naturalistic or not, is more likely to answer to my prescription for a good night at the theatre, in which I’m guided by poet and critic Kate Middleton’s set of questions for assessing a poem: ‘does [it] show you the “rules” by which it was written?; does it fulfil, or fruitfully deviate from, those rules?; and does it still surprise?’ In short, we might say, dramaturgical rigour, of the kind that can fail to coalesce around any production, be it a traditional staging of a canonical play in a 500-seat proscenium arch, or a contemporary work by an independent theatre company in a backyard shed. It is precisely this point that the debate about adaptations and new plays missed, eliding the fact that – according to research by Alison Croggon and Jane Howard – the number of new Australian plays being staged had remained more or less the same.

It’s often observed that box office results attest to the preference of Australian theatregoers for contemporary over classic work. That most of the former, at least that which is programmed by our major companies, is naturalistic in form receives less attention. It may not be true that naturalism is the cause of our bad theatre, but it is almost certainly what most of it looks like. As Julian Meyrick, director and theatre historian, told me:

Because of the abbreviated thinking involved in dealing with realism, the fact that companies, and indeed the interpretative artists who are involved in stage shows, don’t really have to think very much about it there is at the heart of it sometimes what you might call a congealed centre. It’s interesting to think about why Zola wrote his manifesto on naturalism. Basically, because theatre in his day had become middle-of-the-road, not very interesting, had kind of settled into its conventions, and wasn’t really thinking about its imaginative capacities. And now, 150 years or so on, we’re in the position where the vehicle that he championed as the transformative force for theatre has itself acquired the same defects and vices. It’s become unreflective, it’s become if you like unambitious, it’s become risk-averse.

It’s these kind of observations that led, in the mid-2000s, to the ‘Monsterist’ movement, which saw a group of British playwrights write their own manifesto calling for ambitious plays with large casts. One of the Monsterists, Colin Teevan, summed it up this way: ‘There’s been a predominance of television realism and of a section of the critical culture that demands a moral message from new writing. This is in danger of making theatre about as interesting as muesli.’

It may not be true that naturalism is the cause of our bad theatre, but it is almost certainly what most of it looks like.

The truth, however, is that all Western playwriting, even at its most innovative, has its basis in naturalism. Our theatre, stretching back to the plays of Sophocles, Aeschylus, and in particular Euripides, is mimetic – that is, imitative of reality – rather than hieratic – highly stylised and formal, though no less meaningful if you know what you’re looking at – as in the Asian traditions of Kabuki, Noh and others.

In contrast, naturalism is inherently unstable, its shelf life short. Once considered unflinchingly lifelike, it doesn’t take long for the work of naturalist playwrights to start to look positively baroque. It’s why even canonical stage works are so often ‘updated’, their dialogic excrescences chipped away by playwrights attuned to the contemporary vernacular. Nobody now would consider Zola’s stage plays as anything but high melodrama. In this way, naturalism is not just a set of theatrical conventions that inhere within plays, but also an ever-changing contract that exists between audiences and artists.

Which is why it’s hard to talk about theatre without talking about plays. How are genre labels to contain, say, the oeuvres of Louis Nowra, Dorothy Hewett, Lally Katz, Angus Cerini, or Nakkiah Lui? Each, with varying degrees of knowingness, both invoke and subvert the conventions of the naturalistic play. Hell, even David Williamson, the embodiment of a whole strand of naturalistic Australian theatre, deploys non-realist devices in plays like The Department and Dead White Males.

Equally, it makes little sense to talk about plays without talking about productions. The history of Australian playwriting is, as much as anything else, a history of playwrights struggling to secure the kinds of relationships – to directors, designers, and theatre companies – necessary to bring their unique visions into being. Think of Jim Sharman’s revelatory productions of the plays of Patrick White, or Australian Nouveau Theatre’s 1983 version of Ray Lawler’s Summer of the Seventeenth Doll, which saw Olive and Bubba dressed in classical Greek draperies and a set design inspired by surrealist painter Paul Delvaux.

How are genre labels to contain, say, the oeuvres of Louis Nowra, Dorothy Hewett, Lally Katz, Angus Cerini, or Nakkiah Lui? Each, with varying degrees of knowingness, both invoke and subvert the conventions of the naturalistic play.

Think, too, of one of the most celebrated independent theatre stories of recent times, Griffin Theatre Company’s production of Angus Cerini’s The Bleeding Tree as directed by Lee Lewis. What is critical in these examples is not contained in formal distinctions, but in the meeting of the production’s sensibility and the intentions of the playwright (or director – Lawler was as surprised, and ultimately delighted, as anyone to see his naturalistic play transformed into something like a classical tragedy). In this I’m reminded of Luis Buñuel’s assertion that ‘fantasy and reality are equally personal, and equally felt, so their confusion is a matter of only relative importance.’

So what are we to do? The Monsterists’ recommendations for revitalising a moribund theatre included a year-long moratorium on Shakespeare and a ‘dead writers’ levy’ whereby every time a play is put on by a non-living writer, to whom no royalties are owed, an equivalent sum is paid towards a fund supporting new work. Both creditable ideas, and ones I have heard touted by senior theatre figures in Australia too, but, coming from the ambitious Monstersists, I can’t help but feel these fixes lack, well, ambition. The way new work is handled at our major theatre companies requires more than tinkering with; it needs a wholly new approach towards risk in its structures of development, programming, and production.

A tall order in the current funding environment perhaps, but it’s an idea with a simple enough premise. That, as Meyrick put it to me: ‘The job of new drama, whether it’s realist or non-realist, is not to give us a secure night in the theatre, and persuading ourselves that we need to completely change our attitude towards theatrical production so as to better enable this is probably the main task at hand.’