Two exhibitions with a very different tone, both focus on similar contested relationships to land, but derive from a different cultural perspective.
Helen Wyatt
[This is archived content and may not display in the originally intended format.] 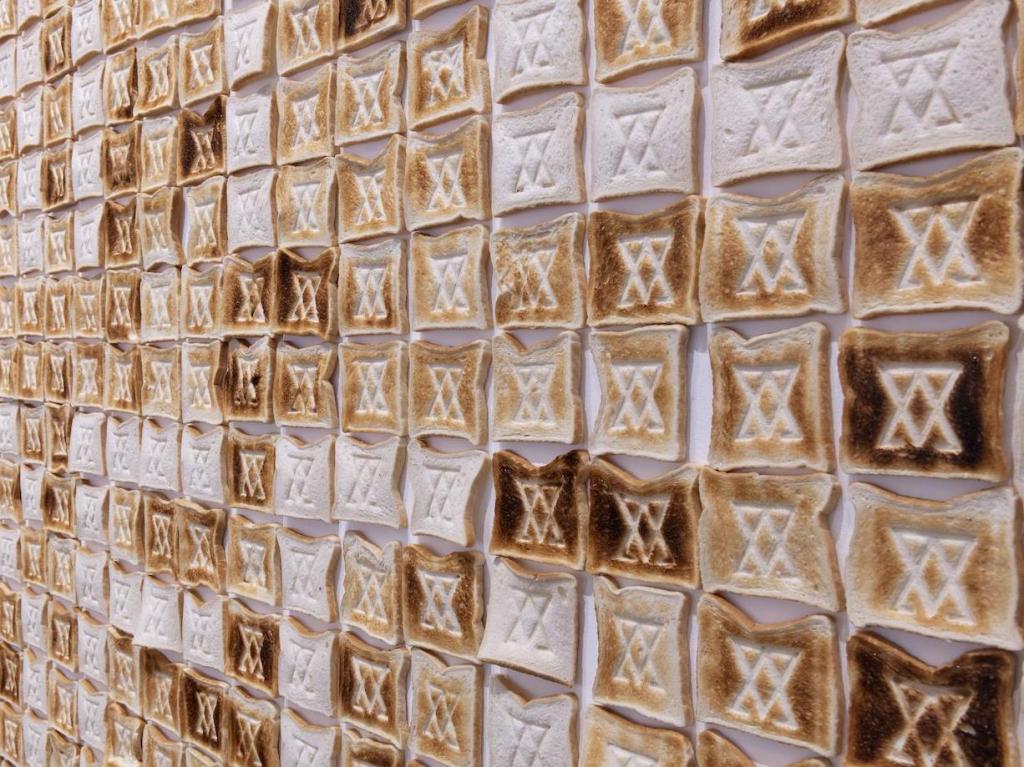 In a tough, necessarily blunt, yet often witty and lyrical way, Jason Wing challenges dominant accounts of Australian history in his exhibition The Presence of Absence at The Glasshouse Regional Gallery, Port Macquarie.

The new installed works are largely derived from the artist’s research into the colonial incursions of the Port Macquarie area. Land and convict management are the themes through which Wing re-interprets evidence – some drawing on the fabric of The Glasshouse cultural precinct itself.  Through his work he helps us to see and feel differently.

It is a complement to the seductive and compelling images by Nicole Welch in her exhibition, Silence & Solitude: selected works from Eastern Interiors in the adjacent gallery space. These works focus on similar contested relationships to land but derive from a different cultural perspective. More on these works below.

Jason Wing is a Sydney based artist who strongly identifies with his Chinese and Aboriginal Biripi heritage. He has strong links to the mid-North Coast area of NSW. This exhibition was developed during his residency at the Glasshouse Regional Gallery in June. While the issues draw strongly on this particular location they can be extrapolated to the impacts of colonial expansion across Australia.

On entering the main gallery visitors can’t fail to see the strong diagonal of installed bricks that mark out the word ‘FOUNDATION’. On further looking, it is obvious that these bricks lie on a foundation of shells – midden shells that once formed the lime that bonded the bricks. Midden shells are a primary source of evidence about food and land management by Indigenous people all over coastal Australia. This presence becomes absent when subsumed into building foundations that support a colonial regime and its land control.

But there are other symbolic foundations. Captain Crook, Wing’s iconic bust of Cook with the black balaclava, is part of this show and has been part of the Defying Empire: 3rd National Indigenous Triennial at the National Gallery of Art in Canberra and at University of Queensland Art Museum.

Wing symbolically links Cook to Governor Macquarie. Both men were the agents of colonial force. The artist has inscribed Macquarie’s chilling edict from 1816 in red on the gallery wall – an edict that effectively calls for the imprisonment and murder of Aboriginal people. 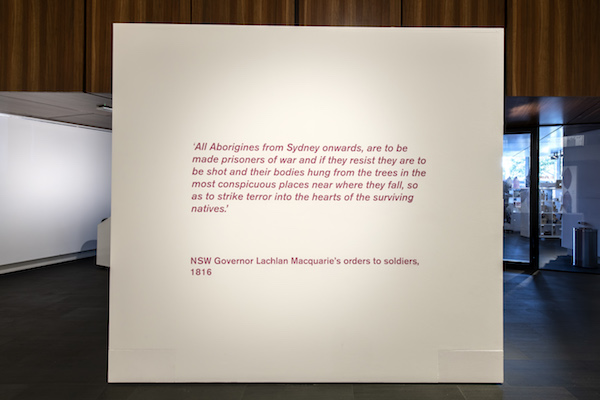 At the same time, Wing’s work is beautiful even when it is telling a tragic story. It is worth taking the time to study the surveyors’ marks that adorn steel shields and to reflect on the visual puns he delivers using spears and rulers. He both abuts and synthesises ideas about land demarcation and management. 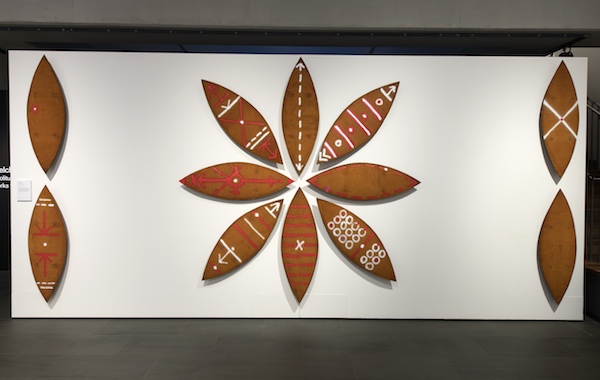 It is confronting to be looking at the aesthetic arrangement of toast on the gallery wall (pictured top) and then learn the horror story that lies behind the work – the deliberate poisoning of people with damper laced with arsenic.

Other absences are of indigenous materials and tools. A visit to the local museum down the road holds a few of these but it is overwhelmingly a story of convict management and colonial expansion.

In contrast, Wing frames the convict story as one of slavery.

The history revealed in the show is provocative and cannot be unseen. It is something that visitors to the gallery will be enriched by and probably feel compelled to reflect on in relation to their own homes, towns and landscapes.

Nicole Welch’s show draws on documents by explorers across terrain beyond the Great Divide.

A quote from the Gallery describes: ‘Silence & Solitude: selected works from Eastern Interiors explores the Bicentennial year of the settlement of Bathurst (1815) and the subsequent opening of the eastern interior of Australia to exploration. Nicole followed the early pathways journeyed by European explorers, stopping at significant locations to enact installations in the landscape. The writings reveal the thrall and fear of an alien landscape and they inform the locations that form the basis of Welch’s photographs. …The English explorer Thomas Mitchell depicted these regions in his journals of discovery titled, Three expeditions into the interior of Eastern Australia, 1835 from which the title of the exhibition is borrowed.’ 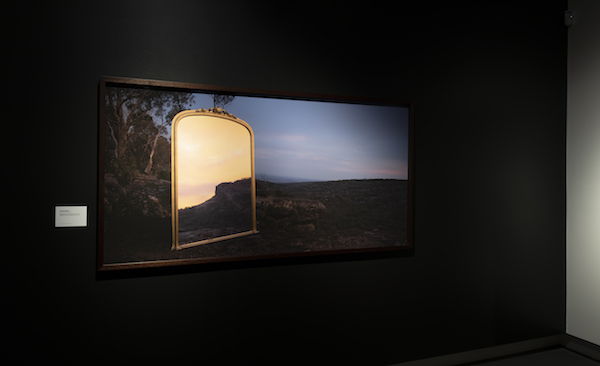 In this small but powerful 2018 exhibition a handful of works have been chosen.  In a darkened room the viewer is invited to contemplate the beautiful photographs presenting a mirror located upon and within the landscape. They reveal sublime places juxtaposed against more expansive views reflected, but contained, within an antique gold frame.

The curator, Bridget Purtill has also included a video work by Welch of an endless moving sky also contained within a mirror’s frame.

Welch has European and British heritage and she brings an historical awareness to present a sensitivity in this work we need to consider about our complex relationships to landscape.

Take the time and spend the kilometres checking out the regional centres. The Regional galleries hold treasures and the current exhibitions at The Glasshouse are worth the effort.

Jason Wing, The Presence of Absence

Helen Wyatt is a visual artist undertaking higher degree research in Jewellery and Small Objects at Queensland College of Arts, Griffith University. Her own practice draws on fragments and traces found in places where industry and nature intersect.