Behind the Beautiful Forevers

Behind the Beautiful Forevers explores the honorable inner-life amidst bone-crushing poverty, violence and systemic corruption.
Liza Dezfouli
[This is archived content and may not display in the originally intended format.] 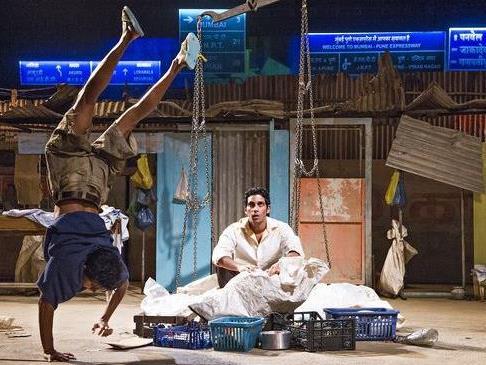 ‘I hate bottle tops,’ says Abdul. ‘They’re metal and plastic, and it hurts your fingers trying to separate them.’ Not a problem most of us would ever face, but for Abdul Hussain (Shane Zaza; watch out for him) life literally depends on his skills in sorting plastic from metal. Thanks to Abdul’s commitment to endless work, his family, headed by his resourceful and wonderfully foul-mouthed mother Zehrunisa (the incomparable Meera Syal), it has begun to prosper. As if life wasn’t hard enough, when Zehrunisa decides to build shelves in her kitchen to keep the rats out of the rice, her envious bitter-minded neighbour, the disabled Fatima, takes vengeful action that ultimately sends the industrious Hussains into a version of bureaucratic hell where they must hold their own just to stay alive.

Playwright David Hare wrote Behind the Beautiful Forevers from the book by US journalist Katherine Boo. She spent three years living there and documenting the pitiless reality of life in the community of ‘Annawadi’, the Mumbai slum next to the city’s airport, realised in this miracle of a production by the National Theatre. The title refers to billboards advertising a tile company, which separate the slum from the exclusive hotels on the airport side: ‘The ashes from our rubbish fires fall into their swimming pools,’ notes one inhabitant with relish. The astonishingly vast and vivid design is by Katherine Lindsay, bringing the activities and lives of a community believably to the stage.

Hare’s instinct for story means the staging of Boo’s book is both epic and personal. Direction is by Rufus Norris (who has taken over the captaincy of the National Theatre from Nicholas Hytner), and he keeps the cast busy moving and working throughout; there is no inviting an armchair traveller to sit back and be simply entertained or to see life in Annawadi as romantic or colourfully exotic. More than 30 actors are involved, all of them are of what the Brits call ‘Asian’ (meaning Indian sub-continental) descent, a first for the British stage. As Meera Syal points out in an interview, it’s a first too, to see a play featuring three strong female Asian leads. The play is weighted nicely to give a sense of everybody’s lives, despite there being so many stories to tell. Just one of a few tragic subplots concerns young Anjana (Manju Wagheka), desperate to improve herself but denied any education and about to be married off to an old man in a distant village; she sees no opportunity to lead life on her own terms.

Seeing this leaves you with a sense of indescribable good luck in living in Australia, but more importantly, Behind the Beautiful Forevers leaves you with a better knowledge of the struggles of real people living this kind of life. The play delivers a heartbreaking sense of how corruption can affect the lives of those living next to nothing.

Hare has noted elsewhere that westerners are inclined to see victims of grinding poverty as being numbed by hardship, concerned with subsistence only, and that one of the things he wanted to achieve in this play was to show how the inner life of a rubbish sorter isn’t that far removed from yours or mine. How to live decently according to your own values is the big question for Abdul, and his integrity, his courage, and that of his father and most of their fellow inhabitants of the slum, in the face of inequality, systemic corruption and monstrous violence, is truly affecting. Fantastic stuff.

Behind the Beautiful Forevers
National Theatre Live at Cinema Nova