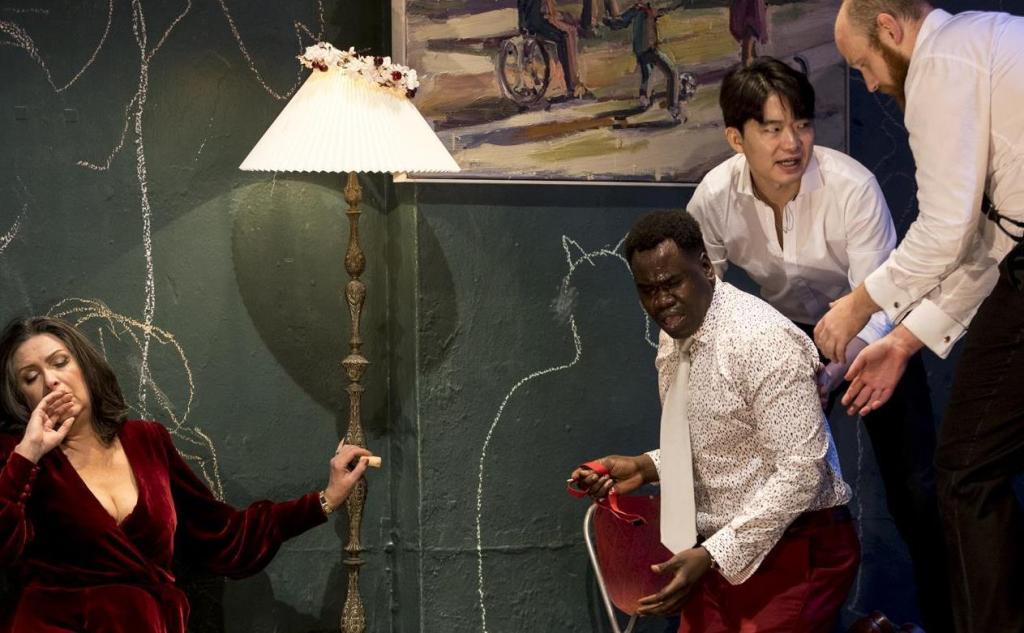 The tension inherent in the tragicomic The Cherry Orchard lies in Chekhov’s ambivalent portrayal of an aristocratic family’s loss – due to socio-economic revolution – of their ancestral estate, upon which grows the eponymous orchard. The audience is confronted by their sympathies and prejudices: do we align with the conservative order and its attendant aesthetic of nostalgia? Or with the righteous ideologues of wealth redistribution, however uncomfortably they wield their rough and pitiless scythes?

Written more than one hundred years ago, when the Russian Revolution was in foment, Chekhov essentially pits Ranevskaya, the doomed and bereaved matriarch (played by the devastatingly brilliant Pamela Rabe) against Lopahkin, (Mandela Mathia), the aspirational grandson of a serf, who seeks to buy the property, chop down its trees, and modernise.

Director Eamon Flack sets his Orchard in an ahistorical ‘nowhere’ – rather than as the ‘museum piece’ one tends to associate with staging Chekhov – though this is, at times, jarring: pop music from a record player, retro bric-a-brac etc. Where exactly are we? The original theme of class struggle collapses but expands into a worthwhile interrogation of its intersection with race, gender and sexuality. However, the lack of hard context and situational detail is incoherent. Is this Australia? Yes, and no. The comedic flourishes have all seemingly had the Louis Nowra treatment, and the translation is updated, still, the references remain located in a Mother Russia long ago lost.

The racially-blind casting is laudable; so too, is the decision to make Peter Trofimov, the firebrand student and paramour of Ranevskaya’s daughter Anya (Kirsty Marillier), into Petya – a role swung out of the park by Priscilla Doueihy – flipping dynamics and adding layers of textured complexity. Generational squabbles between boomers and millennials are framed by the sticking point of real estate. At one point, Ranevskaya spits: ‘If it has to be sold, then sell me with it!’ And the Belvoir audience members, somewhat ironically, erupt in laughter when Lopahkin, played by Mathia (of Southern Sudanese heritage), wryly complains: ‘Old white people are very hard to work with’.

Energy courses through the second half in a dance exuberantly choreographed by Elle Evangelista at Ranevskaya’s madcap party held on the day of the estate auction. However, somehow the emotional stakes don’t take full root as they might. The choice to keep the cherry trees as an abstract expression of background colour and in garlands of blossoms evokes a sense of something missing at the core, a hesitancy. While the cast is phenomenal, (Rabe, in particular, rips apart every scene she is in, even when she’s not the focus), the questions of tragic import the family ask themselves: ‘Have we been bad people?’ and their lament at the twilight of the Old-World aristocracy; ‘Such good, educated people. Such good taste…’ seems more relevant than ever in contemporary Western democracies, where the inequality gap is drawing us back into combustible times, and privilege and land rights must be addressed without dissemblance.