An experimental collaborative effort that explores a world divided into binaries.
Megan Koch 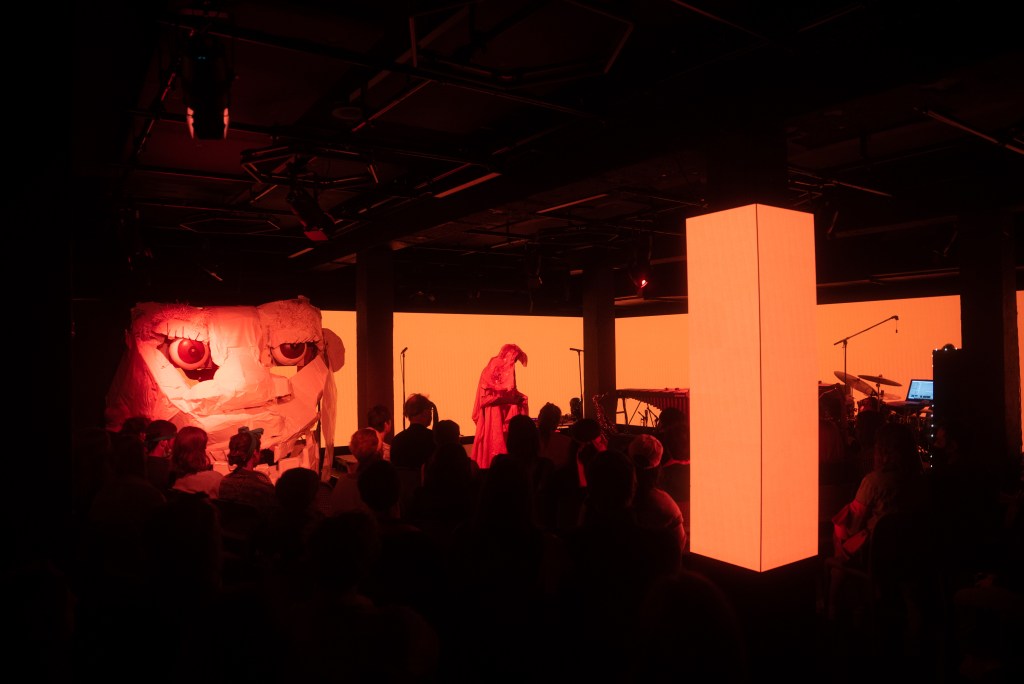 ‘There are plenty of cryptic moments to puzzle over here, some more captivating than others.’ Photo credit: Nick Astanei.

We’re still waiting outside the venue when it begins to dawn on me that the show may have already started. There are security guards wandering around, and it’s not long before one of them comes over. We’re told to fill out questions for a passport (which is either blue or orange), have our photo taken, and get our bags examined. When we’re at last allowed to step through the door, we find a room full of berobed denizens in elaborate blue masks wandering between the stage and the bar. A few have instruments. It appears we’ve landed in something like the cantina scene from the first Star Wars film, and I can’t deny that the prospect of spending a few hours in an alien jazz club is quite thrilling.

What follows is the latest collaborative effort from Slowmango – an SA-based jazz/funk/disco group – and the multidisciplinary arts collective Bait Fridge. It’s staggering to consider all the elements that combine to form one performance: the pre-show routine, the band, the installation that is finished mid-show, the ornate costumes (works of art in themselves), the lighting, the background graphics on screen, and the script that ties it all together in an interconnected narrative.

A voiceover reveals that the theme driving the show is an exploration of what it means to live with binaries. This world and its people, we are told, are entirely blue. As visitors this blueness is the first thing we notice, but the local residents have no awareness of something so pervasive and ingrained. The blue bandmembers begin to play (and as soon as they do I know that the music – infectious, otherworldly – is going to be a highlight of the show) while other figures toil away at finishing a large-scale puppet of an ominous face. We discover the purpose of this installation when it comes to life and begins coughing up people in orange costumes. A portal has been opened.

Throughout the rest of the show these colourful figures explore what it means to be blue and orange, asserting their identity through different artforms. Sometimes the groups are in conflict; at other points, dancing together under the flashing lights, it is difficult to tell who belongs to which colour.

There are plenty of cryptic moments to puzzle over here, some more captivating than others. While at times I worry that the issues being discussed are obscured by the show’s more bizarre aspects, I do have to admire this kind of artistic risk-taking since so much of the show’s magic lies in this spirit of experimentation. Perhaps being puzzled and delighted is more important than coming away with any single ‘message’. As a monologue near the end of the show suggests, binaries may be baggage, but they also provide a chance to play, to subvert expectations, and to tell stories.

In the show’s final sequence, the costumed figures return to the stage carrying rainbow-hued paintings and dressed as colourfully as a coral bed, swaying and twisting against all that blue. As the band starts up again and the whole team joins in a celebratory dance, I find myself hoping that this spectacle of collaborative, creative joy is some of kind of vision of our post-pandemic future. How exciting that it’s already begun.

Slowmango and Bait Fridge performed on 27 Nov 2021 as part of IMMERSE Adelaide 5 – 28 Nov 2021. They have collaborated on a series of performances throughout 2021 during a year-long residency at The Lab.