The Wharf Revue 2014: Open for Business

In a year packed with political controversy, the Revue team go from strength to strength
Suzanne Rath
[This is archived content and may not display in the originally intended format.] 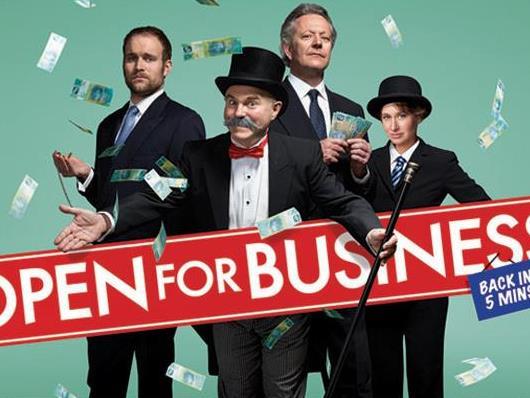 In a year packed with political controversy, the team behind The Wharf Revue must have been spoilt for choice when deciding what to satirise in their 2014 show, Open for Business.

The Revue’s title, Open for Business has obviously been taken straight from the mouth of the Prime Minister, and no political party or personality is safe from being the butt of a good humoured joke. Appropriately, the stage is set set up on a Monopoly board floor, featuring utilities such as Badgery’s Creek Airport and the Catholic Church for sale, and as usual a healthy swing is taken at how the richest in Australia have made their money via mining and investment banking.

The harsh budget is much maligned, with several breaks between acts peppered with mock ads for ‘Budget Warehouse’ featuring the likes of ‘Kevin Andrews’ extolling the virtues of the cuts that have affected every Australian, in the style of the well known Bunnings advertisements. There’s also a return of some old favourites: Amanda Bishop reprises her wonderful Julia Gillard character alongside Jonathan Biggins’ vitriolic Paul Keating, mocking the reluctance of both to give up the public stage. Bill Shorten and Tony Abbott also appear, of course, albeit as a koala and his arch enemy, ‘Goanna Abbott’, both minus most of the impersonations of their personal tics which were so amusing last year. Indeed, this sketch, ‘Blinky Bill’ is one of the weaker ones.

There will always be some misses, and fortunately for this audience, they are few and far between. While Miserere, dealing with the Catholic Church’s child abuse scandals, somewhat darkens the mood of the evening, most of the other pieces’ humour is refreshingly silly. Several of the best pieces, including Bob Brown and Christine Milne’s dance number, ‘Take Back Your Green Thing’ and the double-entendre-packed ‘Inbedded with the Morrisons’ teeter on the precipice of smuttiness but, thankfully, land on the side of gasping, bellyaching laughter. The four performers, including new recruit Douglas Hansell, couldn’t possibly work any harder in their all singing, all dancing roles.

Six of the seven strong team behind the Wharf Revue, including lighting designer Matthew Marshall and sound/video designer David Bergman, are veterans of the show, which explains why it’s such a well oiled machine. In Open for Business the creators take the many humorous moments in the past year’s politics and spin them into gold. The Revue team are going from strength to strength.