The Importance of Being Earnest 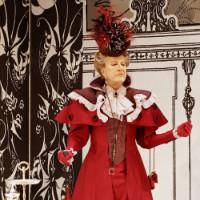 Oscar Wilde’s The Importance of Being Earnest, A Trivial Comedy for Serious People premiered at the St James Theatre, London, on February 14, 1895. Following Wilde’s first trial, it closed after just 66 performances and would not be staged again until the following century.

This new production of The Importance of Being Earnest is the swansong of the Melbourne Theatre Company’s outgoing Artistic Director, Simon Phillips. His last production for the company as their AD, it is also a remount of an earlier production of the play which Phillips directed for the MTC in 1988.

Three of the cast members of that original production – Jane Menelaus, Bob Hornery and Geoffrey Rush – take on the roles of the governess Miss Prism, butlers Lane and Merriman, and the fearsome society dame Lady Bracknell respectively (other members of that influential production, including legendary thespians Frank Thring and Ruth Cracknell, are now deceased). Phillips has also resurrected the late Tony Tripp’s original set and costume design; on opening night, the set – a circular, tiled stage supporting a vast book which opens page by page to reveal elegant, black and white Beardsley-esque interiors and gardens – rightfully received its own applause.

While some opening night nerves and stumbles were apparent, overall the cast acquitted themselves well, although Patrick Brammall as Algernon Moncrieff and Toby Schmitz as Jack Worthing seemed to struggle slightly with the pace of the play and Wilde’s glittering dialogue, and were consequently outclassed by their fellow thespians. Presenting the perfect mix of guile, charm and arrogance, Christie Whelan was delightful as the Honourable Gwendolen Fairfax, as was a radiant Emily Barclay, who shone as Jack’s charming young ward, Cecily Cardew.

Menelaus as Miss Prism was excellent, and Rush – the man everyone had come to see – was a delight as Lady Bracknell. Enunciating every word with precision and subtly underplaying his role, he became the personification of a Victorian society dame instead of a parody of one.

The weakest links in the cast were Tony Taylor as the Reverend Chasuble – he seemed far too young and ineffectual in the role – and Bob Hornery in the twin roles of Algernon’s arch manservant Lane and Jack’s elderly butler, Merriman. “It is not good for one’s morals to see bad acting,” Wilde wrote in The Picture of Dorian Gray, an aphorism Hornery might have considered before hamming up his Merriman quite so consistently. Mugging for a laugh once is amusing, but when the same shtick is repeated at every opportunity, it becomes grating.

Hornery’s overplayed doddering was indicative of the one real fault in the production: Phillips’ insistence on an emphasised physicality, which resulted in several jarring moments out of character with the Victorian tone of the play, – most obviously an exaggerated fight between Jack and Algernon just before interval, though a moment in which one gentleman patted the other on the arse later in the piece also jarred; it was a gesture more suited to a sporting field than a Victorian-inspired stage. At other times the physicality of the production was expressed far more gracefully, with the performers circling one another like automatons in a particularly complex and beautiful music box.

Phillips’ remounting of The Importance of Being Earnest risked being overly reverential, and consequently beautiful but lifeless, like a dragonfly trapped in amber. Instead, he has created a memorable and marvellous production of Wilde’s masterpiece: a beautifully paced, gorgeously staged work that gives free rein to Oscar’s wit and reinforces the play’s reputation as one of the best English-language comedies ever written for the stage.